We present to your attention new versions of the Minecraft PE 1.16 and 1.16.200! This is a free big update that has a large number of different changes in the Minecraft world, namely, a modified Nether world, new mobs such as Strider and Mountain Goat, and new unique blocks. Let’s take a look below at all of the above features of this update.

Many experienced players, or those players who have been playing Minecraft for a long time, know that since the appearance of the Nether dimension in the world of Minecraft, this dimension has not changed. This dimension was boring and uninteresting for most players, but with the release of the long-awaited Nether update, everything changed.

Minecraft PE 1.16 and 1.16.200 is a new update dedicated in part to the Nether world and the Mountains of the Minecraft world. For example, consider the already well-known biome called Warped Forest. This is a new mystical location located in the Nether world and has a large number of interesting structures and blocks. 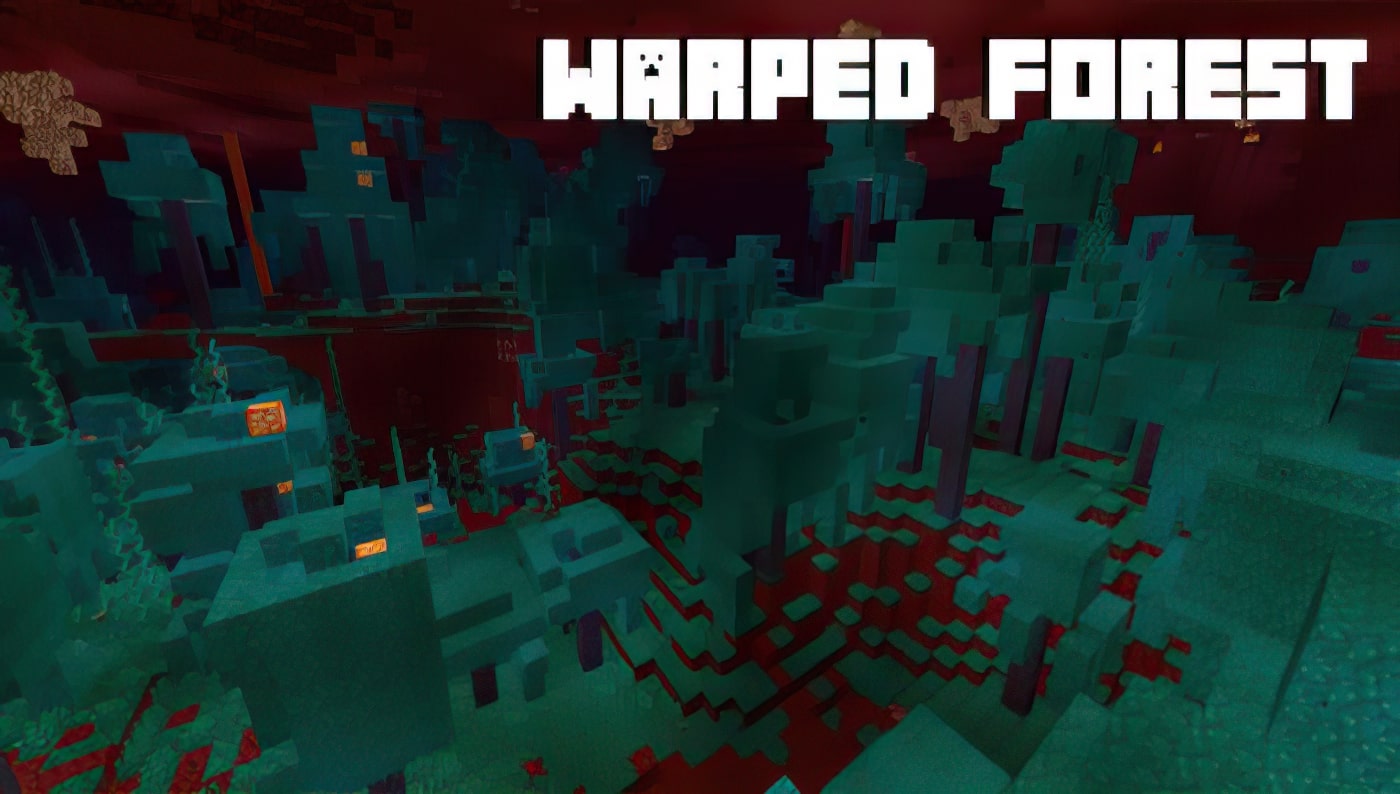 The mountains also now have new features which you can find out about below.

In the new update Minecraft PE 1.16 and 1.16.200, these aforementioned mobs deserve your attention.
First, Strider, a mob that lives most often near the lava sea, as well as in all biomes of Nether World. This mob can be very useful for players since after taming this creature, players can saddle it and cross the lava sea. In order for the player to be able to tame this creature, it is necessary to use a warped fungus. 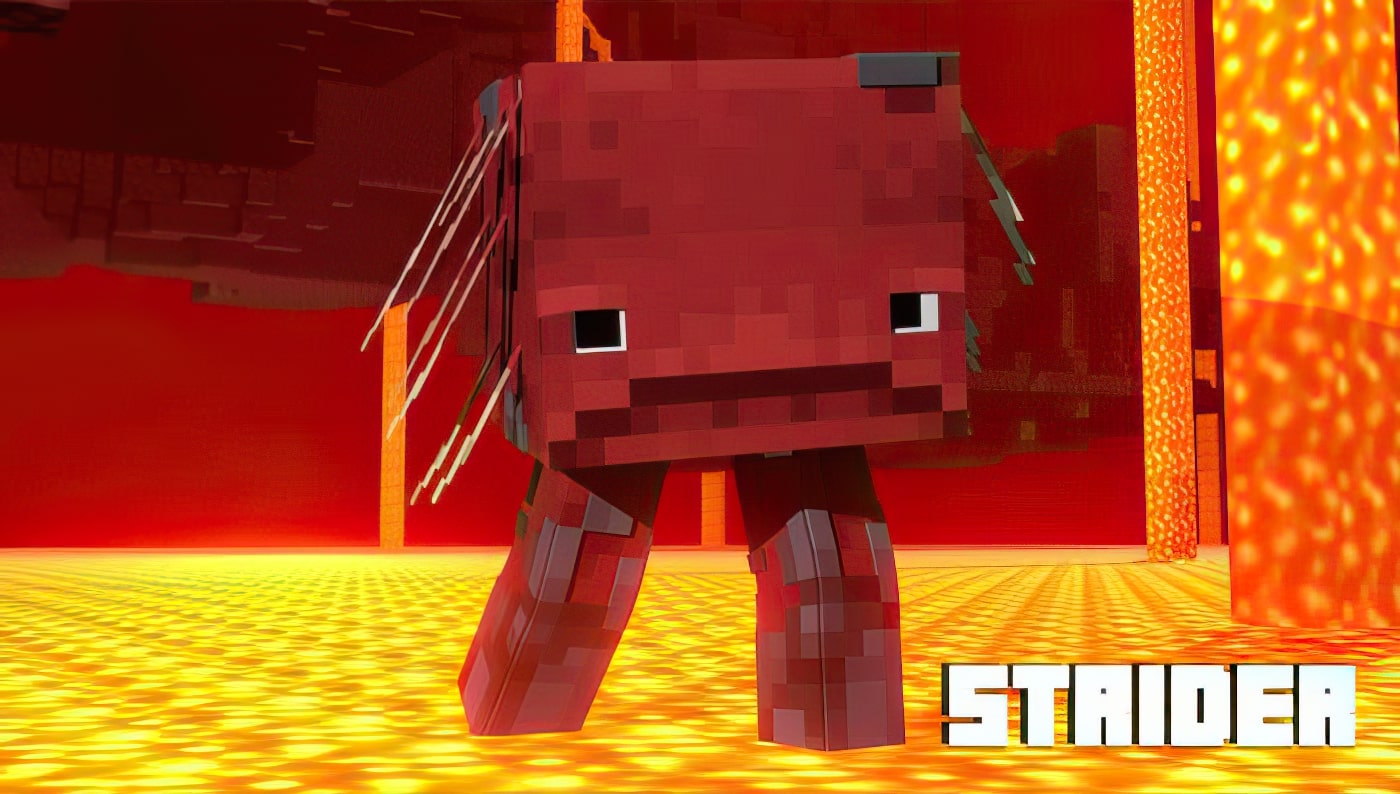 The second creature, namely the Mountain Goat, spawns in the Overworld in the mountains. This mob also has its own unique features. For example, his dexterity allows him to quickly and safely move along the tops of mountains, as well as jump high. Thanks to its jumps, this mob can climb to the very top of the mountain.

We also draw your attention to the fact that if a player invades his territory, he will defend it, in such cases a mountain goat can attack the player and hit with his horns, thereby knocking you back. By using wheat, players can tame these mobs. Using an empty bucket, players can milk a goat and get milk. 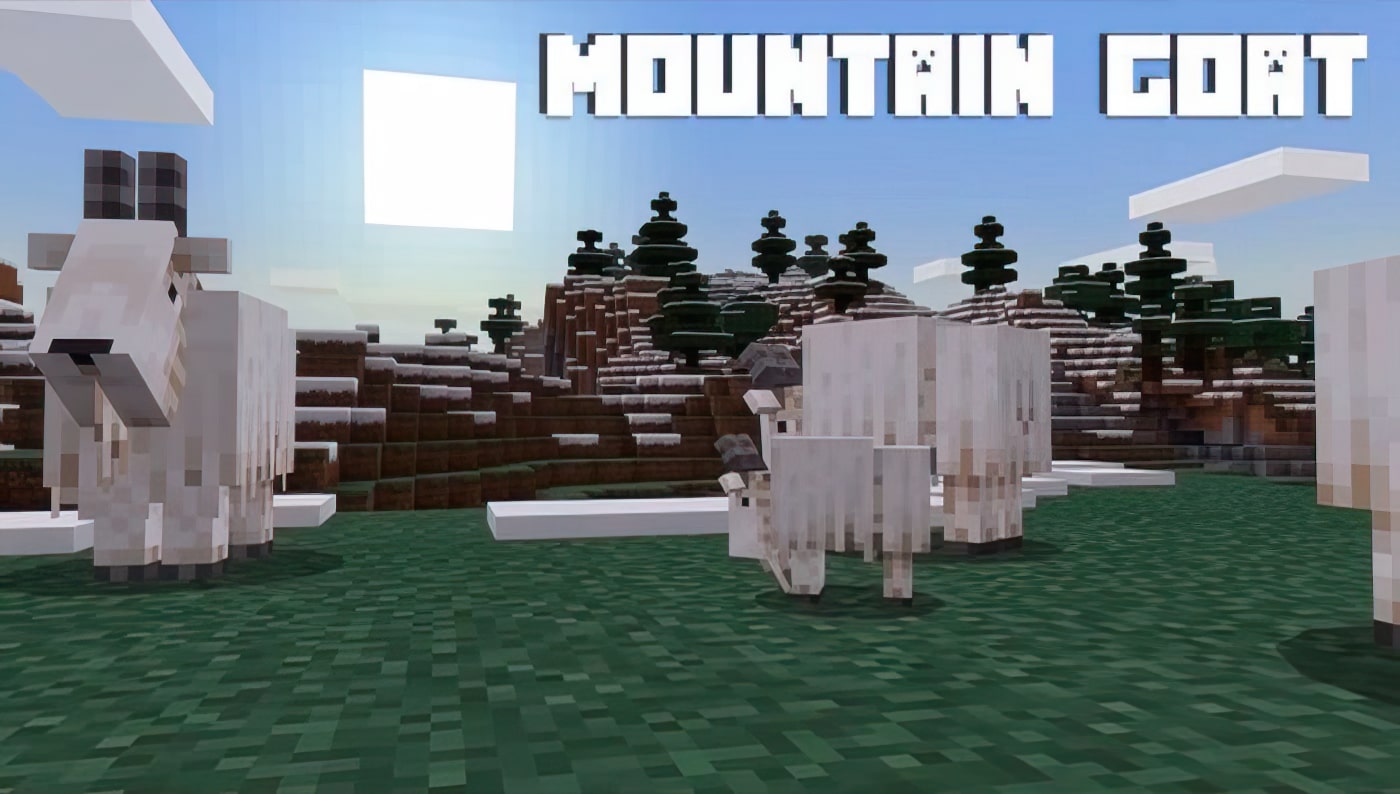 Now let’s look at the new blocks that have unique features for the Minecraft world.
With the addition of a certain block in the Nether world, players can not be afraid to die in this dimension, since the player, having died earlier in the Nether dimension, had to return to this world again.

This has now become much easier as players can place a new block that allows them to create a spawn point in this dimension. This block is called Respawn Anchor.
The new block allows players to get rid of the constant movement through the portal after each death in the Nether world. The main thing is not to forget to sometimes charge this block using the Glowstone block. 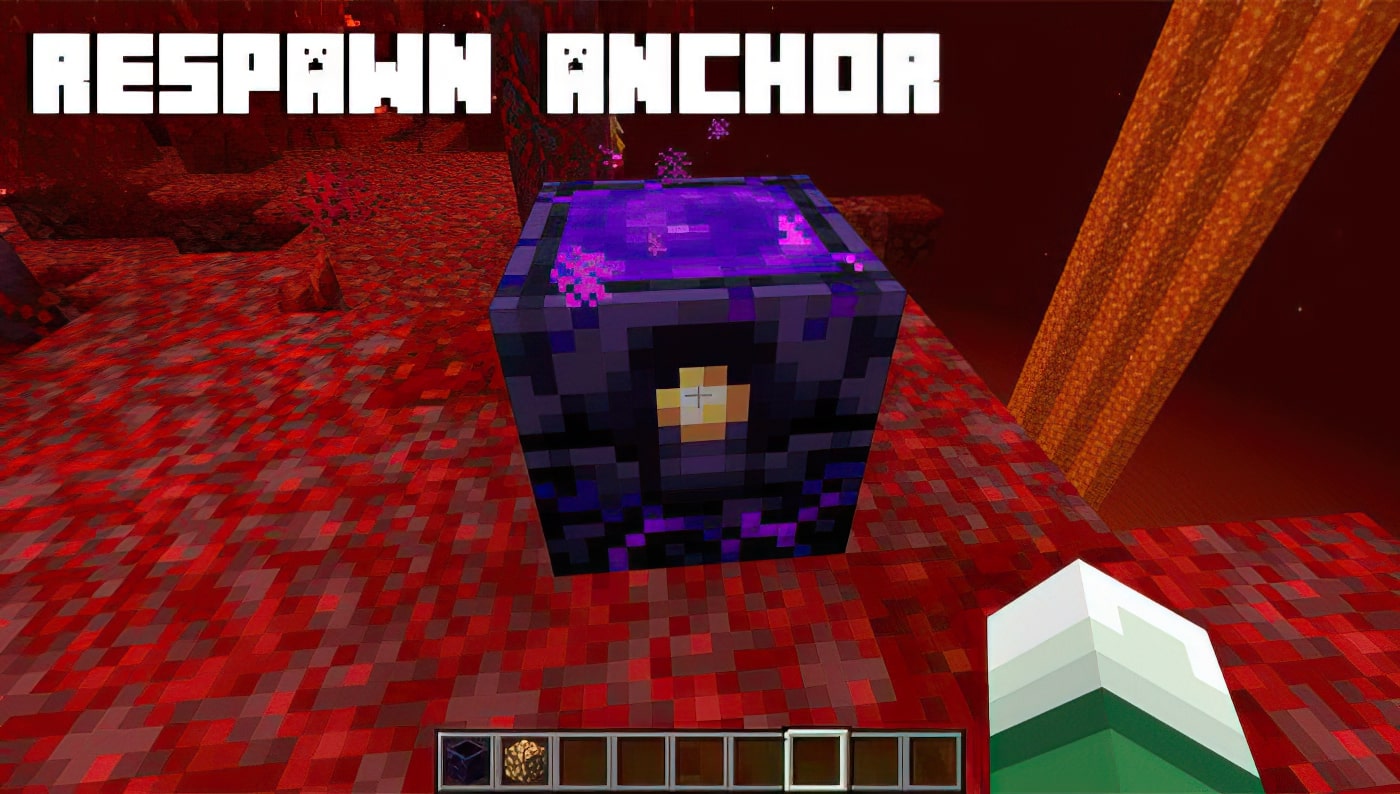 A second block that is no less interesting has been added to the Overworld in the mountains called Powder Snow. This block does not have any significant differences from a simple block of snow, but its main feature is that by stepping on it, a mob or a player can fall down through it.
This is a new opportunity to create new traps in snowy locations. To avoid falling through the snow, players can use leather boots. 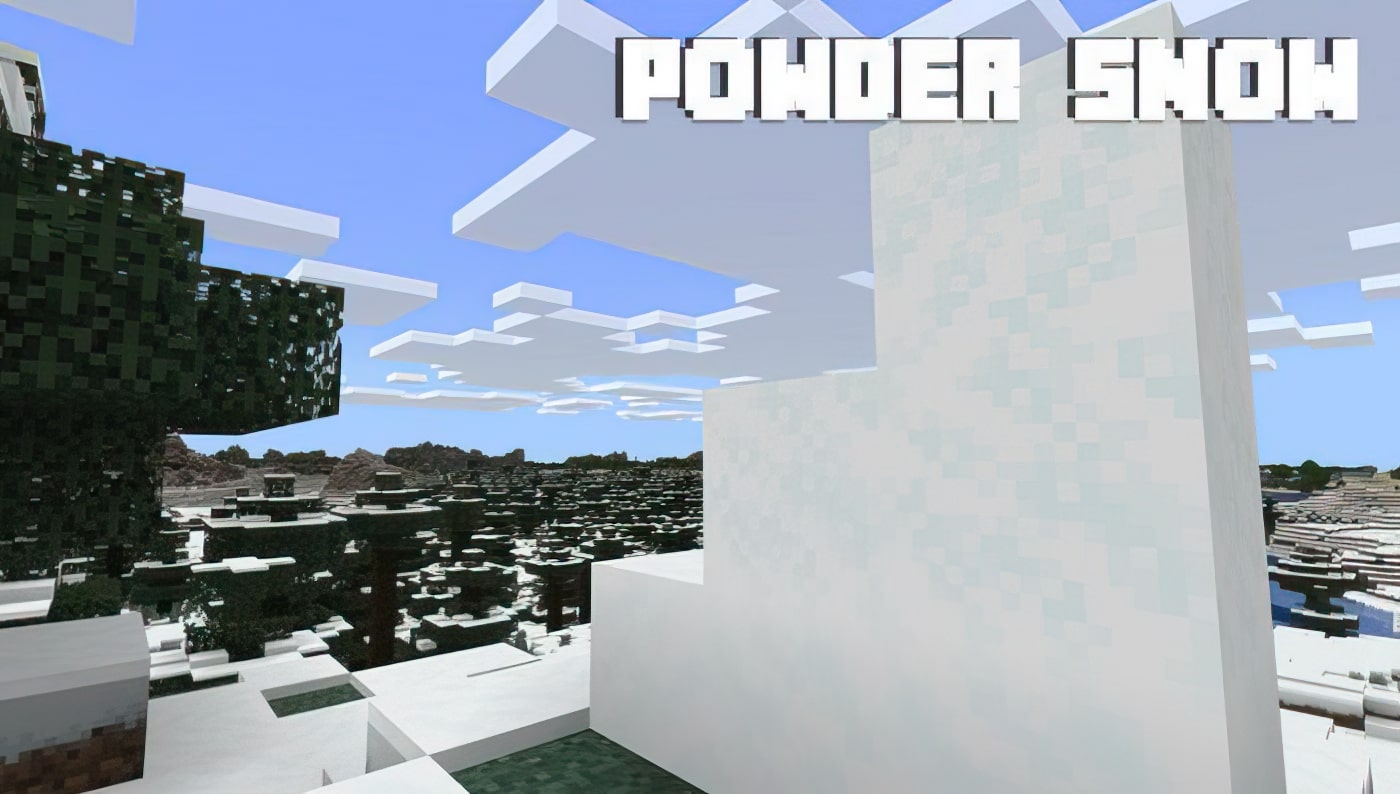 The new update for Minecraft PE 1.16 and 1.16.200 is already available to all users of Android devices for a new experience and new pleasant impressions. Explore new locations, structures, blocks, and fight new mobs.