Demon Slayer: official gameplay of Inosuke and Zenitsu, it’s all over the place 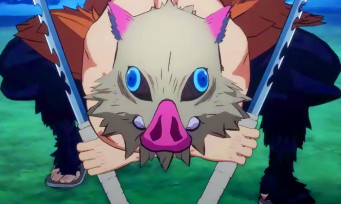 Decidedly, for ten days and the famous Japanese region locked livestream organized by CyberConnect2 and the Japanese dubbing actors, Demon Slayer is only talking about him. Better known as Kimetsu no Yaiba: Hinokami Keppuutan in the Land of the Rising Sun, the new fighting game from the developers of the Naruto Ninja Storm saga keeps revealing the identity of the characters who will be at the launch roster. After Tanjiro and Nezuko a few days ago, it’s now Hashibira Inosuke and Agatsuma Zenitsu’s turn to show us a little the extent of their talent and the different special moves that we are used to seeing in anime and find themselves teleported into this incredibly furious game. If Zenitsu is above all a womanizer, and he is a little timid around the edges, let’s not forget that he is a demon slayer just like Tanjiro. As for Hashibira Inosuke and his boar’s head, he never shows up without his boar mask, a symbol of strength, which he wears for some unknown reason. He adopts an offensive technique with two blades and names one of his attacks “charge of the boar”. Until the promotion also starts in France, know that this Demon Slayer is expected on PC, PS5, PS4, Xbox Series X | S and Xbox One.