AllStars Destruction test: explosion and fun, but a PS5 exclusive that lacks depth

8 Feb at 17:44
Games
No Comments
7
The test
After Hitman 3, the first big release of the beginning of the year 2021, Destruction AllStars is presented as the second wave, supposed to take us with force to our PlayStation 5 (provided we have one eh) since the latter is no other that exclusive to the next-gen Sony console and, just to attract customers, is free with the Playstation Plus. Claimed multiplayer, Destruction AllStars is as competitive as it is funny and spectacular. So many arguments to go and download it illico presto? Yes ? No ? Go in the saddle, we are going for the verdict.

The strength of a title is undoubtedly being able to articulate itself well around its strong point or its main particularity. In the case of Destruction AllStars, the case is simple: while the genre “Big drums that smash everything” dear to Twisted Metal, Destruction Derby, or Burnout, consoles are sorely lacking (or are struggling to renew themselves) here is this product designed and developed by Sony Interactive Entertainment or rather (precisely) by the studio Lucid Games. With a breath of fresh air all his own and carried by his gameplay: the races in Destruction All-Stars will take place in closed circuits, with cars led by pilots, the famous All-Stars, that we will direct ourselves – even during the game. And yes. In this game, the car is not the end, even though it occupies an important place. The goal is simple depending on the mode: hit the opposing cars and destroy them, while collecting crystals scattered here and there, in order to raise the power bars (renamed Breakers) of your All-Star: one for its pedestrian version , the other for its legendary crate, which must be summoned and itself endowed with a super capacity. The promise is rich and in part, pad in hand, the promise is kept. The pace is sustained, the game is fluid, the capacities offered by the two gameplays – pedestrian and motorized – are enjoyable: you can jump almost anywhere, hang on to ramps and platforms, a compulsory exercise to take possession of ‘a car – run over walls, jump and dodge other participants when on foot. 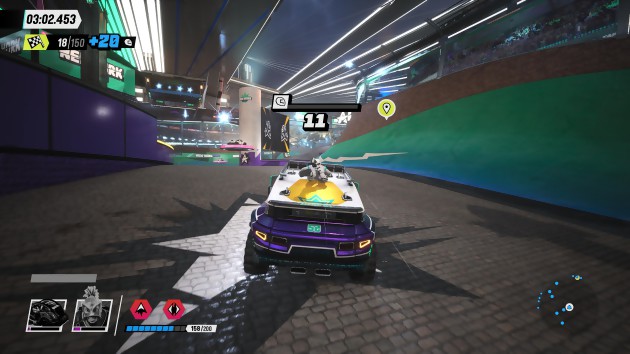 The experience could have ended there if the developers had not added a fairly fun feature: that of being able to steal a competitor’s body by jumping on its hood, all via a series of QTE and on condition of not not to be too shaken by his host, the only option for the latter to be able to quickly get out of there well. In the car, skidding is a religion as the circuits and the racing situations lend themselves to it, jumping high and far is a possible option and obviously, rushing on the opponent, via a speed boost both lateral and frontal, is highly advised to achieve your ends. In short, we’re having fun. And if the tutorial is rather well done, we can not say the same for the training menu, quite sparse, especially with regard to some moves that are still interesting to master, or if only concerning the mastery of the All-Stars proposed. Their list is exhaustive, their capacity as well and their morphology as well, and what more is adapted to their style of aptitudes, itself modeled on the type of crate of legend driven. In other words: a muscular and a little strong All-Star will tend to drive a car with reinforced armor and a very beefy look, where a more fleeting All-Star will drive a car built for speed. To each his own style.

Thought of multiplayer, Destruction AllStars revolves around four modes: two solo (Mayhem, Gridfall) and two others for the community (Carnado and Stockpile), playable up to 16 players, divided into two teams of 8. If the principle is nice (destroy the most boxes for his team to collect the most spare parts for his team), the modes in question are too quickly repetitive, therefore tiresome. Not the fault of the experience offered but the lack of highlighting your exploits in the collective and the level of reward collected at the end, even if we note, context now requires, the presence of a Battle Royale (Gridfall) in the lot. Of course, we have the right to slow motion and slow-motion effects when literally destroying another crate, but the developers, given the stakes of the damage done during the game, could have focused even more on the impacts, making them still “mainstream” than they ultimately are. A little disappointed therefore but not really downhearted either, let’s not exaggerate, especially since despite the caveats mentioned a little higher, the Stockpile mode still stands out well above the fray.

Beyond the graphic finesse of the title, which is undeniable and the fluidity of the whole, it is the gameplay that takes over to offer us a seductive experience, obviously carried by the Dual Sense, with the haptic feedback and adaptive triggers.

It’s hard to be choosy when you start Destruction AllStars, at least at first. Namely the first hours. The reason ? Beyond the graphic finesse of the title, which is undeniable and the fluidity of the whole (ah life without loading time), it is the gameplay that takes over to offer us an attractive experience, obviously carried by Dual Sense, with haptic feedback (the sound of impacts and travel coming directly from the controller) and adaptive triggers, which harden or not depending on the situation. Clear ? The more expensive your racing car, the more difficult it is to maneuver. An impact, a punctured wheel and survival will quickly be a feat. Aren’t we on an arcade game yet? Yes, but to add a little spice, the developers saw fit to adapt the damage to driving on the track. Good idea, good rendering. 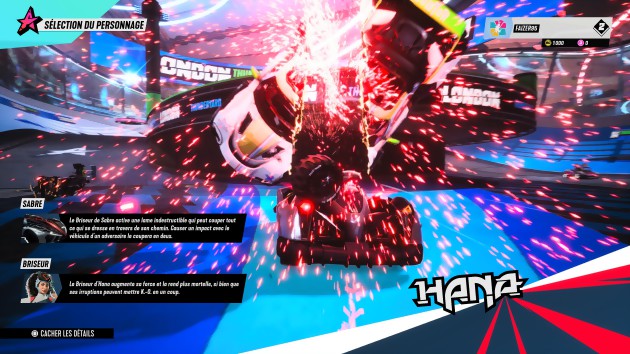 What is less is the content, therefore, a little light. In part. Because in addition to an arcade mode which almost acts as a real training in competitive online jousting, Destruction All-Stars has a single player mode called Challenge Series, in which we witness the clash between two AllStars. With a little intro, coughed. So with a beginning of lore, but just a beginning because the latter is not really developed or exploited. Pity. But that’s not the most disturbing. What is is the accessibility to this mode. If the first story has the merit of showing us the replayability of the whole (each challenge is governed by three objectives, getting one unlocks the next challenge), it also shows us what motivated Lucid Games behind this mode. Once Ultimo Barricado’s story is over, you’ll have to… pay to move on. What? Yes, you read that correctly, you have to pay in Destruction AllStars to go to the end of the solo. And we’re not talking about virtual currency, which is only used to buy skins or emotes for the 16 All-Stars or the twenty vehicles available (28 in classic mode, 16 Legend boxes). Going to checkout sounds like an aberration when you know that this exclusive title is only intended for a limited time on the Playstation Plus for free. We will have to see how Lucid Games and Sony will justify the same process when Destruction AllStars will pay off, which should have been the case, since the game was scheduled for the launch of the PS5. 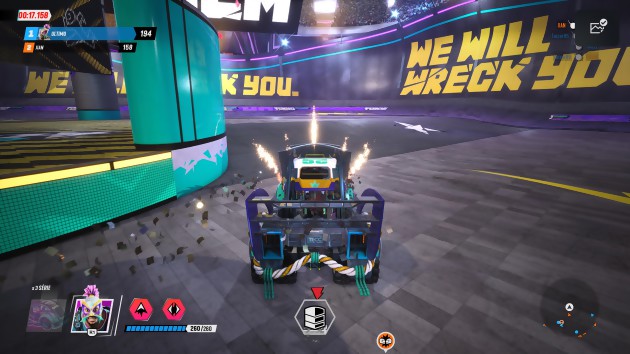 Shameful, then. Just like the lack of efforts of the teams to offer us a more diverse landscape. Barcelona, ​​London, Las Vegas: the cities are different, some outdoor settings in the distance too, some arena layouts as well (still happy) but above all we have the impression of always evolving in the same place. Since Destruction AllStars has small sides that remind us of Rocket League, it’s difficult to sue Lucid Games on this point. But it was still important to stress it. On arrival, it is undeniable that we have a great time on Destruction AllStars. But the problem is knowing how long we will go back there, as much for lack of interest in the long term (moreover, at the time of this test, it was not easy to find an online part on the modes in 8vs8), that on the fact the solo is also tricky. We imagine that Lucid will improve its copy in terms of content, by opening the challenges of single-player mode (such as passenger transport, or the time trial) to multiplayer mode and by offering a more robust lore. At least we hope so. Otherwise, it will be difficult, despite its great potential, for Destruction AllStars to pass the second.