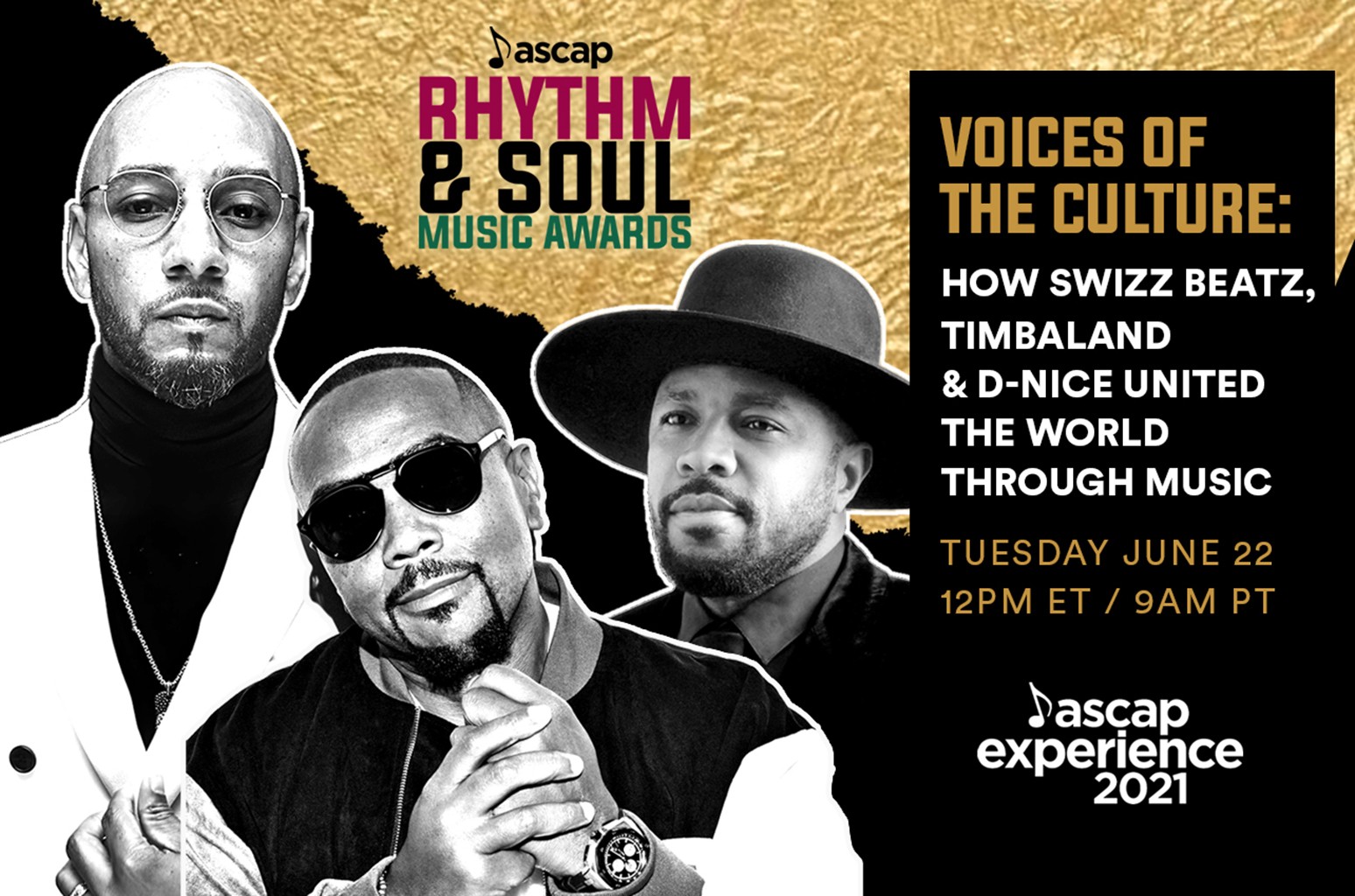 Songwriter-producers Swizz Beatz, Timbaland and D-Nice will receive the ASCAP voice of the culture award to kick off the 2021 ASCAP Rhythm & Soul Music Awards on June 22. Following the presentation, the music creators will take part in a 2021 ASCAP Experience conversation, “Voices of the Culture: How Swizz Beatz, Timbaland & D-Nice United the World Through Music,” at 12:00 p.m. ET/ 9:00 a.m. PT.

The virtual conversation will explore how Timbaland and Swizz Beatz’s virtual music battle series Verzuz and D-Nice’s Club Quarantine became tools for uplift within the Black music community and touchstones of empowerment during the pandemic. To join the conversation, participants can RSVP at www.ascapexperience.com/schedule. They can also submit a question for the three creators before June 10.

Verzuz has featured such epic matchups as Gladys Knight vs. Patti LaBelle, Erykah Badu vs. Jill Scott, Earth, Wind & Fire vs. The Isley Brothers, and Snoop Dogg vs. DMX. Club Quarantine attracted a virtual community of millions to Instagram Live for sets of funk, disco, hip-hop and R&B.

In addition to launching these popular events, Swizz Beatz, Timbaland and D-Nice are accomplished music creators in their own right.

Grammy-winning songwriter-producer Swizz Beatz has been in the music and business worlds since he was 16. He began DJing and working at his uncle’s company, Ruff Ryders Entertainment, while still in high school. Within a short time, Swizz produced the company’s first hit, by DMX. More success followed as a producer and artist. As a producer, Swizz has worked with a diverse array of artists, including Jay-Z, Madonna, Kanye West, Lil Wayne and Metallica.

Derrick “D-Nice” Jones has achieved success as a DJ, rapper, beatboxer, producer, photographer and philanthropist. The BET Awards named him an honorary recipient of the Shine a Light Award, and he took home the 2020 Webby artist of the year award in the special achievement category. D-Nice is set to deliver a full-length album in 2021.

The 2021 ASCAP Rhythm & Soul Music Awards is a virtual celebration that takes place on social media from June 22-24. The event recognizes songwriters, composers and publishers behind the most performed R&B/hip-hop, rap and gospel songs of the past year. Friends and fans can join the online festivities as ASCAP shares photos, videos, acceptance speeches and more from some of its top songwriters and publishers, posted with the hashtag #ASCAPAwards to @ASCAPUrban on Instagram and @ASCAP on Twitter and Instagram.

The ASCAP Experience takes place twice a month on Wednesdays through the end of 2021. Songwriters, composers and music business professionals can join the ASCAP Experience community for access to conversations with songwriters and producers from across the musical spectrum, plus panels with top industry executives, song feedback, networking opportunities and more. The virtual sessions are free to attend and take place on a variety of platforms, including YouTube, Instagram and on the ASCAP Experience website.