Streets of Rage 4: the game is a hit with 2.5 million sales, an upcoming DLC ​​as a freebie 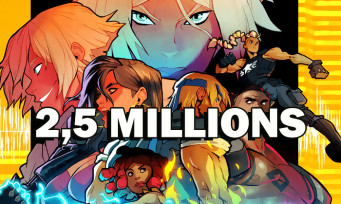 Released on April 30, 2020, Streets of Rage 4 is a worldwide hit that few people had imagined, not even at DotEmu who did not think they would reach such a huge popularity threshold. It’s been official for a few minutes, the 2D beat’em all jointly developed between DotEmu, LizardCube and Guard Crush Games has sold 2.5 million copies worldwide. This is the perfect opportunity to announce the arrival of the first paid DLC, which responds to the name of Mr X Nightmare. If the price has not yet been revealed, we know, however, that it will add 3 new playable characters, but also the “Survival” mode, which will arrive a little later in the year.

Among the 3 new characters expected, only Estel Aguirre is currently announced, it will be necessary to wait several weeks, even months, to know the identity of the other two. As for those who do not know Estel Aguirre, know that it is initially a boss that could be compared to an Abby (from The Last of Us 2) for the muscular physique and his ferocity in his attacks. But that’s not all, the “Mr. X Nightmare” DLC will also include new musical tracks composed by Tee Lopes, who composed and arranged the music for Sonic Mania, League of Legends and Monster Boy and the Cursed Kingdom, between other.

Finally, know that a free update will allow you to benefit from a new difficulty mode: Mania +, but also the introduction of a training system to refine your combos and implement the most elaborate strategies. We take this opportunity to remind you that Cyrille Imbert, the big boss of DotEmu, was our guest in our show 5 News & Rumors per day on Tuesday April 6, 2021.