Razer continues to renew its products, and today we are entitled to a new helmet. With no less than 15 references in its range of helmets gaming, the snake brand hopes that each player can find a system to their liking, whether it is based on performance with the Blackshark typed eSport, the Kraken with cat ears and RGB galore, the Nari wireless, or the Opus which is intended for professionals with its look good more sober. But you also have to know how to speak to the portfolio of your customers, and this is where the famous X versions of these many helmets come in. The objective is to lower the price by ignoring certain dispensable features, or simply to offer simplified products. Today we have you therefore give our opinion on the Kraken V3 X, the brand new version of the brand’s bestseller, in its most affordable version.

When unpacking, we immediately notice that savings have been carried out on several levels. The Kraken V3 X is simply packaged in its cardboard box, and has no transport box, or even a pouch. The construction is 100% plastic, and while the result is not necessarily flattering to the touch, it is perfectly delusional to the eye. All the parts are perfectly adjusted, and the helmet gives an impression of flawless solidity. It may be deformed in our hands, the object never seems ready to break unexpectedly, and offers a flexibility that will adapt to all heads. Moreover, plastic is rather solid, because after several days of walking our helmet at the bottom of a backpack with our key and other objects (a laptop transformer, USB cables, etc), the latter remained free of any scratches. Totally black, the device is downright sober, especially when you know the productions of Razer and the reputation of the brand for styles rather flashy. 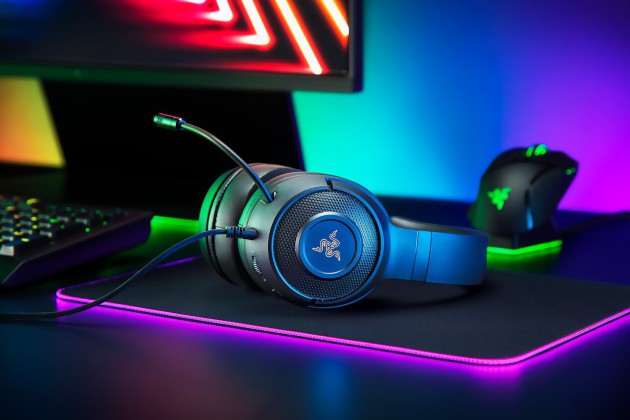 The hoop is relatively thin, and this Kraken adopts a much less massive appearance than the other references in the range. Another surprise: the microphone boom is here irremovable. Impossible to remove it, nor to store it in the headset as is the case on classic Kraken. That said, the latter is particularly flexible, and an ideal length to fall in front of the mouth. Finally, last point of economy: the cable. While Razer has accustomed us to very high quality sheaths, in various materials that oscillate between nylon and fabric, the Kraken V3 X is satisfied with a simple reinforced rubber, which is far from noble. We will console ourselves with the available length of 180cm, a size which is more than sufficient whatever the intended use.

Connectivity level, we will also have to be content with a simple plug USB-A which however has the advantage of being able to make the headset compatible on PC, Macintosh and PS4. As a stereo base, the Kraken can virtualize from 7.1, but only on Windows, and after purchasing a suitable app (THX Spatial Audio) sold at a price of 25 €. Be aware, however, that the brand with the snake makes a small gesture, and includes a discount coupon (with a code) 50% off the price of this utility. That said, we advise you to stay in stereo, the virtual spatialization on headphones being generally quite disappointing. Still, the helmet isn’t as spartan as you might think. Each headset thus has a backlit RGB Chroma logo that can be configured via the software. Razer Synapse. 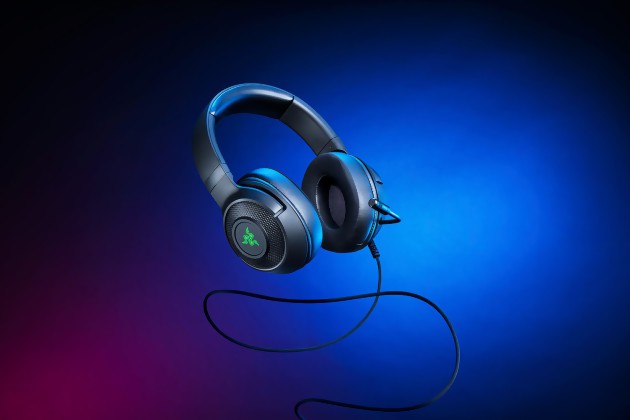 Moreover, once on the head, we realize that the helmet is rather comfortable thanks to its thick memory foam pads, its well padded headband, and its featherweight of 285g which allows him to be quickly forgotten. With its speakers of 40mm, we has a very honest sound (we stay away from equipment for audiophiles, eh) which adopts a rather neutral signature, where others tend to offer disproportionate bass. The microphone is also a nice surprise, with a clear sound and devoid of most interference due to its directional design, while the length of its boom allows it to be well in front of the mouth. As for the controls, they are grouped together on the left ear cup, and are limited to a volume control wheel, and a mute button to mute the microphone.

THE BEST VALUE FOR MONEY ?

You got it, the Kraken V3 X is not a thunderbolt, but overall it is a helmet that does a good job, and which should seduce a lot of people thanks to its hyper aggressive price of € 80. Be aware that in terms of competition, its closest rival turns out to be within the bloated range Razer, since it is neither more nor less than BlackShark V2 X which displays a similar data sheet. In fact, by opting for the reference eSport, we will exchange the RGB chroma lighting for a slightly more flattering finish, a more industrial look (less sober too), and a slightly more advanced sound insulation. 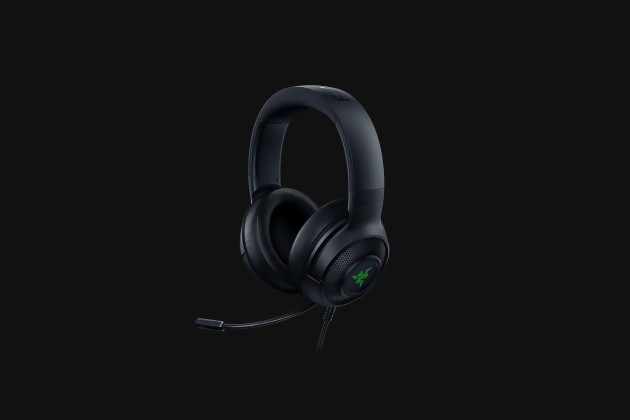