6 May at 21:56
Grand Theft Auto V
No Comments
74
Our readers believe that the city in Gta 6 will either become a completely new metropolis, or expected by many Vice City – more than half of the respondents voted for these two options. Further, there is a combination of several cities. Fans still hope for a large-scale map like the one in GTA: San Andreas, although practice shows that we may not return to the standards of 17 years ago. The least popular were the return options to Liberty City and San Fierro and Las Venturas. 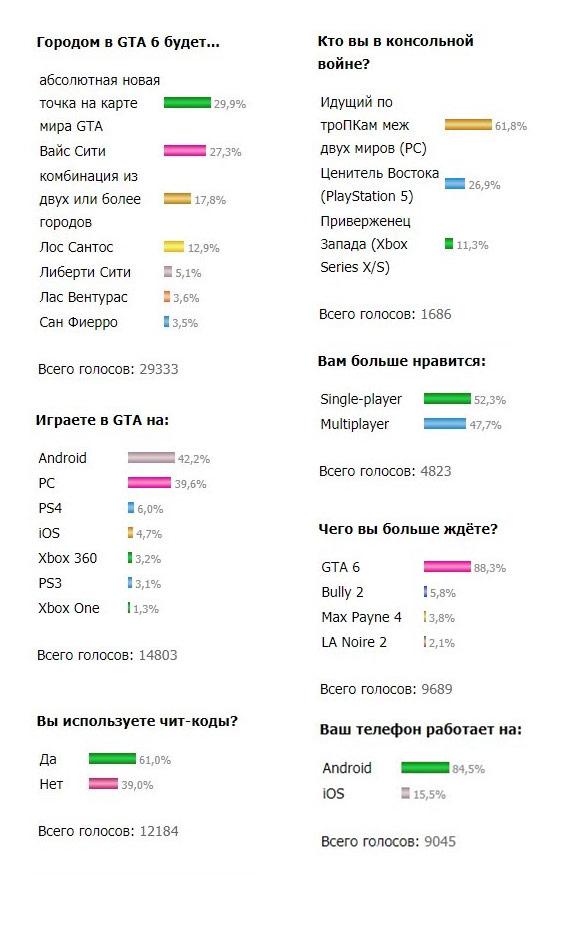 The 6 itself is more expected by players than any other title from Rockstar Games – not a sequel Bullynor continuation La noirenor fourth Max payne and are not nearly so in demand.

In a poll on the topic console wars most expectedly sided with PC gaming. If we take only consoles, then we have more “soniboys” than “box-type” ones.

However, many more people preferred to play GTA not on computers, but on Android-based mobile devices. The advantage is not great, but this fact is interesting in itself. Other platforms lagged far behind, not gaining even 20 percent of the total respondents. Well, it is logical that there are much fewer iOS users on the site compared to the eternal competitor.

As for other polls, single player turned out to be slightly more popular than multiplayer, and cheats are used more often than not. By the way, here you will find a huge selection codes for any GTA on all kinds of platforms…

Right now you can take part in new polls. Look for the corresponding block on the pages of our site.