All the 2021 VMAs Performances Ranked 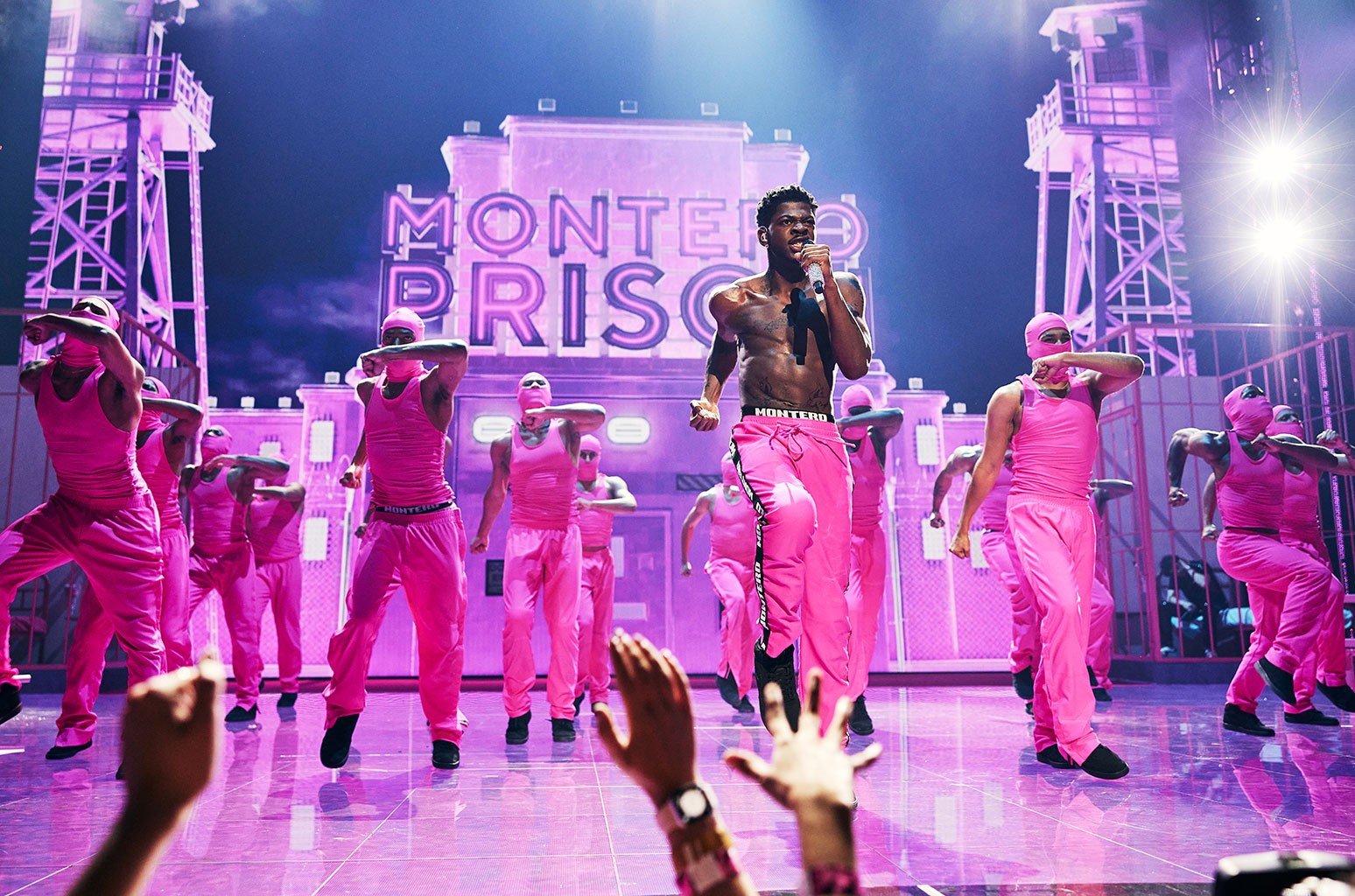 Sunday’s (Sept. 12) telecast of the 2021 MTV Video Music Awards celebrated the channel’s 40th birthday by bringing out the hottest young talent and veteran performers on one stage at the Barclays Center in Brooklyn.

Hot pink was the unofficial color scheme of the evening’s performances, from Chlöe’s booty-popping outfit during the debut television performance of her first solo single “Have Mercy” to Lil Nas X and his backup dancers’ bedazzled boxers as the rapper brought “Industry Baby” to the stage to Camila Cabello’s feather-ruffling display of her latest single “Don’t Go Yet.”

Saint JHN and Latto also gave mini performances of “Sucks to Be You / Trap” and “Big Energy / Muwop / Bitch From Da Souf,” respectively, on the Extended Play Stage presented by Coors Light, which we don’t include in our overall ranking.

The “Summer of Love” isn’t over, as Shawn Mendes and Tainy reminded their fans during the television debut performance of their latest collab. After Mendes’ girlfriend Cabello sweetly introduced him as “my guy,” the pop superstar crooned to every other girl in the audience. The performance didn’t quite melt any hearts and only got them beating from Tainy’s bouncy production.

The duo’s ukulele-led performance of “Saturday” Trojan-horsed the audience into thinking Tyler Joseph and Josh Dun were going to deliver a snooze fest. But sparklers and strobe lights woke everyone up in the Barclay’s Center and got them loud like it was a Friday.

Introduced by their girlfriends Megan Fox and Kourtney Kardashian, who called them their “future baby daddies,” MGK and Barker’s debut performance of their single “papercuts” cut deep… into the rapper’s face, which painted a clear picture of what being Born With Horns, the title of MGK’s upcoming sixth studio album, looks like. From bursts of fire erupting from the stage, and backup dancers with blood-red flower petals budding out of their face, their performance brought the VMAs to a screeching, guitar-smashing halt.

Sheeran took Brooklyn Bridge Park by storm, where masked fans surrounded the outdoor stage experienced “Shivers” up close and personal. Its alternate location outside of the Barclays Center made the English pop star’s performance disjointed from the rest of the awards show. But his ability to hold his own can’t be discredited, as Sheeran’s mini concert injected lightning bolts of energy into the crowd.

Keys’ television debut performance of her and Swae Lee’s brand-new collab “LALA” honored her New York home state and the VMA’s home base. But the gold-gilded duo wasn’t the quite the golden performance of the night; however, her solo piano performance got everyone got in the right “Empire State of Mind” toward the end, as a shot of the Empire State Building brought Keys back home, back behind a piano and back to 2009 with her Hot 100 No. 1 Jay-Z collab.

The shimmering Latin hitmaker embodied joy in the form of his branded Care Bears during his performance of “La Funka.” While a massive teddy bear ascended from the toy-filled claw machine behind him and floated across the ceiling of the Barclays Center, Ozuna left a smile on everyone’s faces — and changed the face of MTV’s gigantic Moon Person to a teddy bear to further exercise his dominance.

These moon men (not to be confused with the actual VMA hardware) descended upon the stage and landed on top of a mountain, as LAROI and Bieber, the latter of whom was back after a six-year hiatus from performing at the VMAs, claimed their rightful position at the top while performing their Hot 100-topping hit “Stay”. The electrifying performance, met with a chorus of screaming girls, was the right way to start the night. But the hoodie-and-overalls-clad Biebs had sort of a rough-as-the-mountain-he-descended-upon transition into his emotive Justice highlight “Ghost.”

Cabello’s black-and-white performance of her latest single “Don’t Go Yet” was hot off the presses with her legion of dancers — and when her performance colorized, we saw that it was hot pink off the presses. The knockout dance break paid tribute to her Latin roots and maintained her princess status after she recently premiered her adaptation of Cinderella.

Musgraves set the dreamiest scene for her first-ever VMA performance of the title track of her fifth album star-crossed. The sultry, candlelit display had neon signs of daggers piercing hearts scattered across the stage while a heart-shaped ring of fire further illuminated the star. As Musgraves’ new album dissects life following her divorce from Ruston Kelly, the country singer reminded everyone that there is still light at the end of the tunnel, and she’s the source of it.

The evening’s host took everyone to Planet Her, which revolved around the floating red-hot star as she bellowed the album’s deep cut “Been Like This” within a ring of light. Once she finally came back down to the Barclay’s Center stage on Planet Earth, Doja took on a twinkling version of “You Right” sans her collaborator The Weeknd, defying the song’s lyrics about wanting a man and proving VMAs viewers only needed her for the out-of-this-world performance.

Rodrigo also kicked off the VMAs with her virtual butterfly- and balloon-assisted descent into her punk-powered “Good 4 U” performance. While wearing a sweet purple corset dress and having the song’s f-words brutally bleeped out of the show, the 18-year-old hitmaker, who won song of the year for “Drivers License” shortly after her performance, reminded MTV on its 40th birthday how to properly cater to their target audience of angsty teenage music lovers.

Swizz Beatz let the kids know Busta would show them how it’s done when introducing the hip-hop legend, and the Brooklyn MC did just that in his hometown that he proudly repped. After recreating the eye-popping “Put Your Hands Where My Eyes Could See” music video, Busta (with none other than Spliff Starr hyping him up by his side) spit his scene-stealing guest verses on M.O.P.’s “Ante Up,” A Tribe Called Quest’s “Scenario” as well as his signature rapid-fire section of Chris Brown’s “Look At Me Now,” taking the crowd’s breath (and his own) away. While telling Brooklyn, “Don’t ever forget that,” the 49-year-old rapper also reminded the kids he’s the go-to rhyme-spitter who’s also been delivering, as Swizz said earlier, “the dopest videos of all time” and would have been worthy of the video vanguard award (had it not been removed from the show for a second year in a row).

The first-ever recipients of the Global Icon Award returned to the VMAs stage for the first time in 15 years and gave the night some much-needed rock n’ roll edge with their ’90s hits “Learn to Fly” and “Everlong” as well as “Shame Shame” from their 2021 album, Medicine at Midnight. While the screen behind them took the crowd back in time through the Rock and Roll Hall of Fame inductees’ decades-long career, the Foos lived it out right there on the stage and shone a posthumous spotlight on late Rolling Stones drummer Charlie Watts with “Charlie R.I.P” written on Taylor Hawkins’ drum kit.

Normani’s show-stopping performance of “Motivation” at the 2019 VMAs called for her grand return this year, and the pop star certainly did not disappoint while showcasing her “Wild Side.” The silver star swept the stage (literally!) and bodied her futuristic rock-infused performance. While fans followed her across multiple screens in the beginning, all eyes remained on her as she traced Teyana Taylor’s strapped body with her own in a show-stopping tribute to Janet Jackson’s performances.

Fresh off the hot pink heels of releasing her first solo single “Have Mercy,” Chlöe brought its bootylicious visual to life. The 23-year-old singer took the stage by storm while her male backup dancers quickly fell under her spell and crumbled to the ground. The one-half of Chloe x Halle made her mark on the VMAs stage, which absorbed her tectonic plate-shifting choreo, and emblazoned her name on the screen.

After an illustrious introduction from Billy Porter, Lil Nas X and his marching band got into formation for the champion’s theme “Industry Baby,” assisted by Jack Harlow. After someone quickly ripped off his shirt — it wouldn’t be a proper LNX performance if he was fully dressed, right? — the rapper lined up the hot pink inmates of “Montero Prison” and eventually stripped them down in bedazzled briefs to perform the outro of “Montero (Call Me By Your Name).” Even though the 22-year-old hitmaker already has a “couple number ones,” Lil Nas X continues pushing the envelope on how to deliver them at awards shows. It came as no surprise that his name was on the envelope as the video of the year award winner.