Street Fighter 6: we played it for 2 hours non-stop, and we got a kick out of it!

” – And now, are you ready for the harsh world of Street Fighter II? Do you want to be Ryu, or Honda, or Blanka, or Guile, or Dhalsim, or Zangief, or Chun-Li, or Ken?
– I choose Ryu, the great master of karate. »
This mythical passage of the VHS dedicated to the promotion of the Super Nintendo in France, the old of the old watched it a million times before being able to put their hands on the fighting game from Capcom, and it is precisely this excitement that we felt when discovering the first images of Street Fighter 6 during the last State of Play. After the chaotic launch of Street Fighter 5, the Osaka house had to take care of the entry into the scene of its successor, which probably explains why the game will not arrive before 2023. Fortunately, we had the opportunity to spend two hours in the company of Street Fighter 6 in Capcom’s Saint-Germain premises. Might as well tell you right away: we didn’t come for nothing. 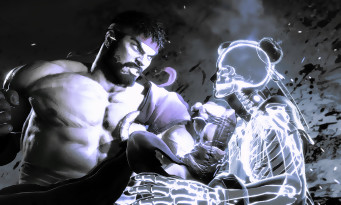 Although the full Street Fighter 6 roster leaked online, the version we were able to try contained only four characters: Ryu, Chun-Li, Luke, and Jamie. A number more than enough to measure the impact of the Drive system, the big novelty of this opus. Unlike previous Street Fighters where you had to wait to have enough juice before trying anything, the Drive gauge is full from the start. And that changes everything, since now it’s about managing this bar which, in addition, returns to its initial level between each round. Fans of The King of Fighters, who often criticize Capcom’s series for its lack of boldness and punch, can very well adopt an aggressive strategy if they wish, knowing that once empty, the Drive gauge puts a few seconds to fill. During this time, our character displays a kind of grayish complexion, moves more slowly, is out of breath, and therefore vulnerable. Fortunately, the Drive bar does not only decrease: it regenerates over the round, and each attack that hits the mark also restores it. With this Drive system, Capcom has taken over the main mechanics that worked in previous Street Fighters. 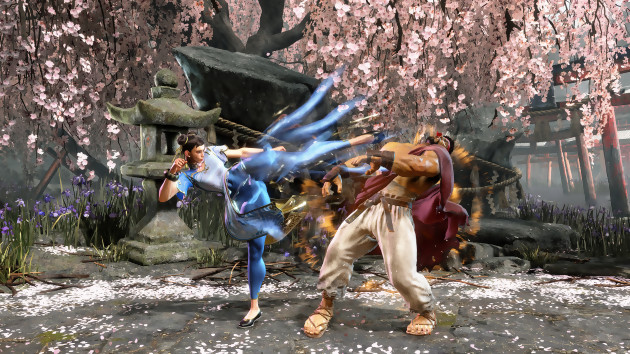 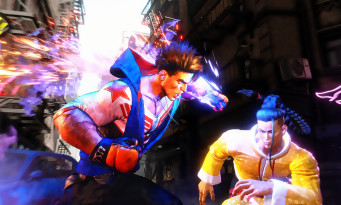 For example, Drive Impact (which costs one segment) is very similar to Street Fighter IV’s Focus Attack. In concrete terms, the character can take a hit without his attack being interrupted. It is even more effective when executed near a corner since the opponent then finds himself propelled against the wall, even if he is in a guard position; and behind, we can pick it up with a very dirty combo. In terms of balance, the Drive Impact seems cracked, but there is no doubt that Capcom has planned the coup with subtleties that still elude us. Besides, one of the solutions could be the Drive Parry which clearly refers to Street Fighter 3, with a notable simplification. Indeed, we found that Street Fighter 6 did not differentiate between a high counter and a low counter. It is enough just to press medium foot + medium fist for our fighter to parry the opposing blow, which still screws up the mind game. Moreover, it is possible to maintain the two keys, which will decrease the Drive gauge as long as an attack is not countered. That said, all does not seem lost for purists, since Capcom has thought of integrating the Perfect Parry with more demanding timing. Perfectly executed, it exposes the player opposite to a punishment whose damage you can guess. Then there is the Overdrive (which costs two segments) which we could compare to the famous EX attacks that we no longer present.

By opting for the RE Engine, Capcom shows that the internally designed engine is able to adapt to its favorite fighting game. If the artistic direction surprised more than one during the reveal, we can only salute the developers for having moved away from this cartoon aspect which the franchise had a hard time getting rid of since Street Fighter IV.

As for the Drive Rush – which is reminiscent of the Focus Attack Dash Cancel from Street Fighter IV – it allows you to dash towards the opponent after a successful Drive Parry (one segment) or an attack that can be canceled (three segments). If it is valuable for maintaining the pressure – in particular by achieving a combo that we could not place with the usual recovery – it can also serve our defensive game. Finally, the Drive Reversal (which costs two segments) echoes the V-Reversal of Street Fighter 5. Here, the goal is to reverse the balance of power by placing a counter and putting the opposite player in our turn in the washing machine. With all these elements in mind, we quickly realize that the Drive system is a central part of Street Fighter 6, to the point of undergoing chip damage instead of the life bar. At the bottom of the screen, we find the Super gauge which continues to fill up over the rounds and can contain up to three levels. Of course, it is also through it that the Critical Arts pass, which we keep on hand until the right moment. Aware that today, it is also necessary to address the general public, Capcom has included so-called “modern” controls, because if making quarter circles has become natural among informed players, it remains a complicated exercise for the laymen. 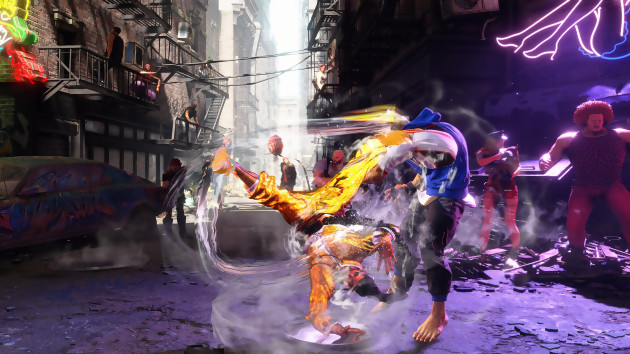 “PLAYER TWO WAS AN ABSOLUTE BEAST IN THAT MATCH!” 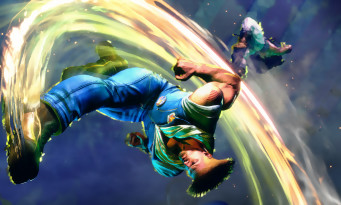 As they have already been able to do in the past (Capcom vs. SNK 2 EO, Tatsunoko vs. Capcom: Ultimate All-Stars among others), the developers have therefore simplified the controls so that it is possible to release a Hadoken by pressing only one key. And if one presses at the same time on one of the sides of the directional pad, there is a way to place other special attacks, including Super Arts. That’s not all, since Street Fighter 6 also benefits from a system of assisted combos which consists of pressing R2 by hammering either Square, Cross or Circle. A kind of shortcut allowing the less resourceful to familiarize themselves gently with the principles of fighting. This mode will never replace the hours of training imposed by the genre – especially since all the controls are not accessible – but on the other hand, not everyone necessarily aims to participate in sports competitions. On this subject, we were curious to see what gave the live comments made with real animators, in this case Jeremy ‘Vicious’ Lopez (English) and Aru (Japanese). The result is rather clean even if it is difficult to reproduce this immediacy which makes the charm of the tournaments. It is unknown if Capcom intends to add other guests in the future, but it would still be a shame not to offer a localization for each territory (including France), if only to reinforce the immersion and really support the players. As it stands, we don’t really see the point of highlighting this feature to a community whose mother tongue is not English and Japanese, and who will not have time to read the subtitles. Shame. 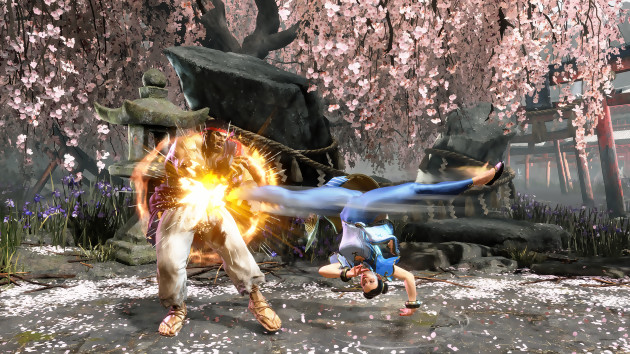 Ingenious, the Drive system pushes the player to think; you can even consider it as an incentive to die with your ideas and apply a different tactic the next round, since the gauge will return to its initial level no matter what. 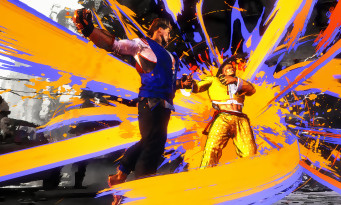 This is the only black point that we have noted during this first contact with Street Fighter 6, because for the rest, it is brilliant at all levels. The game manages to perfectly transcribe the difference in build between the fighters, whether it’s Chun-Li’s agility, Luke’s brutality, Ryu’s massive physique or Jamie’s dexterity. Since the latter is a new character, we took the time to study him a little, knowing that he masters both breakdance and the technique of the drunk man; hence the difficulty in reading his attacks, at least for now. Note that he has four levels of drunkenness, which changes the properties of some of his attacks and expands his command list. If Jamie can be exhilarating – that’s good – by the variety of his blows, we also found that he was easily punished when we let ourselves be carried away by his ardor. On Luke’s side, nothing really new to announce since Street Fighter 5 a priori, while for Ryu (but Capcom had already announced it), we note the appearance of Hashogeki and Denjin Charge (which replaces his Denjin Renki of Street Fighter 5). Finally, Maxime was able to take a look at Chun-Li’s new Serenity Stream. Basically, it’s a low stance that allows him both to be safe against projectiles, but also to benefit from new attacks. 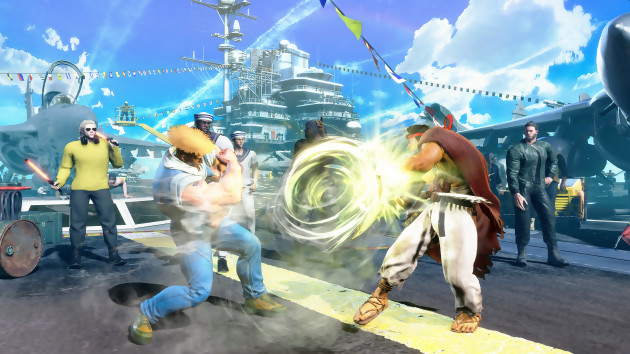 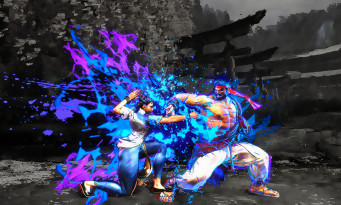 By opting for the RE Engine, Capcom shows that the internally designed engine is able to adapt to its favorite fighting game. If the artistic direction surprised more than one during the reveal, we can only salute the developers for having moved away from this cartoon aspect which the franchise had a hard time getting rid of since Street Fighter IV. This time, we are dealing with characters with a more realistic appearance, more elaborate facial expressions, and animations of impeccable fluidity. Street Fighter 6 is a real ode to urban culture, with in particular this sequence where the two protagonists face each other before entering the arena, or the tags that repaint the screen when you execute a Drive Impact or an Overdrive among others. Despite the multiple visual effects that accompany each move, we are never in too much, everything is calibrated with intelligence, whether we are in Metro City Downtown or Genbu Temple – the only two levels available in the demo. In short, great art.