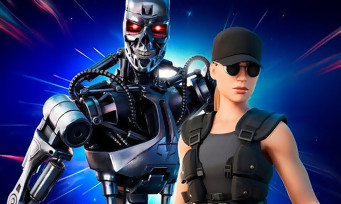 The announcements are linked on the side of Fortnite which obviously does not have the time, and does not even let its community breathe. After revealing to us the arrival of football in the game, then the next day unveiled a Predator skin that seems to delight players for a few hours, we learn that another tenor of “monster” cinema will land in the title from Epic Games. It is neither more nor less than the Terminator T-800, the very one that was played by Arnold Schwarzenegger. But the latter will not be alone, since he will be accompanied by Sarah Connor. For the moment, we do not know the bonuses that will be offered with the two characters, but there is at least one rather funny trailer that allows us to see them land in the world of Fortnite thanks to Point-Zero.