The was released about two weeks ago and ever since then, we have been swamped with monitoring an incredible amount of feedback. Our developers are still working hard to keep track of everything on multiple platforms and we figured we might send some love back to the #BestCommunityEver by showcasing several experiences with the latest map expansion in different forms. 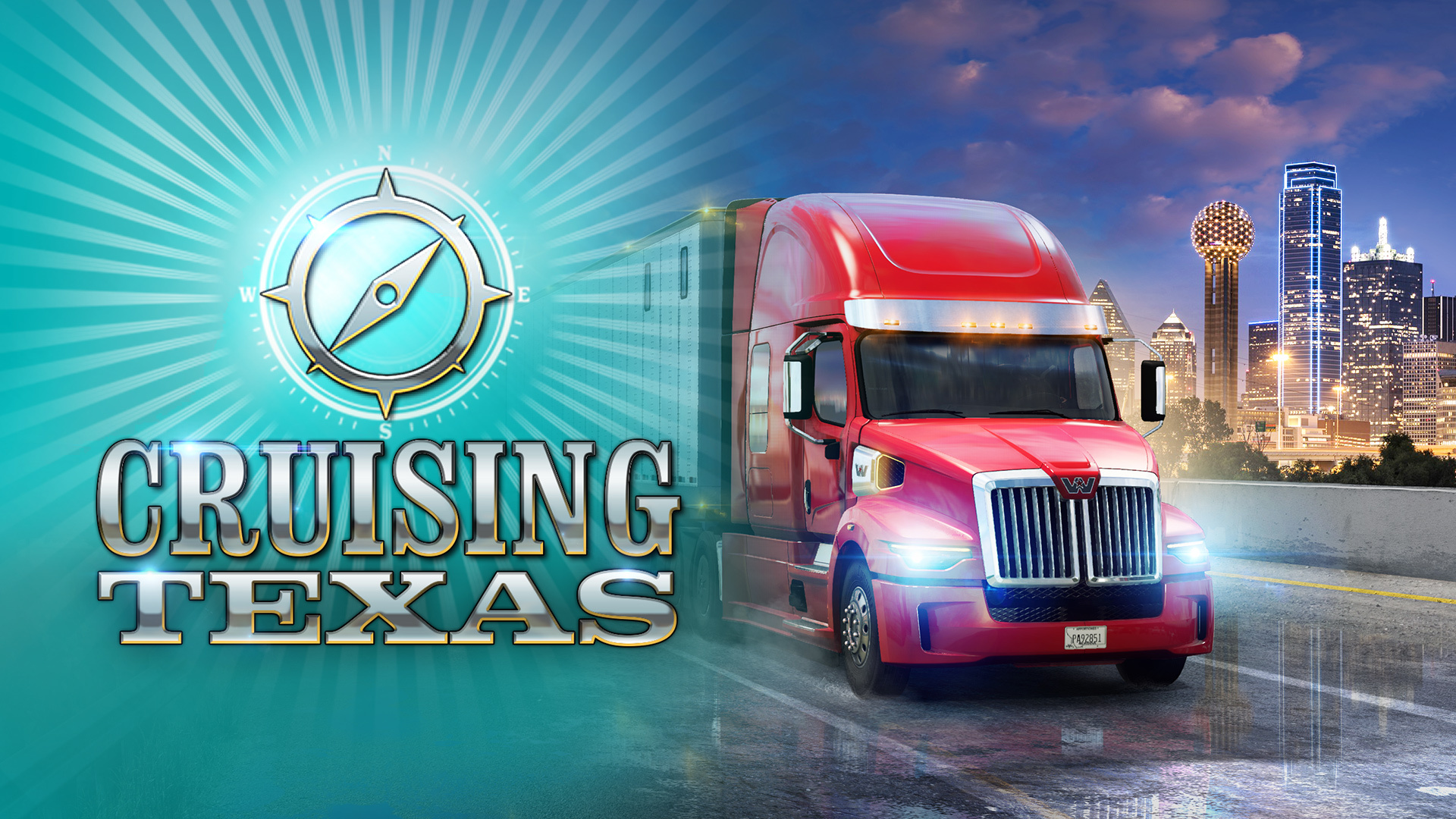 Let’s start off with screenshots and videos, which filled our social media to the brim. We love reading about your journeys across this massive state and, as always, we’re making sure to share the most amazing posts with everyone in the company in our internal channels. We strongly encourage you to keep tagging us on (, , , ), and we’ll do our best to check everything out! 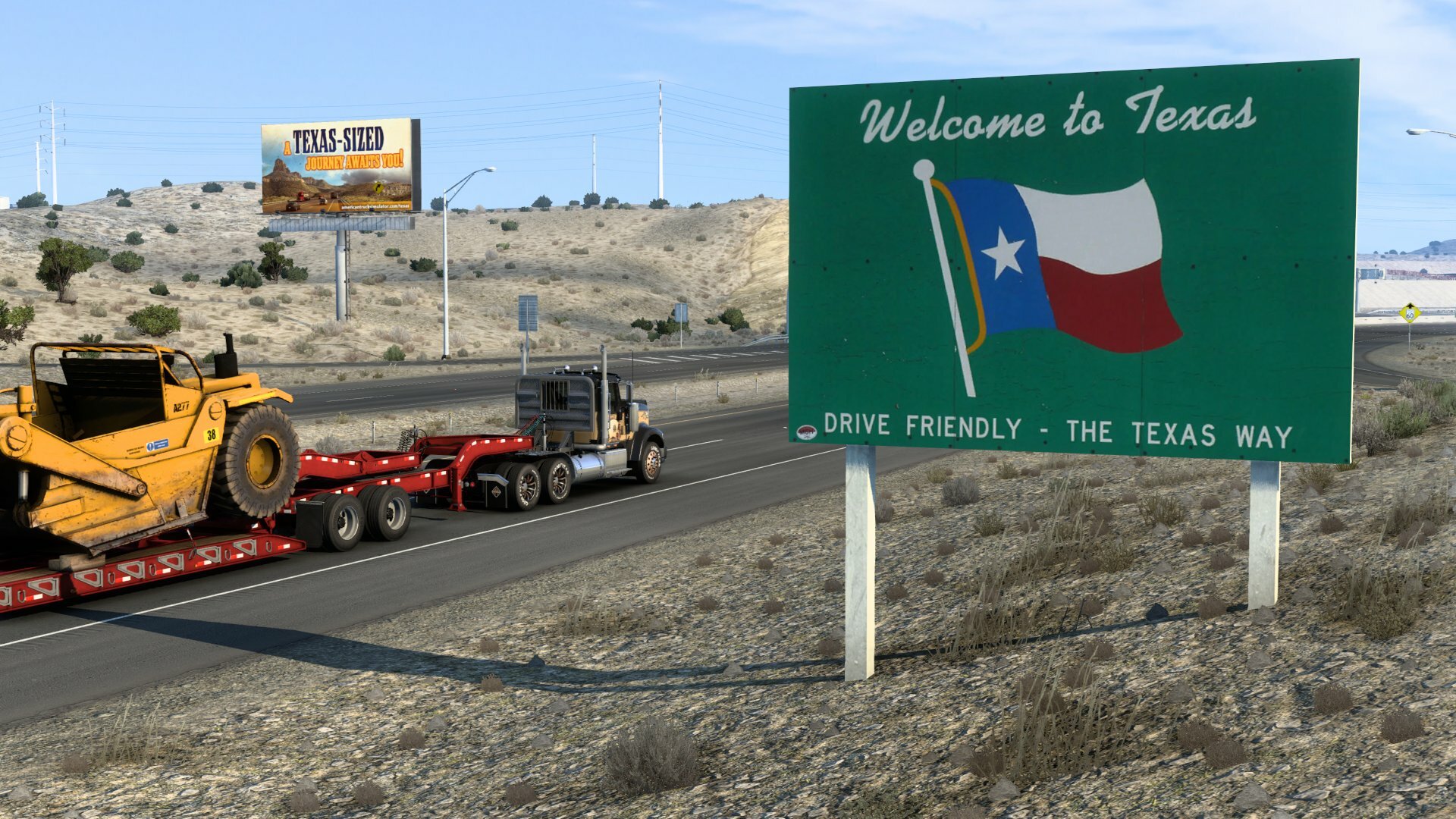 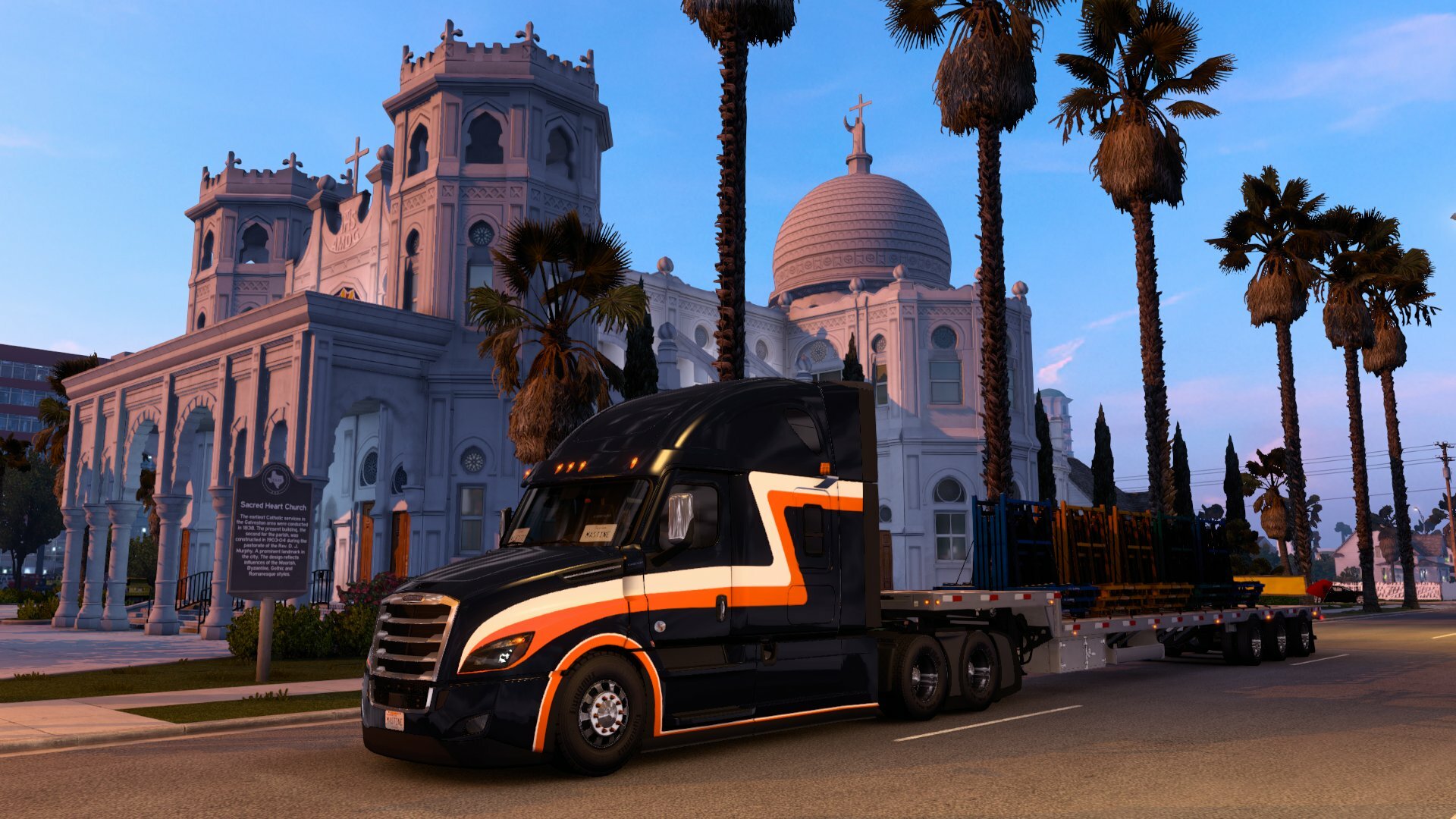 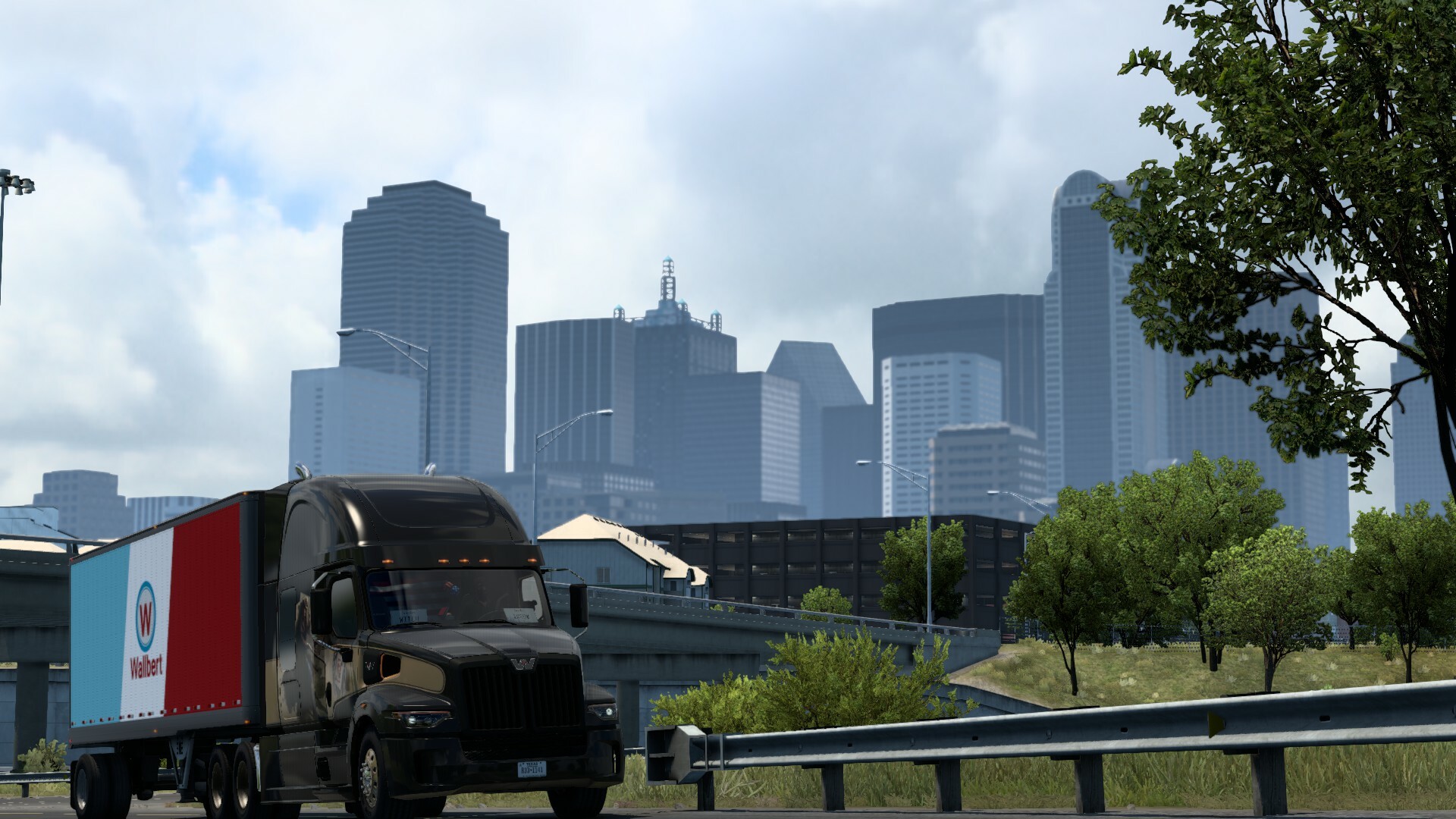 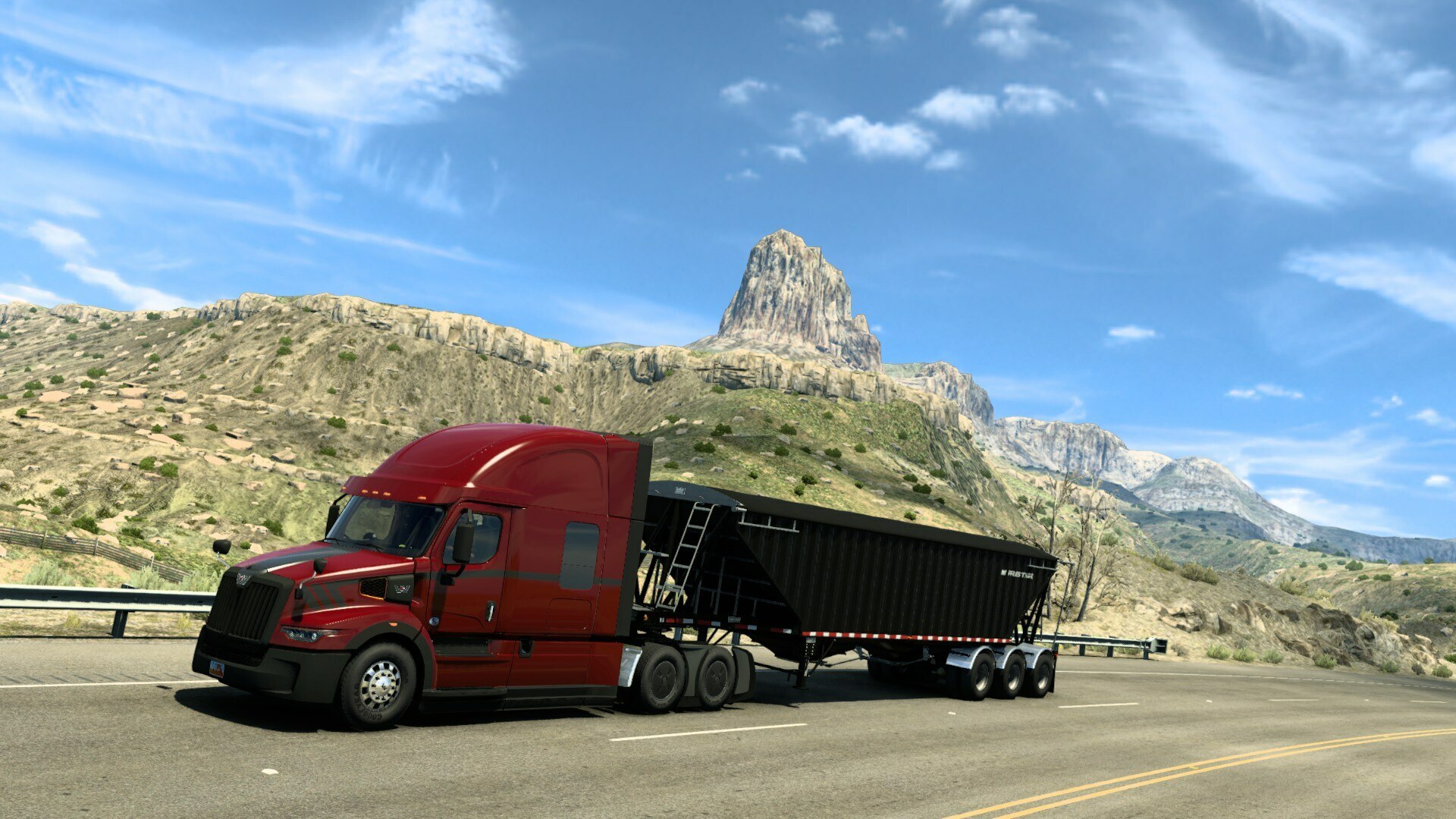 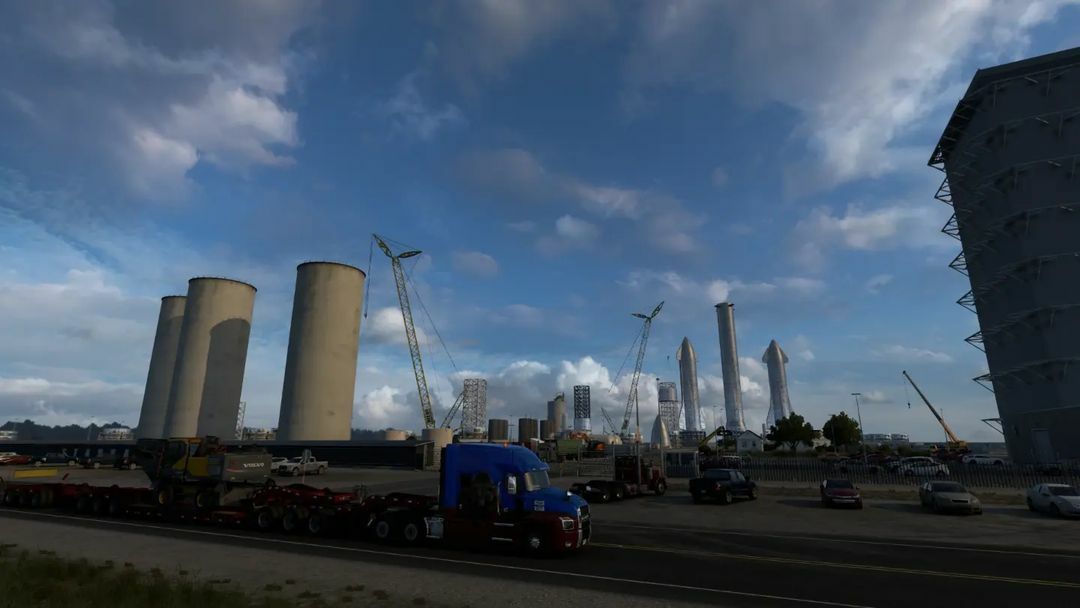 However, the sea of community feedback is wide, and we were also amazed by hundreds of positive reviews on Steam. We appreciate everyone who put out the effort to let us know about the best parts of the DLC along with providing us with constructive criticism. Following are some of our favorite reviews. If you would like to write a review yourself, you can do so on the . 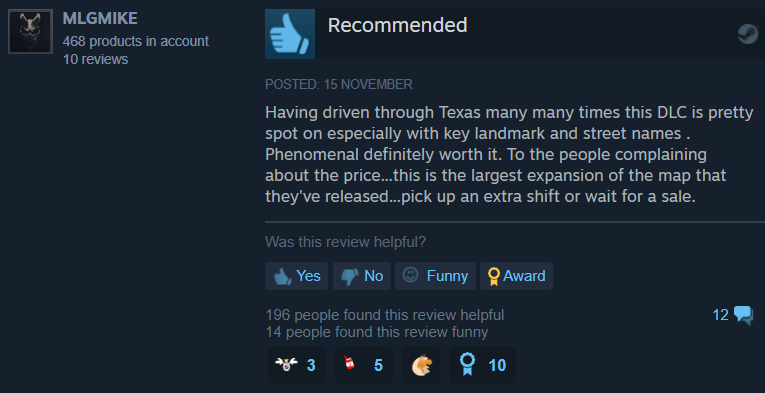 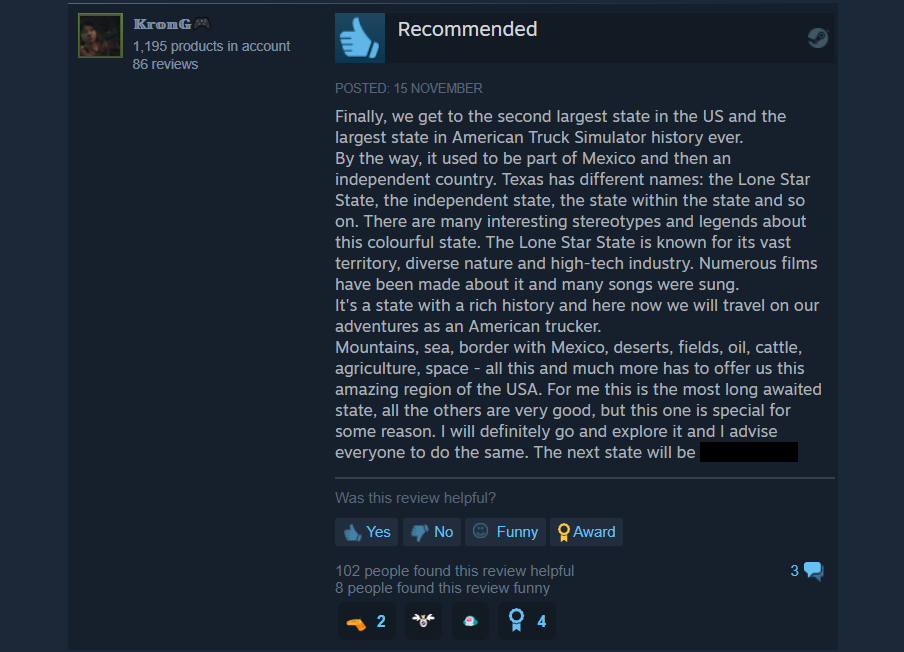 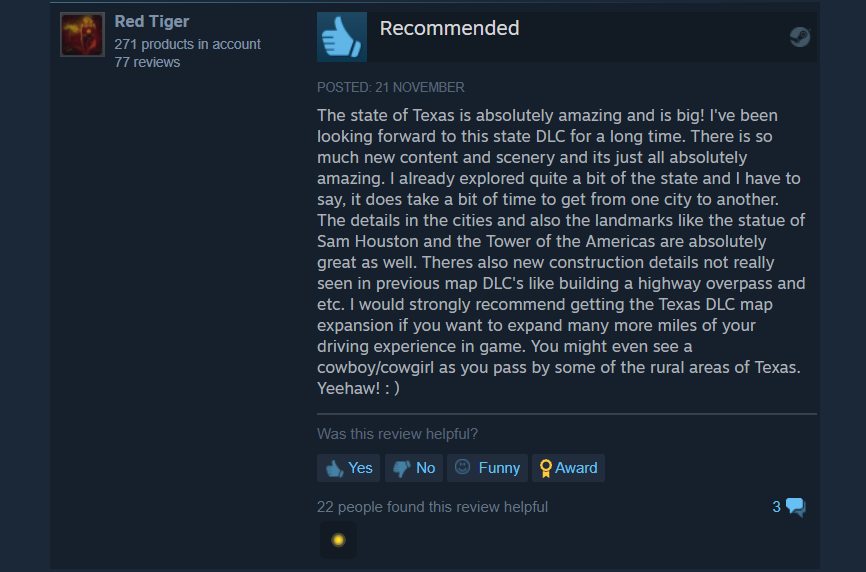 And speaking of which, the latest map DLC managed to get the attention of multiple internet video game journals, resulting in awesome reviews, such as this one by . If you are unsure what to expect before purchase, you might want to check the full article out.

We have also reached out to some of your favorite content creators (a couple of them are actually from Texas!) and they were kind enough to write us short reviews about their experience. Check out what they had to say about this massive addition to the world of American Truck Simulator. 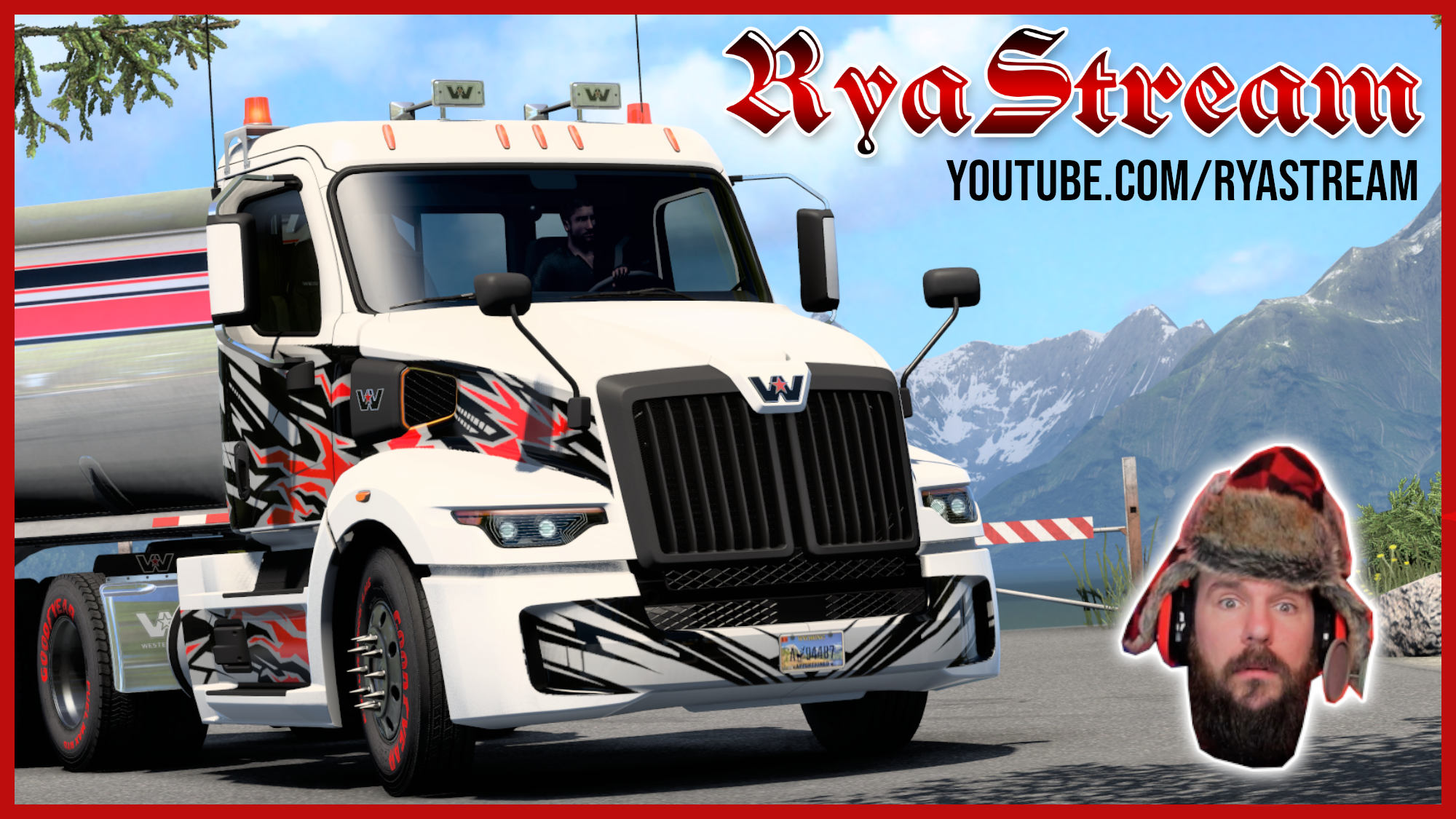 Texas was by far the most anticipated state since Colorado, at least for myself and I am sure a lot of others as well. We all knew it was going to be a huge undertaking but I do not think anyone expected the amount of content that was included in this DLC! So many huge cities, small towns, open roads, flat ranch lands, and everything in between. I kept saying it is going to take me a long time to explore all of it. As a space nerd, seeing the Johnson Space Center and Launch center near Brownsville was very exciting! My favorite part that maybe some won’t notice is the vast distances you can see in some areas. That adds to the immersion of an already very detailed state! And the truck stops are extremely accurate which is a great addition! Once again one of the best states in the game so far! – 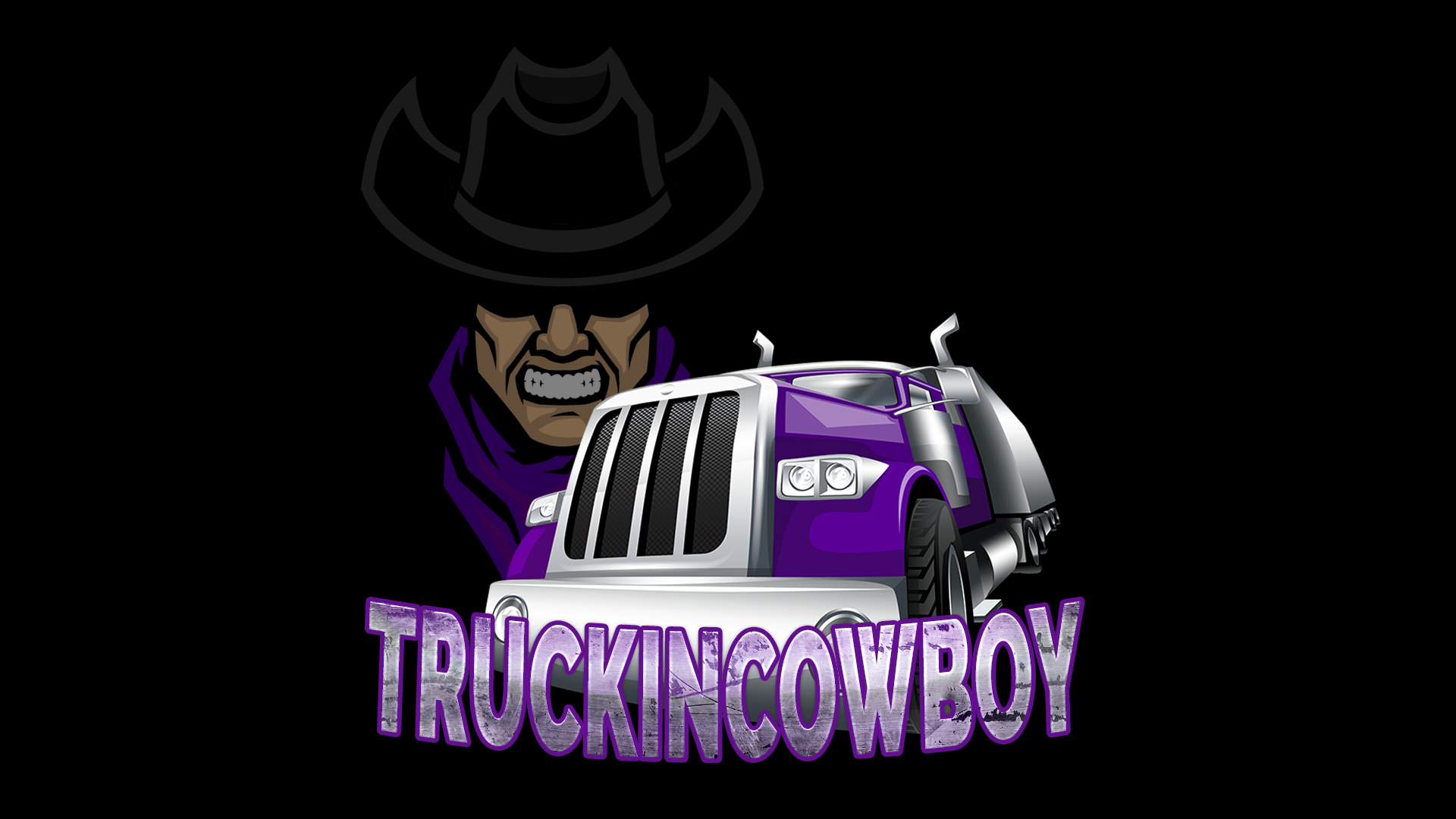 Texas! Being a Lone Star State resident I feel right at home. I’ve been looking forward to this DLC for a long time now, and let me tell you it did not disappoint. From Dalhart to El Paso or Brownsville to Longview the scenery and landscape are true to Texas. The new cargo and companies really add to the size of this DLC making it the biggest and best from SCS Software for American Truck Simulator. From big details to small SCS represented Texas very well. Catch you all on the open roads! – 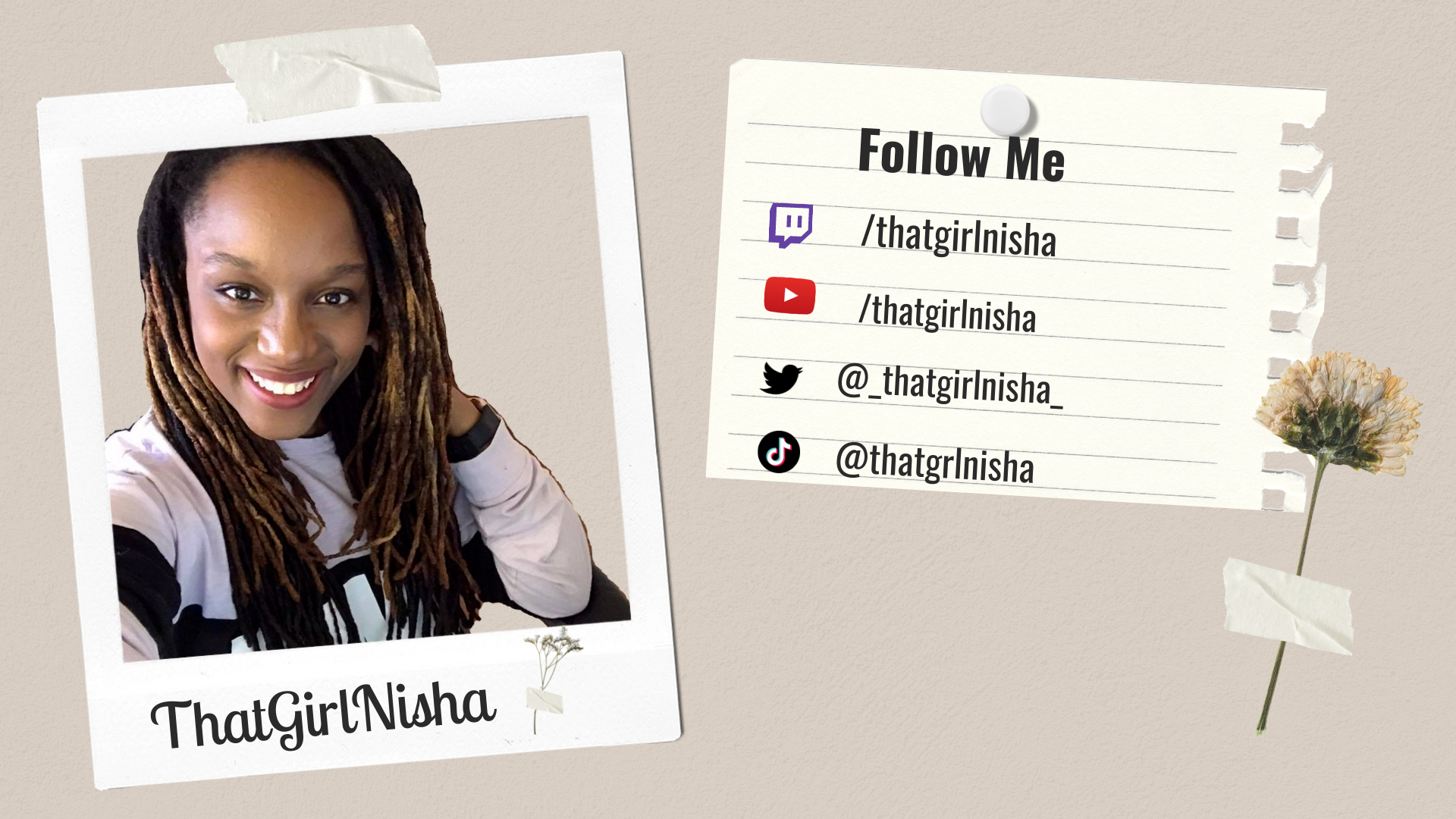 Let me start off by saying “WOW”!!! I knew that this DLC was going to be amazing but it is much more than that. With Texas being my neighboring state, it feels amazing to just drive through there whenever I feel. I was blown away at how most of the POI’s in the state were absolutely spot on. Being able to drive past known locations and share with my community stories of what my experience was like while I was there was the best thing ever. I was even able to share a picture comparison while in Galveston, Texas. Absolutely beautiful. Thank you SCS Software for trusting me with early access and allowing me to share the experience #BestCommunityEver! – 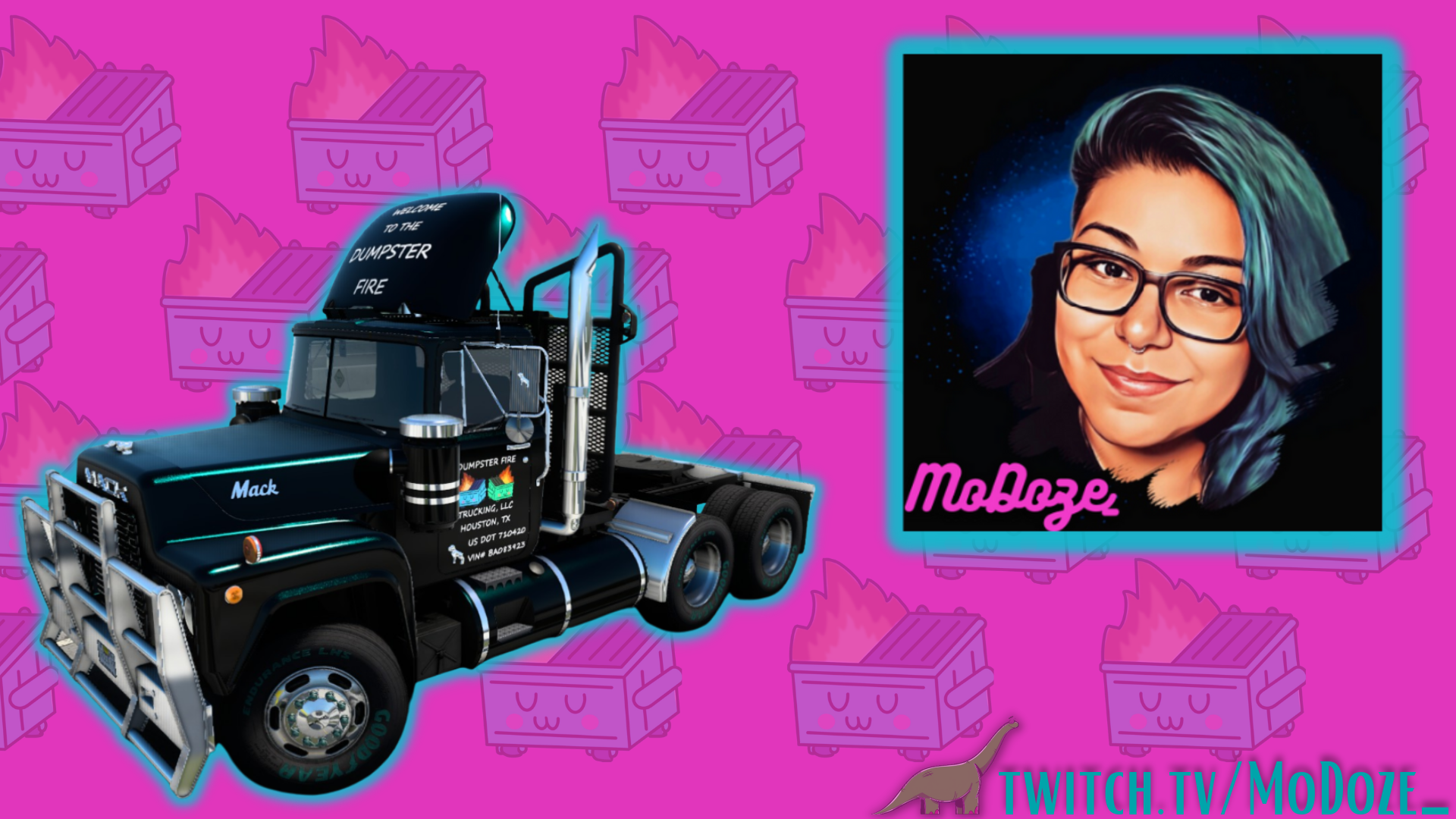 It’s great to see a game developer take the time to recreate landmarks and cities in a game to make it seem realistic. As a native Texan, it has been nice to be a tour guide to the community and show where I am from. This DLC has added hours of new gameplay and roads to explore with friends or solo. From landmarks such as Route 66 to the Corpus Christi Bridge, there is plenty to see and great opportunities for group photos and screenshots. “Everything is bigger in Texas.” –

To say that we were blown away by the power of the #BestCommunityEver once again is an understatement. With the release of the DLC, we also started the #CruisingTexas World of Trucks event and it only took a bit over two weeks for you to smash the community goal of 125,000,000 miles (201,168,000 km). Absolutely outstanding! But no need to panic, you still have time until the 15th of January, at 23:59 UTC to get your personal rewards, which you can find out more about in the dedicated .

In the end, as you can see, we have truly just been flooded with a lot of feedback ever since the release. The Lone Star state presented a true challenge to our developers and we are glad the project managed to receive so much attention. Thank you all very much!