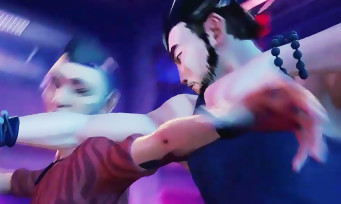 Rare enough to be underlined: Sifu has just had its release date brought forward, since the game goes from February 22 to 8, 2022, whether it is the PC version like PS4 and PS5. It must be said that with the number of games that will be released during this period, it is better to find the right time to exist in stalls and online stores. The Sloclap studio, which also acts as editor for this time, publishes a short video of 30 seconds to warn us of the good news, using the same codes in the game where we change age, as every time. respawn. But the French studio is not stingy with information, we are also entitled to two other videos posted on their YouTube channel where we can better understand the gameplay, and in particular the combat system. First of all, there is this desire to offer a game in which the martial arts are not at fault, with real situations that appear credible, even if the main character is surrounded by several opponents.

Beyond authenticity, the developers also wanted a game that reflects the values ​​conveyed by kung fu, namely training and self-improvement. There is also this desire for players to feel progress, that they have the impression of learning kung fu, of improving themselves and of gradually earning this feeling of power. To do this, the French studio has set up what they call the Structure system, which allows the use of impacts to break the opponent’s posture, and therefore their ability to attack and defend themselves. We also learn that blocking attacks will fill a balance gauge, knowing that parrying an attack at the right time allows you to deflect the blows, which will have the immediate effect of unbalancing the opponent, which will give you the opportunity to counter. attack or throw it to the ground. Keep in mind, however, that some powerful attacks are impossible to ward off, while in some situations it will be difficult to regain your balance and counterattack. This is where these dodges become particularly useful. In short, you will understand, Sloclap really racked its brains to offer a game with real depth.

But that’s not all, the developers have also returned to the respawn system, which, as you know, directly impacts the character since each game over, he will come back older. All this is justified by the presence of a pendant capable of healing it and bringing it back to life. The latter needs life energy and each time he brings the character back to life, the latter is aging. You will therefore have to be careful to reach the end of the quest. Fortunately, getting older does not mean that you weaken, on the contrary, but it will have an impact on the character’s abilities. We will gain strength but we will lose health, so it is a balance that must be found, knowing that it is quite possible to finish the game at any age. Good to know.