A few weeks after the nice The Smurfs: Mission Malfeuille and while waiting for the beat’em all Asterix & Obelix: Slap them all, Microids invites us to have a good time with another famous character from the comics, a certain Marsupilami. The creature imagined by André Franquin is indeed back in the video game after 26 years of absence. A comeback on its own land (the first game was published by SEGA and developed by Apache Software, an English studio) signed Ocellus Studio, a French company based in Lyon, used until now to work with Supercell for games well calibrated mobiles. It is thanks to its collaboration with Microids that Ocellus Studio can aspire to greater ambitions because this Marsupilami: The Secret of the Sarcophagus is a great success on many levels. Explanations. 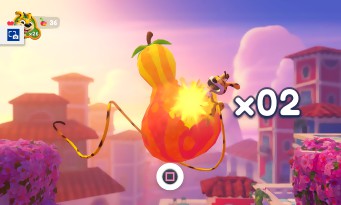 When its gameplay was first unveiled on video last August, Marsupilami: The Secret of the Sarcophagus did not hide its inspirations. A bit of Rayman here, a touch of Sonic there and a lot of Donkey Kong Country too, including the Returns and Tropical Freeze episodes, the title developed by Ocellus Studio borrows a lot of mechanics from these platform game references. At the controls of the young generation of marsupials, the player can indeed choose between Punch, Twister and Hope, whose only difference is the color of their dress. No gameplay distinction, it is just a cosmetic choice that it will not be possible to change along the way. After having made our choice, we embark on this adventure which will take us through three worlds divided into 28 levels. Said like that, it’s a bit light and it is true that the regulars of platformers risk to finish the game in a small afternoon. But it is obvious that this Marsupilami: The Secret of the Sarcophagus was cut above all for a young audience, even if certain passages, in particular those against the bosses, risk giving a hard time to our young shoots. These will obviously take longer to complete the adventure, especially since the title promotes replay value, with a lot of hidden areas, special items to collect to obtain 100% at the end of each level, not to mention the Time Attack versions of each of them for those who love speedrun. Yes, Marsupilami: The Secret of the Sarcophagus is primarily aimed at children, but the game is really challenging, especially in the later levels. 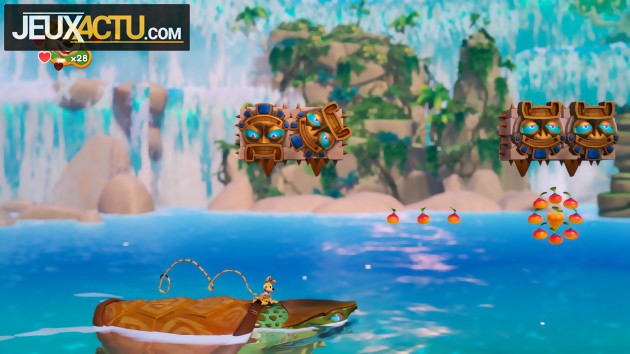 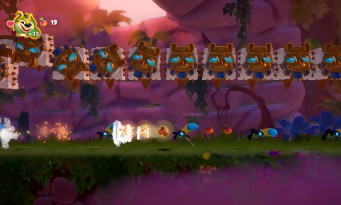 However, Marsupilami: The Secret of the Sarcophagus can be explored with great pleasure. Already because visually, the title of Ocellus Studio flatters the retina at every moment, it is a state of affairs. Colorful, varied, rich in its environments and offering lively levels, the game really has nothing to be ashamed of against other behemoths of the genre. Special mention to these differences in focal lengths, which blur the backgrounds and thus make it possible to bring out the action in the foreground. It is all the more pleasant as in the levels at the edge of the water, this effect gives the feeling of being on vacation, somewhere on the Caribbean islands. It is both exotic and comforting, especially in these moments of confinement when traveling is still complicated. Another game design bias that is fun: the differences in plan value, with moments that are closer and others that are more distant. A small zoom and dezoom effect that highlights the staging quite well. It is always discreet, but it systematically has its small effect. And it rhymes too. Speaking of realization, we also appreciate these little moments when the game knows how to play with light. There are these bonus stages, for example, where you switch to Chinese shadows, but also these twilight passages when you face the first boss for the first time, or even the levels plunged in the dark with just enough to light up your lantern. to be able to move forward. Casually, it generates a certain atmosphere and for the moment, it is rather successful. In truth, this Marsupilami: The Secret of the Sarcophagus does not lack much to be totally subjugated, except perhaps aquatic levels. For a possible continuation perhaps. 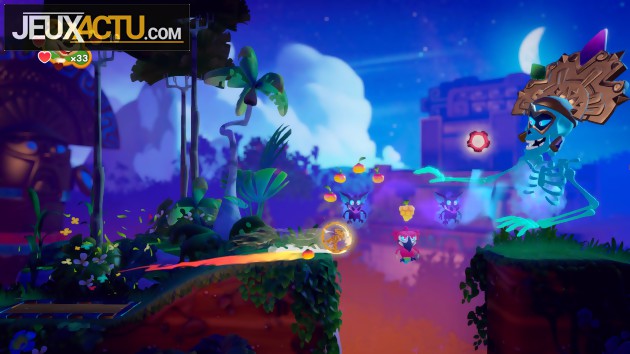 However, Marsupilami: The Secret of the Sarcophagus can be explored with great pleasure. Already because visually, the title of Ocellus Studio flatters the retina at every moment, it is a state of affairs. 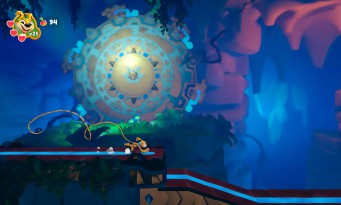 Visually pleasing and even surprising, does Marsupilami: The Secret of the Sarcophagus manage to convince in its gameplay? No need to play the suspense for too long, we have known since preview sessions that the game uses the mechanics of Donkey Kong Country. Some may blame him for inspirations close to plagiarism it is true, but it is clear that the transfer of ideas works extremely well. We can just blame the developers for very questionable game design choices. Having to tap the button (instead of holding it) to sprint for example, it’s a bit of a heresy; just as it would have been appreciable to introduce the double-jump to give more amplitude to the marsupial. We would also have liked to be able to jump and kick the tail at the same time, just to make certain actions more flexible. We can also point the finger at a certain inertia in the character, which perhaps lacks a little agility and response so that the gameplay is really perfect. It is indeed in the more delicate passages where it is necessary to be irreproachable in its jumps with momentum that one realizes that the movements lack flexibility. Nothing very dramatic, but even if it means perfectly mimicking the methods of Retro Studios, you might as well go franco. 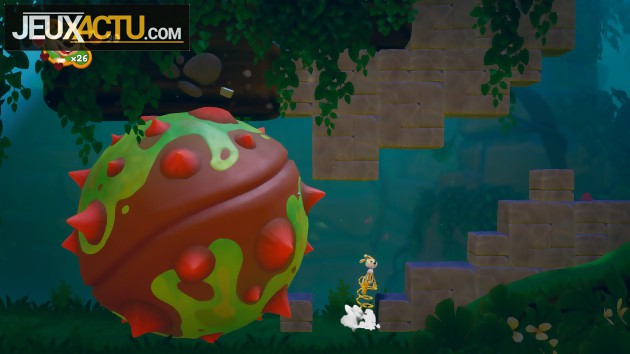 THE PLATFORM, IT SHAPES 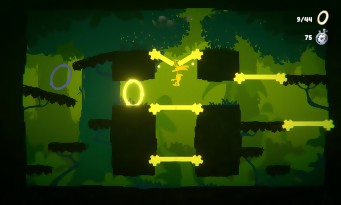 Like any classic Nintendo-type Mario or Donkey Kong platformer, each level has a route to follow on a map in aerial view. Most are unlocked by completing each stage, while others require obtaining bonuses, such as a prescribed number of feathers or tickets that must be collected during its course. It’s the little Replay Value touch of the game that doesn’t hesitate to tell the player to come back later to finish the adventure at 100%. And proof that the title wishes to highlight a certain replayability, for each course is offered a “Time Attack” version, just to add challenge and why not see speedrunners take ownership of the game and show their skills through videos to the wow effect. Because all the same this Marsupilami: The Secret of the Sarcophagus is aimed primarily at young audiences, it also offers them a good margin of progress with this type of content. And I had already meant it for my preview, it’s also a sign that developers never look down on their audience, no matter how young. And that is respectable.