Hyrule Warriors test The Age of the Scourge: what to wait until the next real Zelda?

Released in 2014 on Wii U, the first Hyrule Warriors could in no way take advantage of the aura of Breath of the Wild, released three years later on Switch. This first attempt to adapt to the very particular genre of musō was therefore more of a first attempt than a master stroke. But the developers of the second opus that interests us today have fully understood how to benefit from BOTW, since they take over the artistic direction, some gameplay elements, and position the game as a prequel to the open world blessed by the press and players.

This last statement is expressed naturally through the scenario, which features a small robot that one would swear out of Portal 2. This guard has gone back in time in order to prevent the Great Plague Ganon, whose misdeeds are already beginning to be felt since the monsters keep multiplying in the prairies of Hyrule. Guided by this lovable metallic being, Princess Zelda sets out in search of the Cleansing Blade, the power of the Royal Family Seal and four gigantic divine creatures. From the first clashes against the forces of evil, a young knight of the royal guard named Link stands out from the others and becomes the main character of the story. As you will have understood, we are entitled to a scenario typical of Nintendo games, which seeks more to provide one-off fan-service than to enrich a unique and coherent universe, and which dares presentation sentences such as “the Gorons live in the Goron village “or” the Gerudos live in a city of the Gerudos lands “. Surprising, isn’t it? In short, we are not here for the story, but for musō-style battles, which place us against hundreds of enemies in which we generally enter like butter, with the exception of intermediate opponents and bosses . 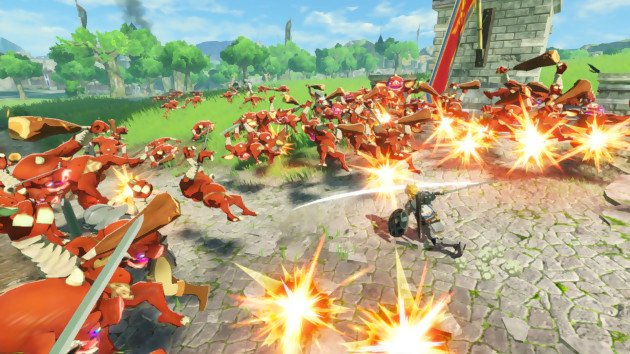 It’s a special genre and, of course, you have to be sensitive to it to be able to appreciate Hyrule Warriors. But we must admit that the game does things quite well in terms of gameplay, richer and more interesting than average. Thus, we have a standard attack, a strong attack, a dodge and a fatal blow to trigger when the corresponding gauge is full. It is also possible to use wands (fire, ice and lightning), throw bombs from a distance, create a block of ice to stop the charge of certain opponents, cast a magnetic spell to attract coins metal, or immobilize enemies for a few seconds using time mastery. The ultimate refinement comes from the weak point system, which can do a lot of harm to large enemies by crashing into their Achilles heel after successfully dodging. A few hits are enough then to put them directly on the ground or, at the very least, to seriously affect their bar of life, which often drops only slowly with standard attacks. 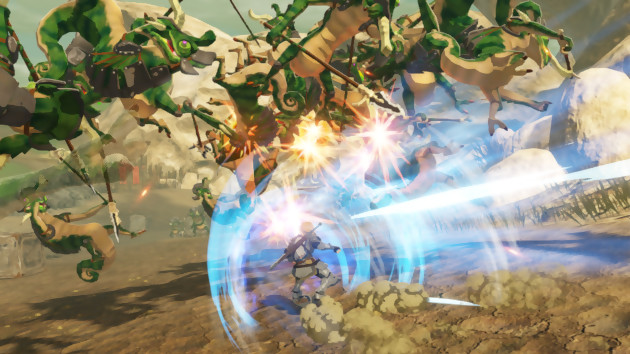 THEY CAME, THEY ARE ALL HERE

This system could have been sufficient, but it is enriched by the presence of several characters with very different capacities. So, while Link is able to shoot some arrows, Zelda throws sort of elemental cubes, Impa summons ghostly doubles, Daruk has a shield that allows him to resist explosions and Urbosa controls lightning. And that’s not counting the presence of Mipha, Revali, Hestu, Riju and others, for a total of eighteen well-differentiated characters. You are free to choose one in particular or to regularly switch from one to the other, including in the middle of the game since we go on a mission together most of the time. Note that at certain times we also take control of one or other of the divine creatures mentioned above, which we could compare to giant robots and which cause damage worthy of a musō squared or almost, since the enemies no longer fall by the hundreds under our blows but by the thousands. It lets off steam ! The best idea of ​​the game is still its affiliation with Breath of the Wild, to which the Era of the Scourge tries to stick as much as possible. An approach that could possibly be deemed opportunistic but which, let’s face it, is proving to be very effective. Thus, you will certainly have noticed some names from BOTW in the list of fighters mentioned above. Even more evidently, the game takes over the artistic direction “cel shading” of the famous open world, and even seems to directly integrate several models of heroes and enemies. There is also a realistic management of elements, such as lightning on metal or fire that propagates in the grass. In addition, the game offers us a bonus weapon if it detects the presence of a Breath of the Wild save on the console, and reuses the principle of cooking recipes that provide advantages in combat.

THE ERA OF THE PLAGUE … AND SOME LOWS

The Sheikah tablet is also making a comeback. Here, it is used to display the world map between two levels, and allows you to select the next one among several main, secondary or even “text” missions. Achievable in two clicks in menus, these real-false missions allow you to unlock merchants, learn new cooking recipes, increase the number of hearts of a particular fighter, access a blacksmith to merge the weapons collected during fights, or to open the “field of maneuvers”, thanks to which we can level up a character that has not yet sufficiently controlled. Even the Paravail answers the call in this second Hyrule Warriors. However, we can only use it in very specific places, because we are not (at all, at all) in an open world. Moreover, the game ignores a standard jump function. You have to be content with “wall jumps” to trigger in front of a wall, to bounce on it and float briefly in the air (with a camera which does not really know where to turn in the process). We would have much preferred to be able to jump like a kid in the scenery. This is not the only shortcoming of the title, which does not offer online multiplayer mode and is satisfied with a simple local split-screen mode. Finally, Hyrule Warriors: Age of the Scourge simply suffers from the Switch’s lack of power, more obvious than ever in the next-gen era. We must therefore be content with rather blurry graphics, a fluctuating and often very low dynamic resolution, as well as a framerate far removed from the sacrosanct sixty frames per second.