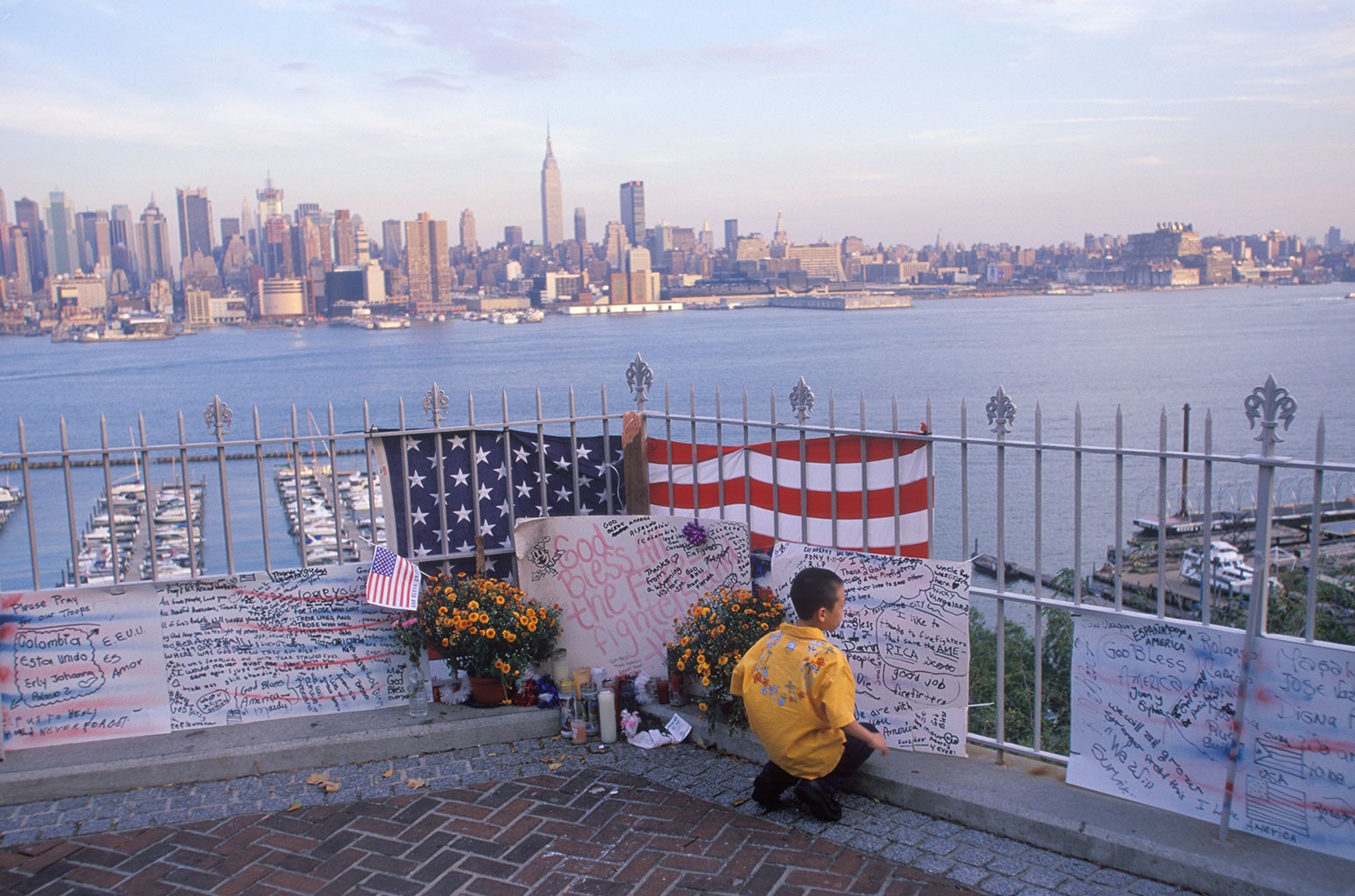 These days, the convenience and accessibility of streaming allows headlines to impact the Billboard Hot 100 quicker than ever before. Earlier this year, for example, no fewer than four DMX singles re-entered the Hot 100 within two weeks of the rapper’s untimely death. At the turn of the century, though, when Spotify was still a pipe dream and the much slower metrics of physical sales and airplay were still the most important, it took a little longer for the chart to react to the mood of the nation. It’s why the singles charts of October through November 2001 appear far more somber than in the weeks immediately after 9/11.

Billboard‘s tracking methods meant the first possible chart that could be affected by that fateful day was the one dated Sept. 29. Lee Greenwood’s “God Bless the U.S.A.,” a Gulf War favorite later covered by the American Idol season 2 finalists and Beyoncé, was initially the patriotic anthem most radio programmers, particularly in the country field, turned to. Recorded in 1984, the song had been written in response to another tragedy, the Soviet Union’s shooting down of a civilian Korean Air Lines flight. But as an ode to the freedoms of Uncle Sam, it immediately resonated with proud Americans again 17 years on, resulting in a new No. 16 peak.

However, the attention soon switched to the most flag-waving of them all, “The Star-Spangled Banner.” Whitney Houston’s showboater was the version many gravitated toward, returning it to the charts (No. 50) for the first time since the brouhaha over her performance at the 1991 Super Bowl. It eventually surpassed its original No. 20 peak by 14 places and remains the only national anthem to achieve top 10 success.

Entering at No. 44 was Enrique Iglesias’ “Hero.” The first single from his second English-language album, Escape, had been released just a week before the events of 9/11 and was adopted as an unofficial anthem by various New York radio DJs. The melodramatic Latin-pop ballad was even interspersed with audio footage of real-life heroes at Ground Zero by some, while the Spanish singer’s performance at the televised America: A Tribute to Heroes further cemented its status as a hymn for the bereaved. “Hero” would eventually peak at No. 3 two months later where it was sandwiched between Jennifer Lopez’s “I’m Real” (the Ja Rule-assisted remix which bore no resemblance to the original whatsoever) and Alicia Keys’ “Fallin.” Remarkably, these enduring hits were also sitting pretty in the top two the day of the terror attacks.

Yet the song that connected most with a grieving America in the immediate aftermath was one with no obvious link to the tragedy. Enya’s “Only Time” had first entered the Hot 100 in the July having been used in NBC’s promos for Friends‘ eighth season (it also featured in “The One Where Chandler Takes a Bath”). But its calming New Age production and ruminations on the uncertainties of life also became the go-to soundbed for TV networks needing something soothing to play over all the traumatic imagery. “Only Time” achieved the biggest airplay gain in the first true post-9/11 chart and would eventually give the Gaelic Queen, who donated all its proceeds to a firefighter relief fund, a top 10 hit.

In another stroke of coincidental timing, the chart dated Oct. 6 welcomed a who’s who of contemporary hitmakers delivering an anti-war sentiment. Prior to 9/11, the likes of Gwen Stefani, Fred Durst and Britney Spears had assembled for a cover of “What’s Goin’ On,” the Marvin Gaye classic which had reached No. 2 back in 1971, as Artists Against AIDS Worldwide. Its questioning lyrical themes, however, appeared to sum up the general bewilderment over the atrocities and during its chart run (peak No. 27), organizers decided a percentage of the money it raised should also go to charities benefitting the victims.

That same week country music singer Tammy Cochran scored her only Hot 100 entry (No. 73) with “Angels in Waiting.” Although the heartfelt tribute to two older siblings who’d passed away from cystic fibrosis had been released seven months earlier, for many it perfectly captured the wider sense of loss, too. It was a similar story with David Ball’s “Riding with Private Malone” (No. 36), the sentimental tale of a returning soldier who buys an old Chevy one owned by a late – and possibly ghostly – Vietnam War vet. Already a slow-burning radio hit, USA Today hailed it as “the country song that tapped most subtly and profoundly into the emotions of its audience.” Alongside poppier efforts from Cher (“Song for the Lonely,” No. 85) and Mariah Carey (“Never Too Far/Hero Medley,” No. 81), Lonestar’s “I’m Already There” (No. 24) would also be repurposed in a similar fashion.

Perhaps unsurprisingly, it was the Nashville scene that first directly responded to the events of September 11. “Where the Stars and Stripes and the Eagle Fly” had been co-written by Aaron Tippin for his 2000 LP People Like Us. Yet the singer only felt compelled to record its allegiance-pledging lyrics two days on from the horrors of September 11: within a month it had given him the biggest of his four Hot 100 hits (No. 20).

And then in November, country music’s premier post-9/11 anthem arrived. Alan Jackson’s “Where Were You (When the World Stopped Turning)” received a standing ovation after premiering at the CMAs. It later earned the singer his first Grammy and became the first entirely original hit (No. 28) inspired by the darkest day in modern American history, just beating Paul McCartney’s “Freedom” (No. 97, Dec ’01) to the punch. It even received the early ’00s ultimate badge of honor – a merciless mocking on South Park.

Jackson’s line of probing may have seemed overly simplistic to some, but he undoubtedly had his heart in the right place. Toby Keith’s “Courtesy of the Red, White and Blue Flag” (No. 25, Aug ’02), on the other hand, was considered far more jingoistic (sample lyric: “And you’ll be sorry that you messed with The U.S. of A/’Cause we’ll put a boot in your ass/It’s the American way”). The Chicks’ Natalie Maines famously took particular umbrage, with her accusations that it “makes country music sound ignorant” sparking one of the most incendiary feuds in the genre’s history.

Keith’s rally cry, however, sounded positively restrained compared to Darryl Worley’s “Have You Forgotten,” a fervent pro-military anthem (“Some say this country’s just out looking for a fight/After 9/11 man I’d have to say that’s right”) which reached No. 22 in April 2003. Described by the Chicago Tribune as reading “like a Bush position paper for entering Iraq with guns blazing,” the track showed how 9/11 was being addressed differently with a little more distance.

While Eagles’ “Hole in the World” (No. 69, Aug ’03) and Twista feat. Faith Evans’ “Hope” (No. 31, Feb ’05) proved some artists still wanted to heal and unite the nation, others began to approach the subject from more challenging angles. “The Rising” (No. 52, Aug ’02), the title track from Bruce Springsteen’s 9/11-themed album, was a harrowing account of a firefighter’s fatal ascent up one of the recently-hit World Trade Center towers. Heavy metalers Disturbed’s “Prayer” (No. 58, Nov ’02) was partly inspired by the televangelist movement’s’ finger-wagging response, while its accompanying video was banned by many outlets for depicting an apocalypse deemed eerily similar to the Twin Towers’ collapse.

And then in 2004 Jadakiss courted controversy with “Why” (No. 11, Oct ’04), a protest song which leaned into the inside job conspiracy theory (“Why did Bush knock down the towers?”). Lupe Fiasco would also court the Qanon crowd seven years later (“9/11, building 7, did they really pull it?/Uh, And a bunch of other coverups”) with No. 89 hit “Words I Never Said.”

However, the hip-hop world’s first 9/11-addressing hit had arrived with the USA Flag Remix of Petey Pablo’s “Raise Up” (No. 25, Nov ’01). With lines like “And could somebody tell Mr. bin Laden/He got a lot of people lookin’ for him,” it would undoubtedly have been placed on Clear Channel’s rather arbitrary list of banned songs had it been released earlier. Still, while Pablo’s chart journey wasn’t thwarted by the memorandum – whose existence still seems up for debate – others might not have been so lucky.

Would Bush’s “Speed Kills” (hastily changed to “The People That We Love”) still have missed the Hot 100 had it not been deemed ‘lyrically questionable’ by the powers that be, for example? Would System of a Down, whose second LP Toxicity topped the Sept. 22, 2001-dated Billboard 200, have climbed higher than No. 76 on the Hot 100 if “Chop Suey!” hadn’t featured the lyric, “I don’t think you trust in my self-righteous suicide”?

We can only speculate, of course. But reaching No. 36 just last year, Eminem’s “Unaccommodating” (“And you backpedal that as a cowardly act/Like a Saudi attack when the towers collapse”) showed even two decades on, the Hot 100 will still occasionally bear echoes of that unimaginable day.