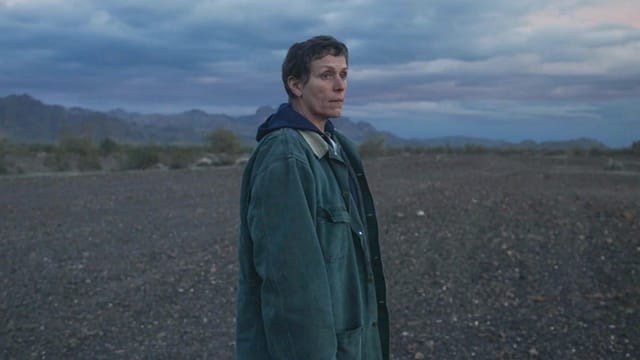 Nomadland is the story of a woman who has lost it all, and where she goes from there. When her small-town community disappears after the Great Recession swallows up the only business supporting it, an older woman must hit the road and live in her van to make ends meet.

Fern (Frances McDormand) is a blue-collar Amazon seasonal employment worker, living out of her van. Her friend Linda (Linda May) guides her on how to live and thrive in such a small space. As the season ends, Fern finds herself taking any unskilled job she can get. She slowly finds herself being guided toward the Rubber Tramp Rendezvous in Arizona. There, people like herself are learning to cope with long term living out of their vehicles.

Despite her extreme poverty, Fern barely manages to make ends meet as she at least is able to scrape meals together. And while she doesn’t have the privilege normally associated with the American Dream, she does have the true freedom to hit the road at any time, and explore the wilds of the American west.

Fern’s backstory reveals that she hails from the very small town of Empire, Nevada, which relied entirely on The United States Gypsum Company for her subsistence living. Despite financial hardship, she was content to be going through the struggle with her husband, although he passed away shortly after the metaphorical death of their town.

As Fern comes to grips with the hardships that she’s been dealt and is currently dealing with, she takes it all in stride, ready to take on whatever lies ahead.

Director and screenwriter Chloé Zhao (The Rider, Songs My Brothers Taught Me) is laser focused on showing, not telling. Images and emotions are tools to bring this story to life, and she doesn’t try to influence anyone on what it all means. Based on a nonfiction book by Jessica Bruder, Zhao has chosen to bring class struggle without a redemption or hero story to Nomadland. Primarily picking at the minutia, she ends up with something much larger and lovelier than it deserves to be.

One fascinating choice was to use real van-life advocates as actors in the film with the majority of the supporting characters’ names are the same as the actors’ real-life names. This unique insight into a small group of people amps up the realism already present in the film.

Beautiful and haunting, the cinematography in Nomadland follows Fern across the gorgeous and diverse western US landscape for the ultimate search for something within; it is also resonant with the hero’s lost perspective on life. Rolling hills and roads that slip into the horizon endlessly, with no destination, are like Fern’s own little metaphor manifesting itself in real life.

While Nomadland offers visual and emotional treats, it may suffer from not appealing to a mainstream audience. Its lack of a traditional hero and villain, a concrete plot, and car chase scenes will make it a slow watch for some. But the depth to which it truly explores a character, which would normally not be in a starring role, allows for a rare, genuine, and unique story to be told.