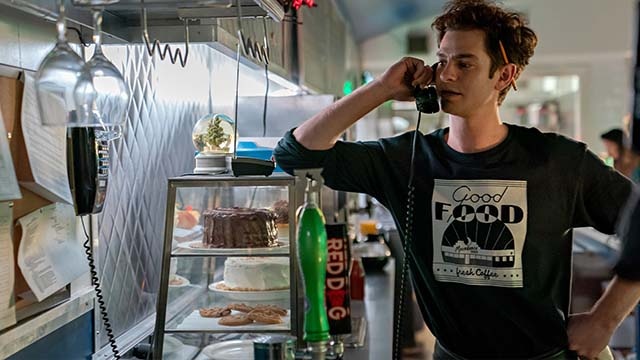 Approximately thirty years before this film’s release, composer Jonathan Larson, played here by Andrew Garfield (The Amazing Spiderman, The Social Network), created the smash-hit 90’s show Rent but died at 35 of an aortic failure, just before opening night, a tragic metaphor for the backstage heartbreak of musical theater. tick, tick…Boom! is Larson’s autobiographical piece that comes just before Rent and tells the story of his first major musical project: 1990-set rock musical about a New York playwright struggling to find his voice as the days and minutes tick down to his 30th birthday. Adapted for the screen by Steven Levenson, it is the directorial debut of the Tony- and Pulitzer Prize-winner Hamilton genius that is Lin-Manuel Miranda.

A struggling playwright who waits tables at the diner, Jon Larson (Garfield) is trying to complete Superbia, the futuristic dystopian musical he’s been working on for the past eight years (which is also Larson’s first original musical theater piece). The production’s first song, “30/90,” finds Jon stressing out over his upcoming 30th birthday and lamenting his lack of creative and professional achievement. There are dramatic scenes as well as more elaborate production numbers featuring Jon’s girlfriend, Susan (Alexandra Shipp, Jexi), his gay roommate and childhood friend Michael (Robin De Jesús, Camp), and the supporting cast. Most of the first act focuses on Jon’s preparation for a workshop staging of Superbia and his sense of time slipping away as his friends begin to move on from the theater world.

Michael has already quit his unsuccessful acting career for a lucrative job in advertising and rents a fancy new apartment, the setting for “No More,” an amusing duet between Jon and Michael celebrating the consumer comforts of an upscale lifestyle. Susan, meanwhile, considers shifting away from modern dance performance and accepting a teaching job that would take her away from New York, a source of conflict with Jon that prompts a painful examination of their relationship in the downbeat “Therapy.”

With the workshop performance of Superbia only a few days away, Jon faces a creative crisis as he writes a song for performer Karessa (Vanessa Hudgens, High School Musical) to fill a hole in the second act. Stephen Sondheim (Bradley Whitford, Get Out), Jon’s musical theater idol and occasional creative mentor, originally points out the problem to him after an earlier workshop reading of the piece, but the young writer hasn’t yet been able to draft anything suitable. In a last-minute burst of creative energy, he composes “Come to Your Senses,” by far one of the film’s strongest tunes and a standout from Hudgens.

This story is beautifully and ironically poignant and gives theater a true stage for even the most skeptical of audiences. And now, the clock is ticking and there’s but only one question left to ask… what are we meant to do with the time we have left?