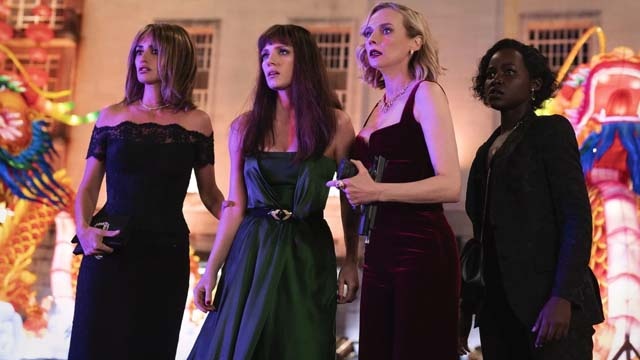 With an all-star cast, one would think that The 355, written and directed by Simon Kinberg, would be a phenomenal flick. Unfortunately, the film relies on too many double crosses and twists that don’t pay off. It is a fairly cookie cutter espionage action flick that tries to think its more than it is, due to its cast.

Jessica Chastain plays Mason “Mace” Browne, a CIA agent who is sent to Paris with fellow agent Nick Fowler (Sebastian Stan) to exchange $3 million for a hard drive that can manipulate all sorts of technology, from cellphones to airplanes. This exchange is thwarted by Marie Schmidt (Diane Kruger), when she tries to steal the hard drive for the German BND. Mace is then sent to England to recruit former MI-6 agent Khadijah (Lupita Nyong’o) to help track down the drive. Along the way, Mace recruits Schmidt because they are working for the same cause, to track down and destroy the hard drive, and they also include Graciela (Penelope Cruz) after they find out her fingerprint is the only thing that can access the tracker after the original holder of the hard drive has been killed. And before everything is all said and done, Lin Mi Sheng (Fan Bingbing) becomes a part of the team to take down the terrorist group who is also after the drive for world destruction.

This film seems to fall into a troupe of ending in a way in which they want to leave it open so that there could be a sequel and maybe be a new action franchise. So, instead of standing up on its own, it is already looking to a future film that is not certain. For a film that wants to set itself up in this way, one would think that it would bring something new to the table and it doesn’t do that in the slightest. Unlike recent action franchises that have unique sets of rules, eccentric characters, and new ways to shoot action sequences, this relies on quick cuts to convey action, each character having a base level of characterization, and a story that revolves around international espionage. What could have sent this movie over the edge is having an antagonist with an actual motive. The chief villain in this film is just a run of the mill terrorist leader with a total of four scenes, and for the most part he is rather unassuming. The flaws seem to have to fall on Kinberg. Coming off the dud Dark Phoenix, one would have hoped Kinberg would come back with a bang, but this is just as bland.

The 355 does have a bright spot, and that is the cast. The fact that viewers got a film with the ensemble cast of Jessica Chastain, Lupita Nyong’o, Penelope Cruz, Diane Kruger, Fan Bingbing, and Sebastian Stan is incredible. Even though they are not given too much to work with, they make the most of it. They all worked so well together in the final third act action sequence, and that is easily the best part of the movie.

The 355 is a lackluster film with an incredible cast. There is nothing from this movie that makes it stand apart from any of its action film counterparts, and the fact that they leave the end relatively open shows one of the issues with action movies today – an inability to stand on its own.