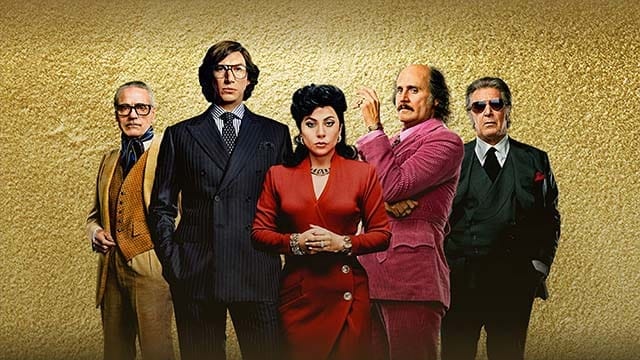 In House of Gucci, director Ridley Scott (Alien) leaves us wishing for a better film by telling the overly dramatic, Italian-dripped tale of the Gucci family in a most Lifetime movie-style way. Using Sara Gay Forden’s book, The House of Gucci: A Sensational Story of Murder, Madness, Glamour, and Greed screenwriters Becky Johnston and Roberto Bentivegna create the backbone tale of the murder of the former head of the Gucci fashion house, Maurizio Gucci (Adam Driver, The Last Duel) by his ex-wife, Patrizia Reggiani (Lady Gaga, A Star is Born).
The movie picks up the story around 1978 and by the end, it’s 1998, but divine Gaga and Driver never age or perceptibly change over the two decades. Driver offers us a delightfully and unexpectedly socially awkward Maurizio, which is the perfect catnip to Gaga’s confident yet modest Patrizia.
The heir was at first disowned by his father (Jeremy Irons, Die Hard) for marrying a lower-class girl, before being wooed back into the fold by his colorful uncle Aldo (Al Pacino, The Godfather), who sees Maurizio as having more potential to lead the family business than his image-obsessed son, Paolo (Jared Leto, Suicide Squad). The story begins briskly enough, as Patrizia clearly sets her sights on Maurizio, making his father’s suspicions that she’s “after your money, like they all are” appear not all that far-fetched. Once together, he’s happy as an outcast but she yearns for more, pressuring him to get back into the family’s good graces and eventually to push for greater control at the expense of his relatives, despite frequent reminders that her claim to the “Gucci” name comes by marriage, not blood.
House of Gucci starts with such promise as Adam Driver, Lady Gaga, and Al Pacino give performances that bring out the emotional complexity of the historically dysfunctional Gucci family. But then Ridley Scott becomes infatuated with tracking the fall of the corporation instead of zeroing in on the more compelling personal implosion of Patrizia and Maurizio. Patrizia is reduced to small appearances, which means her escalating to a place of murder is never contextualized outside of cartoonish fits of anger. And when the movie ends abruptly, the audience realizes there wasn’t any storytelling or drama, completely robbing it of any excitement.
So, if this story never lands, why care about the Guccis? Director Ridley Scott doesn’t seem to care about fashion; still, despite the over-the-top performances and plot twists he juggles, Scott drives his ultimate message home—that wealth is tempting yet poisonous. Everything in House of Gucci is over the top. The accents, performances, run time, and the greed. However, in spite of the absurdity and an insane story that just keeps getting more unbelievable, it is still watchable. But viewers shouldn’t feel guilty for throwing on their knock-off Gucci belts while attending the show, as their faux fashion will fit right into this bogus film.