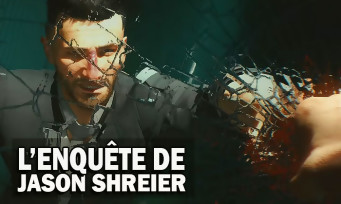 As we have known for a few weeks now, journalist Jason Shreier, renowned for his numerous investigations, investigations and other insides, was working on a dossier concerning the behind the scenes of the chaotic development of Cyberpunk 2077. He had tweeted it: many people working at CD Projekt Red were starting to talk to him, in order to reveal the back kitchen of one of the most anticipated games of 2020, and arguably the biggest launch fiasco of the last ten years. After weeks of collecting the testimony of some twenty employees working and having worked for the Polish studio, Jason Shreier therefore published his article, just three days after the video of an apology facing the camera from Marcin Iwiński, the co- founder and CEO of CD Projekt Red, who probably didn’t expect the Bloomberg journalist’s paper would pop up so quickly. 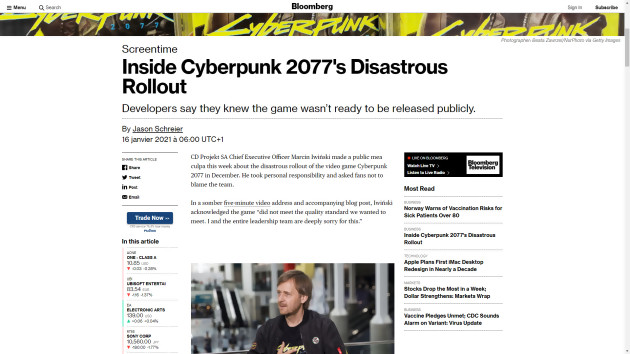 If overall, Jason Shreier’s investigation only confirms what was already being said in a low voice, it still sheds light on the process that led to such a disaster. A new way of working, and especially of behaving, which took effect following the global success of The Witcher 3. When the game was released on May 19, 2015, it was rolled out the red carpet. Specialized press like gamers, everyone is unanimous about the incredible quality of this Action-RPG which will allow CD Projekt Red studio to earn its stripes, and become this super-studio in which we can trust with our eyes closed. With the releases of the two solo expansions which will continue to make the studio shine on the international scene, the hype around CD Projekt Red has no limits, to the point of going public and becoming the most valued company in the whole of the world. Poland.

If The Witcher 3 remains the masterpiece of CD Projekt Red in the collective unconsciousness, we must not forget in what state the game was released at the time. Graphic downgrade, amounts of incredible bugs and framerate in the cabbage, the game will still benefit from a certain leniency on the part of the press and the players who will wait wisely for the release of the patches and numerous patches so that the experience is the most total. It is with this mindset that the leaders of CD Projekt Red will shape the development of Cyberpunk 2077, a game announced in May 2012 and whose first teaser will arrive in January 2013. In everyone’s mind, CD Projekt Red worked for 8 months to give birth to Cyberpunk 2077, with one naively imagining small teams at the start to ultimately become the game major of the entire development team. This is where Jason Shreier’s investigation becomes interesting, because we learn from the mouths of CD Projekt Red employees that development did not really start until the end of 2016, once the extensions of The Witcher 3 were finalized. Between 2012 and the end of 2016, the teams, still made up of 250 people, did not have the time to devote their day to working on Cyberpunk 2077. Deliver a game the size of Cyberpunk 2077 in 3 and a half years, knowing that the studio set off again on a brand new 3D engine, was obviously very presumptuous. Worse still, Adam Badowski who will take the direction of the project decides to make a total overhaul of the gameplay and the history of the game, by also imposing the first-person view, while the game was initially thought to be a Third Person Shooter. . This unexpected vision of Cyberpunk 2077 will cause many departures within the company, in disagreement with these editorial choices.

Another pretty crisp detail of Jason Shreier’s investigation: the famous hands-off demo of E3 2018, the one that will raise the Cyberpunk 2077 hype to its peak. At this time, no gameplay image of the game had been revealed and the developers had planned a 48-minute demo to impress the press and the various investors who could access this demo in behing closed-doors. The result of this demo was instantaneous: the journalists were talking about the best game of E3 at the end of the presentation and the hype began to take effect. Employees are unanimous: this E3 2018 demo was fake from start to finish, since the gameplay basics had not yet been finalized, some announced features had not been planned, such as ambushes in non-car scripted and the possibility of climbing the walls with the Mantis Blades, which then promised a certain verticality in the game and level design. Features that were officially removed in posts during the year 2019. For internal teams, this fake demo was an immerse waste of time and it would have been better to spend this time to develop the game.

Moreover, even if internally, the number of employees has doubled (500 people ultimately worked on Cyberpunk 2077), the days were exhausting and some employees talk about 13 hours of work per day for 5 days, with deadlines that seemed impossible to hold. When the first release date was officially announced, April 16, 2020, there was internal consternation, as it was physically impossible to meet such deadlines. As we know, the studio will postpone several times with the same discourse to want to improve the experience. Internally, memes and other gifs were created to have fun with release dates that were impossible to meet. To lighten the work of the developers, the management then takes the decision to reduce the map of the game, to remove certain gameplay features, but the disorganization in some departments will never allow to have a good workspace. 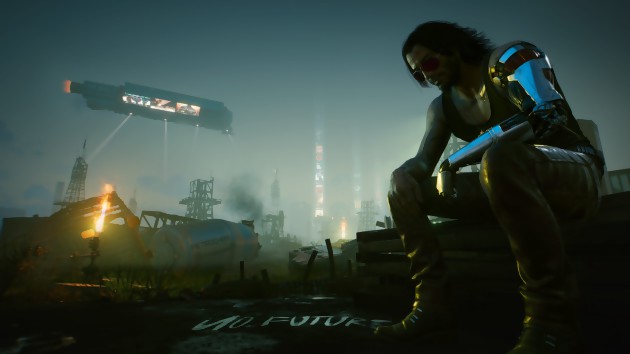 Shreier’s investigation also makes it possible to understand that the obsession of the leaders of CD Projekt Red is to achieve a level of quality in Rockstar games, the milestone to be reached when talking about open world. For the teams at CD Projekt Red, it was clearly impossible to compete with a team of 500 employees, when Rockstar called on more than 1,300 developers to deliver a Red Dead Redemption 2. The different departments have also sound the alarm bells to CD Projekt Red managers about technical issues with old gen consoles, but they didn’t want to hear anything. They had managed to do this for The Witcher 3, so there was no excuse not to repeat the feat with Cyberpunk 2077.

Very quickly, the gap grows between the goals and what is achievable. As if the managers of the studio had put blinders on each other, to the point that communication around the game is in total contradiction with what is happening internally. When a manager tweeted in January 2020 that the game was playable from start to finish, there was a misunderstanding on the part of the developers that they did not understand why the studio continues to lie to players. Likewise, during the mea culpa of January 13, Marcin Iwiński, the co-founder and CEO of CD Projekt Red, explains to us that some of the bugs encountered by the players never took place during the test sessions. Comments called into question by the testimonies which explain that most of the bugs were known, but that they were not corrected. Likewise, we learn that if the Police system in the game is so bad, it is because it was added at the last minute and the developers did not know whether to integrate it like in a GTA , or whether to think of it as an RPG. The Bloomberg article also tells us that flying cars were planned in the initial pitch, but the idea will be quickly abandoned given the magnitude of the task. 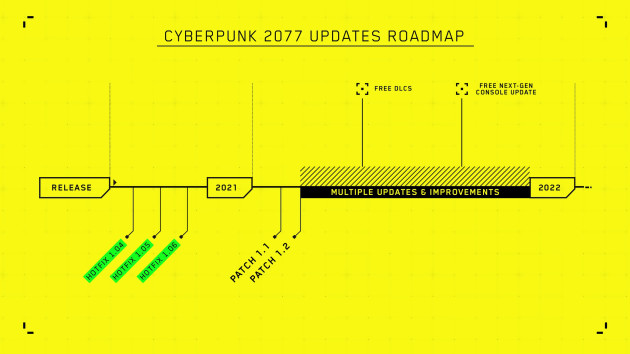 Among the employees speaking with their faces uncovered, Adrian Jakubiak expresses his dismay at the end result. Former audio programmer on Cyberpunk 2077, he will decide to leave the project which he explains to be too ambitious for the studio. “I knew it was not going to end well, but I did not know it would be so catastrophic” he says, before explaining that many developers have lost their families due to an almost daily crunch , when their salary sometimes did not exceed $ 400 / month. So many aspects that the general public was far from being aware, given the philosophy that CD Projekt Red has defended until now, sometimes to the point of lecturing others. As some say, it’s often the White Knights who wear the dirtiest armor …

In the meantime, it is rumored that internally efforts are being made to ensure that the game transforms over the fixes and patches that are expected in the coming weeks and months. The No Man’s Sky and Anthem examples are obviously taken into account by the leaders of CD Projekt Red who will try to do everything to regain the confidence of players and investors. But faced with such a debacle, one wonders if it is not already too late …