SNK vs Capcom: a new trailer to celebrate the release on Nintendo Switch 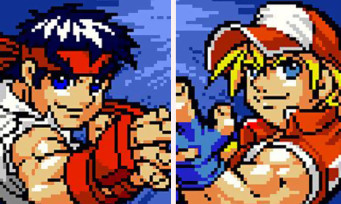 Still rumored a few weeks ago, the cross-over SNK vs Capcom: The Match of the Millenium is already available for download on the Nintendo Switch eShop. The opportunity to dive back into this fighting game released in 1999 on NeoGeo Pocket and which allowed the best fighters of the SNK team to face the characters of Capcom, but in Super Deformed format, the main DA of Neo Pocket games . In the release trailer that accompanies the brief, we can see the 26 characters perfectly, 13 for each side, and the possibility of facing Kyo Kusanagi and Ryu, Chun-Li against Mai Shiranui, Terry Bogard against Ken, or even Zangief. vs Haohmaru. Three game modes (Solo, Tag and by team) are expected, knowing that we can also try the Survival and Against the clock modes. The game is sold for € 7.99 on the eShop.