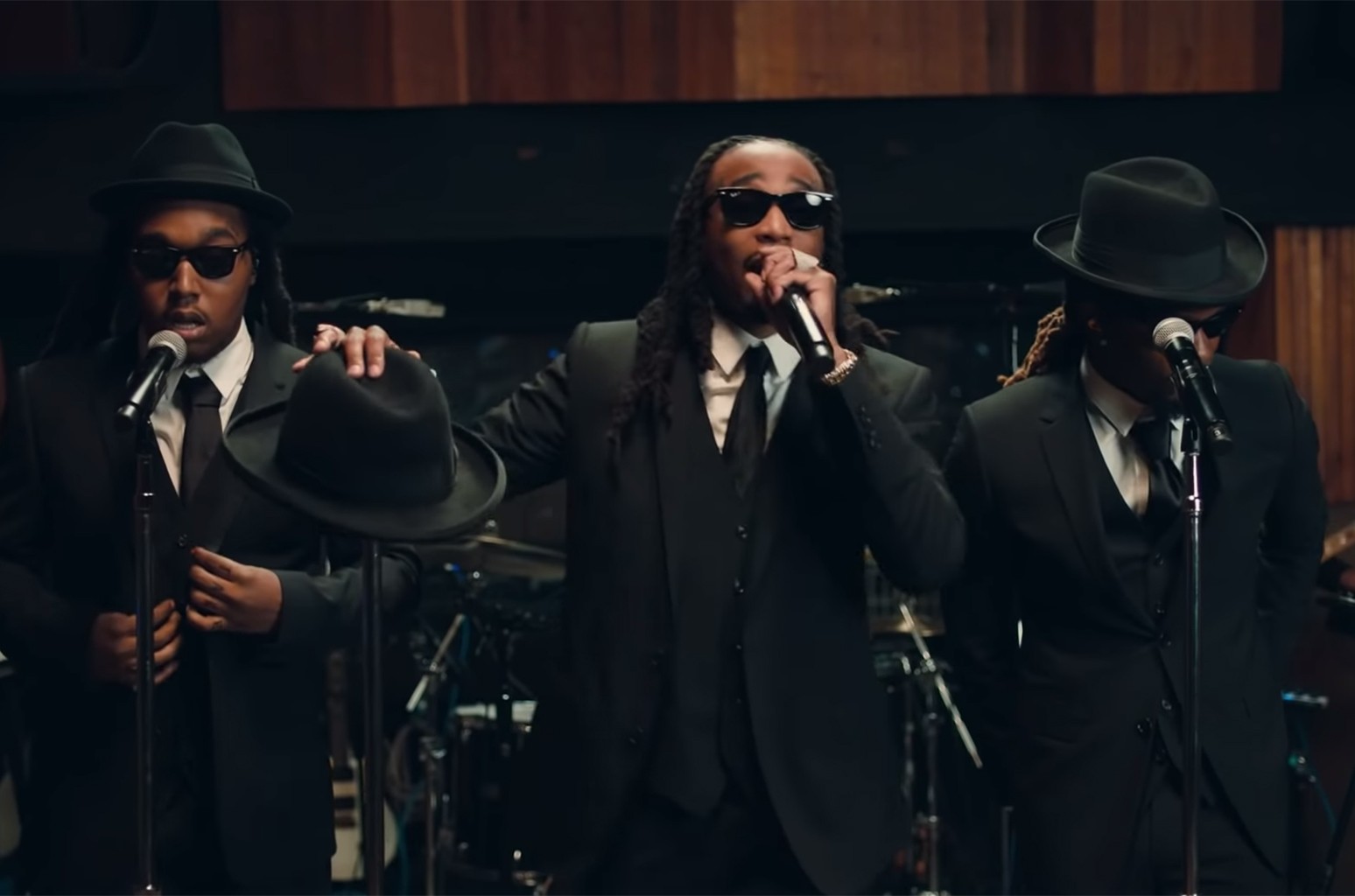 Migos’ Culture III is out now — and so is the all-new music video for their hit single, “Avalanche.” The track’s snazzy visual dropped Thursday (June 10) and the highly anticipated album debuted on Friday (June 11).

The “Avalanche” video opens with Migos’ Takeoff, Quavo and Offset rolling up to a recording studio in a vintage, cream-colored Rolls-Royce, wearing matching three-piece black suits and top hats. The trap trio then enters the studio where they seemingly record the tune in front of a live band.

Throughout the clip, the Migos talk about the album during what appears to be a fictional interview amid the recording session portrayal.

“How would I describe this album?” Offset begins. “It’s a level-up, you know what I’m saying, a masterpiece.”

Quavo kicks off the tune rapping about his childhood, when the young star-to-be was raised by his single mom, “Papa was a rollin’ stone, but now I got rollin’ stones in the bezel/ Mama at home all alone, hustlin’, tryna keep this s— together.” The Billboard chart-topper then says proudly, “If I go back to the past, my n—-s ain’t know we’d be rockin’ Coachella.”

In the next interview segment, the rapper explains his lyrics, saying, “The term ‘rolling stone’ related to me because we just felt like we’re the Rolling Stones, we’re the greatest group in the world, we’re the foundation to our families. We ain’t never had no pops so we feel like we are three fathers and we’re the big dogs.”

Offset swiftly picks up on verse two rapping, “I spend my mills on the crib/ Cover myself, F&N is my s—/ I spent a dime, go run you a drill/ If you do the time, come home to a mill.’” He later pays tribute to his grandma, saying, “Count your blessings, don’t worry ’bout the rivals/ Grandma told me, ‘Go read the Bible’/ Should’ve listened, still look at the sky, though.”

The camera then cuts back to the ongoing fictional interview, in which Offset says, “We just always challenge ourselves to be better and greater and to develop our sound. It’s been a long time coming, you know what I’m saying? We mastered the different flows. This project is going to be special to the culture.”

Moments after, Takeoff takes off with a smooth transition and groovy side-step to the microphone. He begins, “We been the n—-s that steppin’/ We came in the door and they takin’ the flow, call it repo’/ My dog, he gon’ bite, no Chico/ Get hit with the Draco and make him with Rico.”

He later makes a reference to the tune’s name in a catchy lyric, rapping, “Tell that boy go get a new phone/ Out in Bel-Air, copped a new home/ Avalanche with the blue stone.”

And speaking on the album during the music video, Takeoff says, “We missed y’all. I put my hard earned, we put our heart earned blood, you know what I’m saying, blood sweat and tears in that thing.”

Earlier this month, Offset opened up to Billboard about the making of Culture III ahead of its release.

“This is three years of creativity and sitting back, because we felt like the fans deserved that,” he said. “We didn’t want to make nobody upset, but our main thing was creating the best project we ever created. We gotta top Culture and Culture II and that’s not even about first-week sales. A lot of people get lost in that, but it’s about the creativity and the records and what they mean when you talk to me … We feel like we gonna lead the pack with this album.”

“It’s a big comeback,” Offset continued. “We want to show ’em that we back.”

Watch the video for “Avalanche” below: