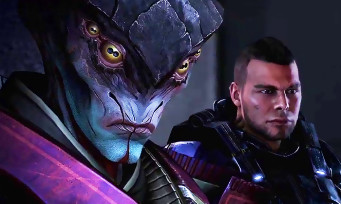 The information was revealed to us earlier today as a preamble to the publication of our preview of Mass Effect Legendary Edition and we can now share it with you: the remastered compilation of the first three episodes of Mass Effect will land on May 14, 2021 on PC, PS4 and Xbox One. The opportunity for Electronic Arts and BioWare to present us this new trailer which looks back on the content of this edition which includes everything that has been achieved on the three games, including DLC ​​(more than forty), except that the mode Mass Effect 3 multiplayer will not be in the game. Among the technical improvements planned, we are told a 4K display, HDR, while the framerate has not been indicated. This is the first episode that has benefited from a special treatment with a lot of work on the modeling of the characters, textures which have been enriched, better management of light and therefore shadows also, volumetric effects and cutscenes that have been revised and corrected. On the gameplay side, BioWare also promises us readjustments for this first episode, with improved controls for piloting the Mako, smoother camera movements and an AI of the allies which has apparently made progress. We wait to judge on documents and while waiting, you can read our preview which offers other crisp information on this Mass Effect Legendary Edition.