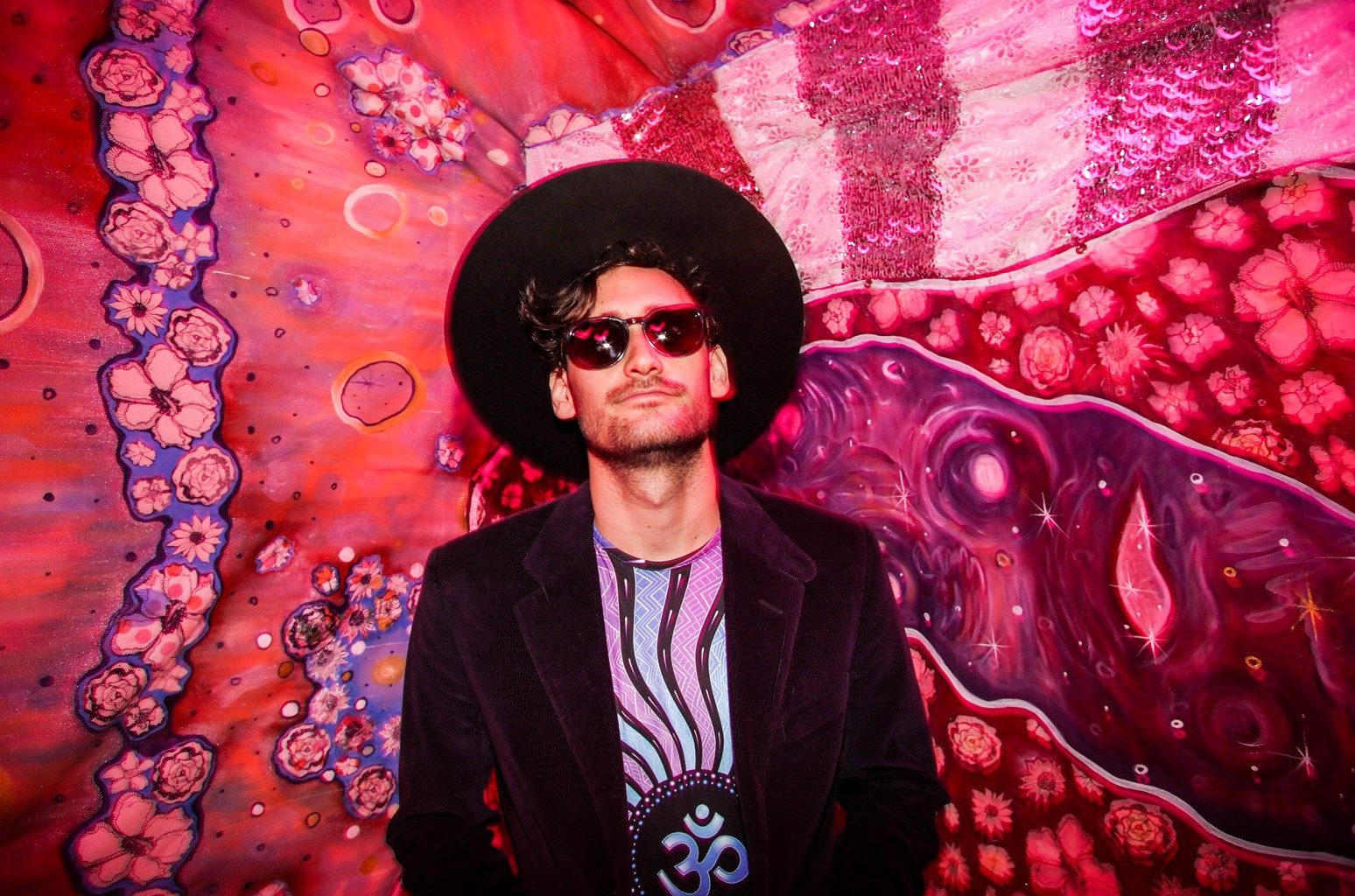 It’s unclear where Mikey Lion would be today if he hadn’t taken DMT in his dad’s backyard nine years ago. He was, he now estimates, roughly one minute into his trip when the trees — which had previously only represented yard work — started talking to him.

“Every single branch on every tree and every plant, everything was looking down on me going ‘Yes! Yes! Yes!’ with these huge s–t-eating grins,” he recalls.

Lion then realized that the 40-foot palm trees were not just talking, but talking about him. “I’m freaking out at this point,” he says, “because I’m on their level, and I can understand what they’re saying about me, and they’re saying, ‘How amazing is this that he finally understands that we’re just as alive as he is?’”

Talking over Zoom, the producer and cofounder of the SoCal-based Desert Hearts festival, record label and party brand calls this afternoon in the yard the most monumental experience of his life, one that awakened him to the existence of universal love and one that pushed him towards his career as a musician and event promoter as he’s quested to just give people the same feeling of connectedness and excitement that he experienced with those trees.

This might all sound like standard-issue West Coast woo-woo if it hadn’t also worked. In the past decade, the 32-year-old Lion, along with his three fellow Desert Hearts founders Porkchop, Lee Reynolds and Marbs, have turned the event into an international brand, with the group hosting its flagship spring festival in SoCal — along with a touring show, City Hearts, that’s brought the party to cities throughout the United States and further afield destinations like Brazil and Spain.

Lion has played prestige events, including EDC Las Vegas, Electric Forest, Dirtybird Campout and Miami’s Club Space, with he and the DH crew occupying a vibey sort of territory where the West Coast transformational festival scene meets the underground cool of house and techno.

This past Friday (June 4), Lion marked the beginning of what he calls a new era of his life and career with the release his debut LP, For The Love. The album is the 100th release on Desert Hearts Records, which has dropped music by each of the founders, core DH crew (Lubelski, Rybo, Sacha Robotti and more) and a flurry of other acts including producer/vocalist Anabel Englund and Berlin-based artist Andreas Hennenburg.

The nine-track album fully embraces the Desert Hearts commitment to house and techno, with the album shifting between squelchy heaters like “Burn With Me,” to the shimmering piano-laden progressive house of album opener “Above The Clouds” to the lushly experimental Justin Martin collab “Through the Fog.” (And yes, the soothing album closer “Talking to the Trees” is about that fated DMT trip.)

Lion test-drove much of this music during Desert Hearts’ recent, and fairly epic, run on Twitch, with the crew launching their channel roughly two weeks into the start of the pandemic. (“I thought we were getting in late,” he says.) The four Desert Hearts founders each picked a day of the week and then proceeded to livestream for 10-plus hours on that day for the better part of a year. It went better than they might have guessed when they were first setting up equipment in their living rooms.

“We’re coming out of the pandemic stronger than we were going into it,” Lion says of the DH fanbase’s expansion during the pandemic. “Because we never had this place where we could have all of our community and likeminded people hanging out five days a week on our channel.”

This success was largely a function of what Lion calls “making nice” with Twitch, as the group entered into a partnership for which the platform gave Desert Hearts money to produce content. With Twitch putting dance music at the forefront during the pandemic, as the genre helped gained major visibility for the streaming service, most Desert Hearts livestreams got mainpage placement on the site. As such, between 10,000-15,000 viewers tuned in for each stream.

“It was this crazy experience,” Lion says of these crowds. “There’d be the core Desert Hearts community of really nice people and an influx of gamers talking s–t.” With people partying to these streams from the privacy of their homes, Lion reports seeing wilder behavior in Zoom chat rooms than he ever has at any live set. “Every Wednesday it was like ‘Welcome to the Lion’s Den!’ And come 6:00 a.m. it’d be like, ‘Jesus, this is getting out of hand.’ But our fans were loving it.”

These streams weren’t just creating a reason to party, but generating the revenue that’s been key to Desert Hearts maintaining financial solvency through the pandemic. The company is typically funded by its April Desert Hearts festival, which was forced to cancel in 2020 and 2021. During the pandemic, Desert Hearts made roughly as much profit via donations and Twitch subscriptions (of which they hit a peak of 4,000) as they typically do from their IRL events. This revenue made it possible for Desert Hearts to keep the company funded and retain its four full time employees.

Lion says that Twitch viewership is down as the pandemic wanes and people get back to live shows. (Twitch also recently changed the way it presents electronic music, no longer giving main-page placement to the genre.) No bother, as he’s got a smattering of club shows on festival dates on a summer and fall schedule, with Desert Hearts also currently planning a fall City Hearts Tour. (The festival will return to SoCal next spring.) While his profile is rising, his one-time goal of being as big as global scene star Jamie Jones has been traded for a new purpose.

“My whole goal is to become the most effective healer with my music and the energy that I’m putting out there,” he says quite earnestly. “It’s not about selling tickets right now for me, but trying to help as many people as possible.”

As proof of concept, he then holds up a note passed to him by a stewardess while he was en route to a show last month and reads it aloud: “The last year has been tough for all of us, but one thing that has been a guiding light is yours and the whole Desert Hearts’ music. Thank you for choosing Delta, and continuing to spread positivity and healing vibes at your shows.”

He smiles, clearly moved by this sign that his plan is working. Those talking trees would certainly approve.