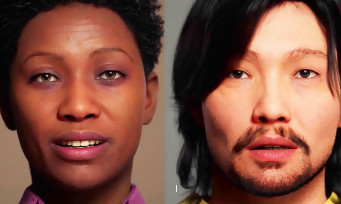 In the age of the PS5, Xbox Series X and RTX 3090s with ray-tracing technology, the race for photo-realistic graphics has been revived all the more. If the studios each have their own techniques for giving birth to more impressive visuals than the others, there is a software manufacturer that tries to make it easier for developers on a daily basis, namely Epic Games. If the publisher is now recognized worldwide for his Fortnite game, we must not forget that he is at the origin of the Unreal Engine, the ultimate video game creation tool. Still with a view to going further in its research, the American firm has set up a new tool, the MetaHuman Creator, which should make it possible to obtain startling results in terms of modeling the faces of 3D characters. A technology which is undoubtedly the most expensive today and which results in a difference in the gap between certain studios. It is no coincidence that at the top of the basket, we find Rockstar Games and Naughty Dog who have shown us their talent with Red Dead Redemption 2 and The Last of Us Part 2, because a significant budget must be allocated for the result is up to expectations and ambitions.

This is where Epic Games comes in and the acquisition of the 3Lateral studio in January 2019 makes perfect sense. At the origin in particular of the impressive trailer of Hellblade 2 with a photo-realistic treatment on the face of the main character, 3Lateral has become the specialist in the design of human 3D models, both in terms of precision in the textures, but also in the expression of the faces, more realistic than ever. Bought at the same time as his company 3Lateral, Vladimir Mastilovic is now part of the Epic Games staff, and is in charge of carrying out the MetaHuman Creator project to integrate it into the library of essential tools of the Unreal Engine, in particular its 5th iteration. Its main objective is to facilitate the work of creators by providing techniques that allow the first newbie to obtain convincing results. In fact, MetaHuman Creator will use the cloud and a web browser to generate its computing power, which it can then transpose into the Unreal Engine. History to make our mouth water, videos were presented to prove to us that within a few years, all games, even on a low budget, will be able to reach new heights in terms of visual rendering. We hope so.