Tales of Arise: already a million copies distributed in a week, it is a record for the series 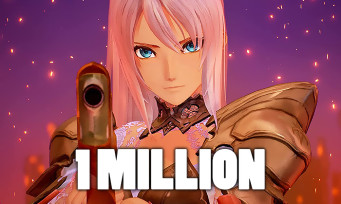 Released on September 10, Tales of Arise is already a popular success. Bandai Namco Entertainment has indeed just revealed the first sales figures, and after a single week, more than a million copies have already been sold worldwide. Be careful though, because it is specified that these are distributed copies and not actual sales, but this does not prevent the Japanese publisher from specifying that this is a record start for the series. . This almost unexpected success is undoubtedly the simultaneous release in the world, even if this episode also seems to have great qualities which have pushed players to massively buy day one. Bandai Namco Entertainment takes the opportunity to clarify that the saga now accounts for 25 million units sold in total since its creation. Could this be the start of some mainstream popularity for the franchise? Still, on Steam, we also recorded a connection record, with 60,000 players simultaneously.

Tales of Arise has been available since September 10 on PlayStation 4, PlayStation 5, Xbox One, Xbox Series X | S and PC, with a demo available as well.