Oddworld Soulstorm review: Abe looks better and fitter than ever!

Between an unfinished quintology and multiple ports, remakes and other HD remasters, the Oddworld saga may seem complicated to apprehend for a player who has not followed all of its developments since its appearance at the end of the 90s. Hey, Lorne Lanning decided a few years ago to start from scratch. This is how Oddworld: New ‘n’ Tasty !, a highly successful remake of Oddworld: Abe’s Odyssey, was released in 2014. Today Oddworld Soulstorm takes over, and we’ll see that this new episode goes far beyond a simple remake. 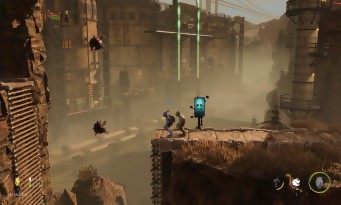 The second part of the quintology dreamed up by Lorne Lanning, Soulstorm directly follows on from New ‘n’ Tasty, just as Abe’s Exodus succeeded Abe’s Odyssey. Even if, here and there, some will speak of Soulstorm as a remake, this new episode is actually much more than that. Redesigned from A to Z, it even allows itself to rework the original scenario. Thus, the game opens with a series of press clippings presenting Glukkon Molluck as responsible for the fire in his own factory. Regular gamers know that this is really the aftermath of the actions of Abe, who freed 300 of his comrades from the clutches of an entrepreneur willing to literally sacrifice his workforce and turn it into canned meat. This scriptwriting taste continues with a real introductory cinematic, which sets the tone for the progress made in this area by the developers. The series has always offered high-quality cutscenes for their time, and this feature is once again answering the call. Some of these sequences are worthy of animated footage, with the facial expressions of the characters sufficient on their own to give a humorous or dramatic tone to the events. Each of these scenes is therefore a real small reward for the player, who will be able to benefit in all from more than an hour of happy viewing. 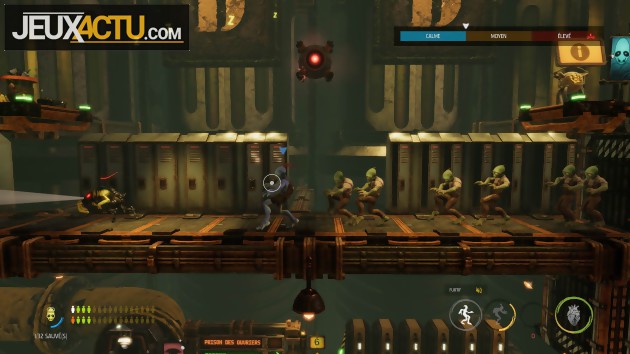 We will not reveal the details of the scenario here, but you can imagine that Abe will once again have to save as many of his fellows as possible. We therefore find the “gamespeak” system, which makes it possible to easily give simple orders (follow me / wait) to one of our disciples or to all those around us, in order to lead them safely to the portals. liberating birds, while using the passage of some of these faithful to activate a particular mechanism. The behavior of the Mudokons is generally very good, since they prove to be sufficiently “intelligent” to systematically reproduce Abe’s behavior. This will not prevent them from being crushed by a door or devoured by a more or less canine creature from time to time! After all, taking care of his followers is part of the player’s job. The spell, another mechanic inherited from the first Oddworlds, is also making a comeback. This ability allows you to take possession of certain enemies, and use them to open a passage or eliminate other opponents. 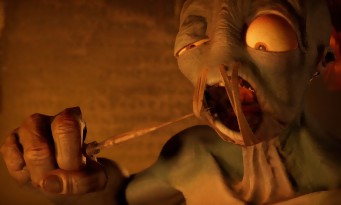 Oddworld Soulstorm also offers a good dose of infiltration, since it is possible to walk on tiptoes, so as not to wake up sleeping guards for example. The animation that follows is actually quite hilarious, especially when many followers automatically reproduce it. The same goes for the times when our disciples seek to hide in the surrounding cupboards in order to follow Abe’s example. Sheltering behind low walls (sometimes destructible) or hiding in swirls of smoke are among the “discreet actions” at our disposal. In addition, it is now possible to tie up a sleeping guard and / or search him to steal some items. The alert system uses three levels of vigilance (calm, medium, high) which are clearly indicated on the screen, knowing that a few seconds of hide and seek is usually enough for the guards to return to their initial round. 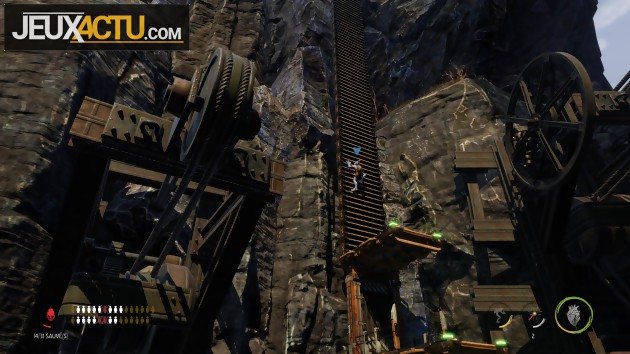 The platform aspect of the game is proving to be more enjoyable than ever. Abe has a handy double jump, automatically turns to the right side when climbing or descending a ledge, and even gives a valuable hint to the player by wobbling when they reach the edge of a platform. The rigidity of ’90s gameplay is a thing of the past. In addition, Soulstorm is innovating by now integrating an inventory and a craft component. Rummaging in jars, garbage cans, dumpsters and other cupboards allows you to obtain water bottles (to be sent into flames to extinguish them) or beer bottles (to be thrown on campfires to set wooden walls on fire. or burn enemies alive). But it is also possible to recover various components, necessary for the manufacture of mines, antidote, flare bombs and other smoke screens. This craft aspect is rather welcome, because it significantly enriches the gameplay without ever becoming too predominant. It even allows our disciples to be equipped with certain objects, which will use them or not depending on whether they are ordered to behave aggressively or passively (these two commands being added to the classic follow / wait duo). 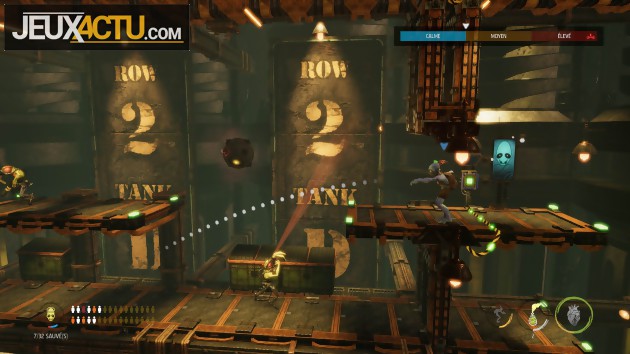 Technically, the game is obviously ditching 90s 2D and even upgrading New ‘n’ Tasty’s 2.5D. The developers are now talking about “2.9D”, a term a bit marketing but which still reflects a certain reality. The camera changes its positioning and zoom level regularly (sometimes very markedly), in order to play on the perspectives and to offer panoramas, angles of view and a feeling of gigantism that would not have been possible by “fixed” screens, whether 2D or 3D. If we are generally content to go left or right, which also makes it easier to get started, we still have the impression of evolving in a truly three-dimensional and “open” universe. This aspect works very well and goes hand in hand with overall satisfactory graphics. We can always notice here and there some effects less successful than others (certain explosions for example) or textures which lack a little detail, but the general impression remains very good. In any case, the artistic direction is so unique and pleasant that it takes precedence over the purely technical aspect. The game is not free from flaws, starting with the absence of French voices. Luckily localized captions answer the call, but some of them sometimes forget a few spaces between words. It’s not much, but it still looks bad, just like the little bugs that still have to be eradicated (body of an interlocutor frozen during an ingame “cinematic”, portal to birds that refuses to reappear…). 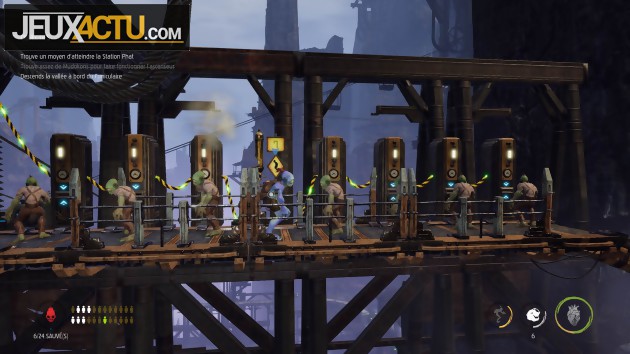 In addition, the selection system gets tangled up a bit when several actions are possible in the same place. We would like to be able to tie up an enemy before searching him (in order to avoid his waking up), but the game sometimes forces us the opposite, when it does not favor outright the opening of the closet located in the background. We were also surprised by some tutorial messages showing up in the fourth or fifth level, when the actions involved were already useful, if not necessary, in the previous levels. All this did not prevent us from sincerely appreciating the adventure, and from taking great pleasure in saving as many Mudokons as possible. There are more than 1300 to be released, and the game offers us more or less four endings (the “worst”, the “bad”, the “good” and a bonus sequence) according to the percentage of recovered followers. Another motivation to play the saviors: freeing at least 80% of the Mudokons in seven of the fifteen basic levels gives access to two additional levels. The lifespan thus exceeds a dozen hours, and can even be doubled if one seeks to unearth all the secret areas. In the end, Oddworld Soulstorm fulfills all its promises and therefore augurs well for the best for the future. Because yes, we hope to see one day the end of the quintology that was promised to us more than 20 years ago …