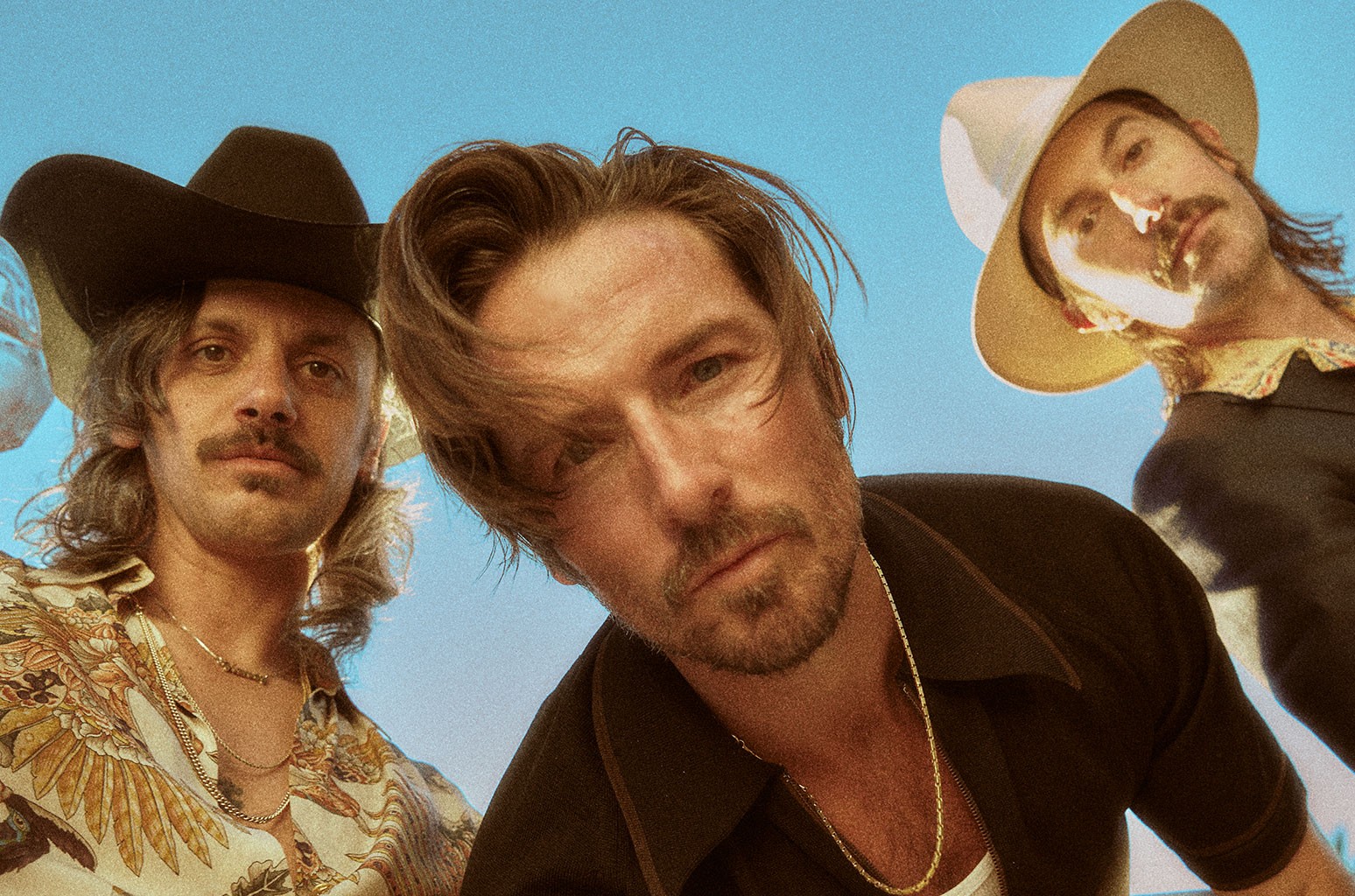 Like many acts, Midland’s Jess Carson, Cameron Duddy and Mark Wystrach found themselves with ample time off the road in 2020. Coming out of what Wystrach calls “the warp speed of 2017 through 2020,” and then seeing their road warrior ways abruptly halted due to the COVID-19 pandemic, the trio took stock of where they’ve been, and focused on shaping their next chapter.

Since releasing their debut album On the Rocks in 2017, Midland’s amalgam of ’70s country-rock song structures and tightly stacked harmonies — with a dose of country traditionalism thrown in for good measure — have brought the group two top five hits on Billboard’s Country Airplay chart (“Drinkin’ Problem” and “Burn Out”), a No. 1 country album (sophomore album Let It Roll), two Grammy nominations, and an Academy of Country Music Award win.

Midland takes another step forward in their sonic progression Friday as they release the five-song EP The Last Resort via Big Machine Records, marking their first project of new material in two years.

“At the very beginning of 2020, we were like, ‘Oh yeah, we’ve got the third album in the bag. It’s done.’ We had songs that we couldn’t fit on the second album. Writing for the second album was so strange, because we were in transit the whole time,” Duddy tells Billboard. But then the pandemic hit and those songs were replaced with new ones. “When we had to sit around for a year, we realized that the one thing that we truly loved to do was think about writing music and writing songs. We co-wrote probably 25 or 30 songs in the last year,” he continues.

The group reunited with producers Dann Huff, Shane McAnally and Josh Osborne. Carson penned the first release from the EP, “Sunrise Tells the Story,” with Jessi Alexander and Aaron Raitiere.

“That was a title that Jessi had,” Carson says. “I remember her saying she felt it could be a song about waking up after a party when maybe you’re hung over. I thought it could tell a little more of a serious story that was more open-ended. Maybe they end up married, you don’t know.”

The opener “And Then Some” delves into heartbreak, while electric guitars sizzle on “Two to Two Step,” a dancehall-ready romp written early in the pandemic and inspired by the band’s eagerness to return to the road.

“That was us having a little bit of optimism that we were going to be playing live shows soon,” Wystrach says. “That recording and arrangement is a straight tip of the hat to ZZ Top.”

“Take Her Off Your Hands” simmers down the honky-tonk scenario, as the song’s protagonist hopes to dance with a woman who is being ignored by her date.

“We were writing with acoustic guitars and that one somehow started as a George Strait song and in the studio, with that 12-string intro, it immediately started feeling like some Tom Petty or some Don Henley,” Wystrach says. “That’s the fun of it all, right? You can hear all of those influences, but it’s also the ability to make it our own sound.”

As Midland’s members fashioned the new EP, they simultaneously retraced their 2014 origin story when they recorded together at Sonic Ranch in Tornillo, Texas. In March, they released Midland: The Sonic Ranch Documentary with an accompanying soundtrack compiled from those early sessions.

Carson says, “Unearthing that Sonic Ranch stuff, we weren’t listening to that over the years, so it was very much a new discovery for us too. It is interesting how there is a through line, and a lot of the DNA of what we strive to accomplish was there in the Sonic Ranch recordings. It was more of a very loose version of a Rolling Stones harmony back then. We weren’t really picking notes. Two of us would just go in there and yell a harmony along with what Mark was singing.”

From the start, the visual component has been an integral element of Midland’s brand. The promotional rollout for The Last Resort expands that idea, including a stylized digital magazine touting the mythical Last Resort Hotel & Day Spa, and a full-fledged throwback “infomercial” created by Cameron and Collin Duddy, with Midland guitarist Luke Cutchen in a starring role.

“It’s been fun to amass a specific rollout, something that feels very world-building,” Duddy says. “We didn’t have the luxury to do that on the second album, because we were on tour. We were just in the explosive state of upward thrust from album one. I think historically, a lot of third albums tend to be this way. Typically, album one is you at your purest; album two, you’re on your back feet, and, if you have success, with album three you get to really plan your attack. We’re just applying everything we’ve learned over the years.”

“This infomercial has become all of our favorite part of this whole rollout,” Duddy adds. “At the end of the day, it’s really just us having fun. A lot of that had to do with putting out The Sonic Ranch and getting nostalgic about where we’ve come, and reconnecting as friends. So it all emanates from within.”

The group is mum on exactly where the photo shoots for The Last Resort & Spa promo material took place, but they stressed vibe over location. Duddy says, “We can’t reveal our secrets. It’s a bit of a magical place for everybody, without knowing where it’s at. Or they can figure it out, like we had to, on Pink Floyd albums and stuff from the ’70s.”

As the pandemic-induced drought of live shows ends, Carson estimates they have already played more than 20 shows so far this year. This fall, they are slated for several European dates before returning Stateside for The Last Resort Tour in October with opener Hailey Whitters. They are also on the bill for Stagecoach 2022 next April.

“We pride ourselves on being a touring band,” Wystrach says. “It almost feels like a country Grateful Dead, in a way. There are people that will follow us on tour, and they’ll hit every single show, just tailgating. I think it’s really important for them to have us back, and live music back.”

But first, the group will return to the studio in the next few weeks to flesh out the final six or seven songs that will extend The Last Resort EP into a full-length project for release later this year.

“We have a ton of songs and I believe in all of them,” Wystrach says. “They don’t always make the album, but that’s exciting because there is always the next album.”