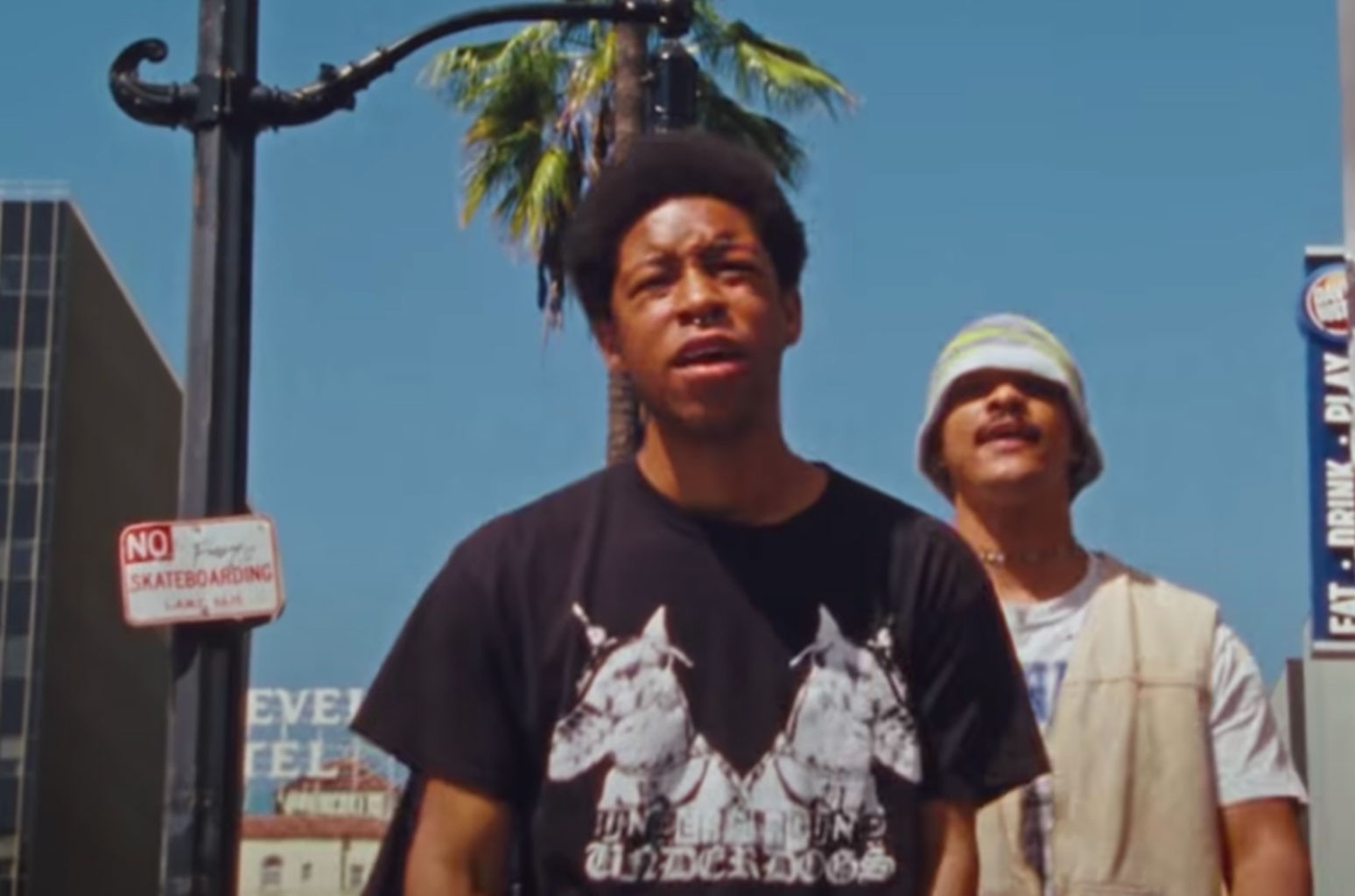 “Sorry, I’m kind of a superstar,” Kenneth La’ron, better known as the up-and-coming punk artist KennyHoopla, quips when his conversation with Billboard gets interrupted by his publicist telling him he has to hop onto another interview. He’s promoting his forthcoming mixtape Survivor’s Guilt, due today (June 11), and he’s used to press cycles by now; he’s done this enough times to the point where he knows how he stands with them: “I hate them,” the 23-year-old admits. “It’ll drive me insane.”

After growing up with a musical family and listening to “Changes” by 2Pac on a cassette tape every day upon coming home from elementary school, he developed an inevitably personal and colossal bond with rap and music in general. It only intensified as time went by and he got older and more conflicted about life. “All I knew was music,” he recalls. “You turn on something and it blocks out the voices in your head. There’s no room for anything else. Over time it becomes your go-to, and it’s like second nature.”

His appreciation for indie rock blossomed “probably in 7th grade,” he says. He’d already enjoyed commercial bands like All-American Rejects and Gym Class Heroes, but it was the more underground, idiosyncratic acts that struck him, specifically iconic early-2010s indie group The Drums. “Jonny Pierce, the lead singer, is my true idol. He’s someone I looked at and was like, man, his pants fit so nicely, I love the way he writes his songs, he puts it all out there and has this sense of longing in his music that I feel,” he raves. “I think that’s where it started.”

He started out working on his own music on SoundCloud, making rap songs with his friends and unleashing them onto the web just to see what would happen. Beneath the Willow Tree was his debut EP and it put him on the map; last year’s EP how will i rest in peace if i’m buried by a highway? furthered his influence, the catchy, Bloc Party-style title screamer becoming a popular alternative anthem, peaking at No. 8 on Billboard’s Alternative Airplay chart and notching 13.9 million U.S. streams to date, according to MRC Data. It was impressive for someone who never really learned how to play guitar — which he feels no shortage of guilt about, calling it “almost disrespectful to the genre.”

La’ron signed to the major label Arista Records in November of 2018, and quickly churned out collaborations with artists like Jesse Rutherford of The Neighbourhood, critically-acclaimed solo act grandson, and the emo-rap icon nothing,nowhere. Though he calls the experience of working with nothing,nowhere. “super dope,” he says that teaming up with a bunch of artists for songs wasn’t something he was necessarily thrilled about. “I hate doing collaborations honestly,” he says. “You know what it was? It was my label being like, ‘Oh we need to have a feature, we need to do a remix.’ I’m like, I don’t even wanna fuckin’ do that. I just wanna do me. I’m not in a rush to do all this stuff.”

Still, he allows that his own opinions on these matters are volatile. “This is just me being honest with you, and I might feel another way in like two hours — like a completely different way,” he explains. “But this is who I am now — and that’s why I hate interviews so much.”

As someone who creates art out of a spiritual necessity to do so, La’ron’s goals are often at odds with the industry people who surround him. “I grew up with, like, not s–t,” he explains. “When you come from what I come from, you meet people from all walks of life and I know how it feels to have nothing and I know what it means to make sure that you secure something for yourself. It’s easy to panic. I’m young and I’m in these rooms with bigger people, especially bigger people that don’t know where I come from which I struggle with a lot and they only care about money.”

With the world shut down and his own profile increasing, he says that struggle was exacerbated. “During the pandemic, because that’s apparently when I started becoming a bigger artist, my label would put me in all of these interviews and stuff and I was a small artist. I’m a Black artist and I make rock music and I’m easy to exploit and shit. People don’t even care; they just want content.” (La’ron later told Billboard that this and other comments in his earlier interview were “referring to media in general and not my label, more blogs / Instagram lives / press etc.,” explaining that he “felt [at the time like] click bait for people, because [of] this whole POC thing going on. Sometimes it felt like content for content’s sake, and they don’t see me for Kenny.” Arista could not be reached for official comment.)

For Survivor’s Guilt, he had more creative control, especially working alongside Travis Barker, who indulged his crazy work ethic. “Travis knows that I go insane,” he says with a laugh. “He gets it, so everything’s easier.” There are no features; it’s solely La’ron and Barker for all eight tracks. It’s an obvious departure from his lo-fi days, diving straight into a polished, bright landscape.

He’s hesitant to say how he feels about the mixtape yet; how he measures his personal success is the degree of effect his songs have on the culture, because that’s what drew him in about indie rock in the first place. “I have to keep making the best music that I can because that’s what matters the most to me — that when I die there are infectious anthems in music for people to live to and a new bar to be set for future generations.” It’s why he blends several different genres — pop-punk, new wave, rap, screamo — into his songs: “I aim to be universal and hit every target,” he explains.

La’ron reiterates his gratitude to have a spot in the music world at all, and that he welcomes all of the challenges that come his way, including the “dumbass industry politics and people being corny as f–k,” which is all too common and frustrating to an artist searching for sincerity. This new mixtape is genuine in its rejection of artsiness or pretentiousness; Survivor’s Guilt does what it wants as a mix of commercial and gritty sounds, riffing off of generic, Blink-182 style pop-punk contrasted against guttural, unsparing screams and dark breakdowns. “I hope people can hear the rawness in it,” he says.

It’s still only the beginning of La’ron’s career, but he knows what comes next. “I have to earn a place in the conversation,” he says about the music industry — specifically about speaking up against the exploitation and limitations that come with being an artist. When it comes to creating, he wants to learn more about making music technically, especially with playing guitar and producing.

“I’ve been praying and putting it into the universe that [Survivor’s Guilt] puts me in a very good place financially, and spiritually to the point where I can have the time to do what I want to do, and be in the place I want to be and I can sit down and feel comfortable and do this with my friends and chill and not have to be running around all over and meeting random people and just wasting time,” he says. “But we’ll see.”