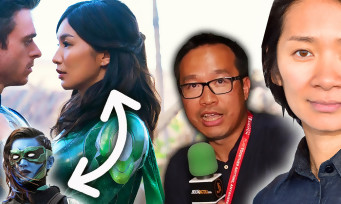 It was last November 2, the day before the release of Eternals in France, Chloé Zhao had made the trip to Paris to promote her new film, and the 26th of Marvel studios. Winner of an Oscar last April for her previous film Nomadland, the 39-year-old director is propelled to the front of the stage as part of the new breath that Kevin Feige (the boss of Marvel Studios) wants to bring within the MCU. With a different approach to the firm’s other productions, The Eternals divided the press a lot, to the point of even having obtained the lowest rating of any MCU movie, even behind the failed Thor 2. While the audience was won over. by the film and hoisted it to the top of the charts, we tried to understand why it was so shunned by the critics. Is it really justified? Did Chloe Zhao deliver a good superhero movie? Many questions that deserve to be analyzed. We also took advantage of Chloé Zhao’s presence in the French capital to ask her our questions, to find out if she had had carte blanche to stage Les Eternels, but also to understand why Gemma Chan had been re-cast to play Sirse / Circe in the movie, as she played Minn-Erva in Captain Marvel. At the same press conference, we also talked about his next film, a new adaptation of Dracula, with a vision half-western half-SF.