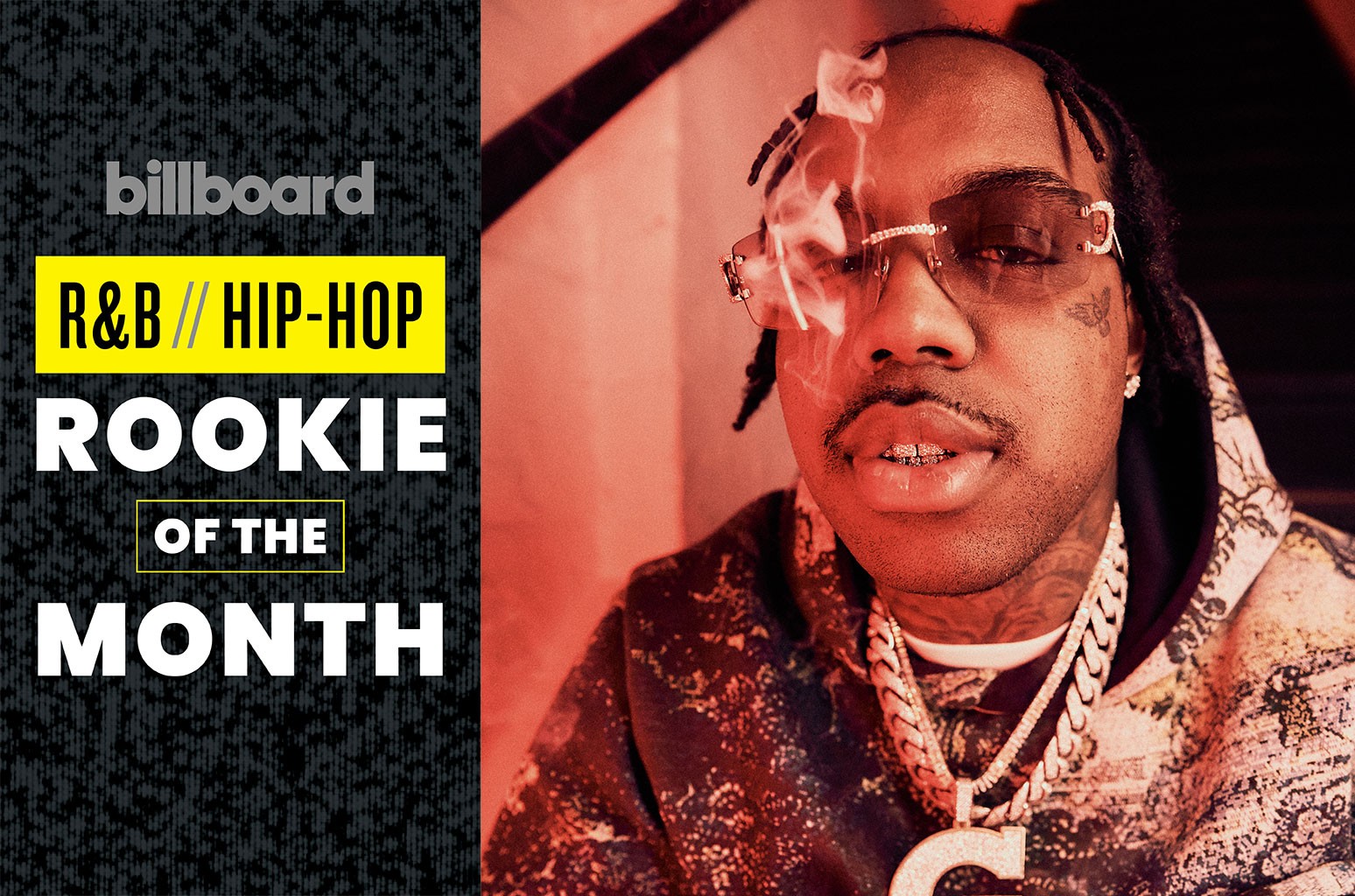 It’s a day after the 2021 BET Awards, and EST Gee is at Paramount Recording Studio in Los Angles, putting the finishing touches on his project Bigger Than Life or Death. Before he presses play, he takes a seat and opens up a mysterious black box.

Inside the case are various pieces of glittery jewelry, which he begins to meticulously study and try on before deciding whether or to wear them for his upcoming photo shoot. For the former football player turned rapper, it’s more than just trying on gaudy jewels and embracing his role as his CMG label’s prized gem.

“You can tell a kid is going to be exceptionally smart at two years old,” Gee says with a grin while trying on his watch. “I feel like people know it their whole life, if they got that ‘it factor.’ It could be good or bad. It don’t matter what you doing. Some people were chosen. I never been bad at nothing.”

Gee is right. When he was focused on football, he emerged as a high school standout and later a college star for Indiana State before trading in his cleats for a microphone. Gee then stomped his away into prominence in 2020, when he released his breakout mixtape, I Still Dun Feel Nothing.

Gee’s balance of harrowing storytelling and Louisville bravado spoke to hustlers who fancied being their neighborhood’s street king. Jay-Z, Yo Gotti and Lil Baby all professed their admiration of Gee and his lionhearted demeanor, perhaps because of his more-than-music attitude and brushes with darkness. The rapper lost his mother to Leukemia, and shortly after, his brother was murdered. Then, Gee, himself was shot four times during a music video shoot. These tragedies all occurred within a two-year span.

And while he wrestles with another piece of jewelry inside the studios, he pauses, and chalks up his losses succinctly: “I could still take some more, and it don’t matter.”

What does matter is that Gee’s story doesn’t end in heartbreak: in 2020, he landed a deal with Yo Gotti’s CMG after Lil Baby tirelessly recruited him to join Quality Control. Though Gee sided with Gotti, he and Baby remained friends. This year, they collaborated on records including Baby’s “Real As It Gets” and the smoldering “5500 Degrees,” which was included on Gee’s just-released Bigger Than Life or Death project.

Billboard caught up with July’s R&B/Hip-Hop Rookie of the Month discuss his breakout year, his relationship to Louisville, and Jay-Z’s influence.

What street principles do you think you’ve maintained as a rapper?

Nothing. This s–t is WWE. The people who tell you “this s–t is what it is” never did nothing. They make the playlists but never did nothing. They tell you what street music is but they not part of the streets. It’s WWE. A lot of rappers just look good and sound good — it’s not like that. It’s s–t you ain’t even got to say. The energy is undeniable. That’s how you feel [about] me way across the country and I’m in Kentucky.

Can you talk about wanting to work with Lil Baby and Yo Gotti on a bigger scale.

If it was somebody else that wasn’t with Gotti, they would be a bigger artist. A lot of his artists be working. A regular label, if they had a lineup like Gotti, they’d be happy with that. Gotti is a smart businessman. Lil Baby is just like me. So that force [is to be] natural and be yourself.

I know Quality Control was trying to bring you in, but that loyalty to Yo Gotti made you want to stay with him.

I was with Yo Gotti first. You got to know yourself and make sure you’re right. I knew I’ve been wrong a lot of times, so this is simple s–t. Money’s gotta be right and I might need that coin.

You were shot five times, and you lost your mom and brother. Then, you came with these mixtapes and rapped about not feeling anything. How are you numb to adversity?

You and Jack Harlow are two different people with contrasting styles out of Louisville. What similarities do you see between you two?

We got pure heart and soul. I ain’t never hated on no n—a. Jack don’t hate. If it’s good, it’s good. I feel like I know music. Any genre of music I know. If I heard music, I can tell if it’s a good song even outside rapping. I actually be listening to other s–t.

What attracts you to listen to other artists?

The mystery and if the interpretation is open, then I can apply it to myself. He could be talking like The Weeknd.  The way he talking about his s–t, I know he’s going through his s–t with white girls, models sniffing cocaine, but the way he puts it, my business is in it. These neighborhood b—–s be on the same type of s–t. The music is so good, no matter where I’m at with it, I can feel it. I feel like that’s special and I like listening to artists that can do s–t like that and not just locked in one type of s–t. I feel like that helps me.

A lot of rappers don’t wanna listen to anybody else.

I’m gonna do me. It don’t really matter and I hear my voice in my head when I put s–t together. When I first started rapping, I just hear their s–t when I write my s–t, but it don’t be like that no more.

Were you nervous doing late-night television?

So even when Jay-Z calls you like he did before, you’re not nervous?

It was something, but s–t, I don’t know. It was regular. It’s enough for us and them. Make sure your people are straight. You just gotta remember who you are. I respected it, he’s a street n—a. He’s got a billion dollars. I can tell he don’t even think about it like that, “Man, I’m Jay-Z.”

He just be like,  “I can’t believe they let me do it like that.” That’s how I think, “How they let me get right here?” A lot of s–t be going on but it be whatever. It’s nothing they could do. It’s gone so far and you gotta know where I’m from. N—-s trade everything for this s–t. I know they watch my Instagram like, “What the f–k?” I know it bothers n—-s, and there’s hate with the love. Every day we come back to the same spot, and then one day I don’t come back, then everyone’s talking about, “You see what Gee just did?” I know n—s feel a way, but what can you do? It got to go far, it can’t be in between. When I do something, every n—a with me do something. The tree branch extends so far. I feel like the streets love me for real. A n—a know what I’m on, we just gon’ have to bump into each other.

We not doing that. We in a dream right now. This s–t is fake and out of the asscrack of the country. You can’t even go here as a tourist. It ain’t that type of city. Crime and sports, and it’s college sports. We don’t get to see the Benz. N—-s be good rappers, basketball and football players, painters, but n—-s just get stuck, because I don’t know what it is about my city.

It’s like a sinkhole. Even if you hate me, you gotta acknowledge it. I know they used to walk the back trail and going to the chicken spots and shooting through it. I seen them gambling and shooting jumpers every day. If you a young n—a in Louisville, you tried to play sports at some point in your life. We got two private schools and they might pull up to pay for your school and this is big money s–t for low-level sports.

But you made it out.

It be the only way out. If you miss that, then it’s the streets. It goes to the extreme real fast. Louisville is just a tough place.

You’re a special kind of brother right now. Do you feel like now you could say, “I’m that special cat that got Louisville on the map?”

Jack and [Bryson Tiller] were totally different. Jack got a different type of rap and [Bryson Tiller] is a singer. So much good s–t happen, but you don’t want to jinx it and everyone gets their hopes up. I feel like now I’m finally getting to the point that I’m right there.

If you could pick one word to title this chapter in your life, what would that be and why?

Give me three words. “I told you.” I’m the realest. I told you. Like I always appreciated my critical thinking skills my whole life. I just felt like everything was so simple but I couldn’t prove it though because n—-s was broke. When I first figured out we didn’t have no money, I was coming home from school like, “This ain’t even mine. This ain’t even my mommy and daddy. My daddy probably [somewhere].” I was like, “Hell no, I’m leaving and I ain’t never coming back.” I knew I was supposed to do something.

Were you somewhere else specific when you were like, “I’m here now, I made it”?

You made your six-year-old self proud.

They thought I wasn’t gonna be nothing, but it was so easy for it to be nothing. For it to turn into something, I feel like it ain’t hit me yet. This ain’t where I wanna be yet. I’m tryna get uncomfortable, like how Jay-Z makes people feel uncomfortable. I’m tryna make people feel like that. If you see me, you’ll wait to see what I say first. I know I got more stuff to do and everything is happening naturally. I don’t feel afraid of failure for once. I always thought about failure, but then I be like, “F–k it!”

I don’t even be thinking if something bad happens now [because] we got so much good s–t going on. It don’t work like that. S–t don’t line up that’s good for people just for something bad to happen. I mean, it could, but even if it did, then I’d respect it. S–t, this is far for me. N—-s have goals to buy their mom a house, but I’ll never get to do that. I’m just here waiting on my kids to grow up, so I can see what they want or make sure my n—-s got what they want. I don’t know, I’m just in a space that’s tryna see what’s next.