Dr Strange 2: horror and gore in the MCU thanks to Sam Raimi, our film critic 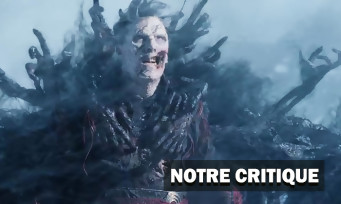 Let’s be honest, since the end of Avengers Endgame, Marvel Studios has struggled to renew the departure of its best superheroes, and moving on after the Thanos era is bound to be complicated. So of course, you have to learn to reintroduce new characters, and Marvel Studios takes its time to develop each of them, and that’s something you can’t take away from them. On the other hand, with the arrival – and the explosion – of Disney+, it’s a bit like the race for the industrialization of the MCU, with series that are hastily developed (Hawkeye, Loki, Moon Knight) and which disappoint more than they delight us. In truth, apart from Shang-Chi who was a nice surprise and the real breath of fresh air with this heritage of Hong Kong films that we couldn’t even imagine in our wildest dreams, we can’t say that the Phase 4 is really captivating. Even Spider-Man No Way Home failed, especially in its purpose, because apart from the presence of Tobey Maguire and Andrew Garfield, we cannot say that the multiverse was exploited correctly. It was developed above all under the prism of easy fan service, without any scriptwriting or staging ambition. So yes, commercially, the film was a global hit, with almost 1.9 billion dollars at the box office and more than 7 million admissions in France, we can only bow to such popularity. But let’s be realistic 2 min, the real first MCU film that transports us to the Multiverse is indeed Dr Strange in the Multiverse of Madness, also because we took care to write a solid and at least coherent script.

But what we must obviously remember from this Dr Strange 2 is its realization that we owe to Sam Raimi, known for the Spider-Man trilogy with Tobey Maguire, but that moviegoers appreciate for his horror cinema . And it is true that since Spider-Man, Sam Raimi has been discreet. There was Drag me to Hell in 2009 then The Fantastic World of Oz in 2013, but for 10 years nothing. Precisely, his return behind the camera, he will do it thanks to Marvel which gave him the possibility of reconnecting with the cinema of superheroes that many expected. So we don’t know how free Sam Raimi was to do what he wanted, because we remind you that there were several months of reshoots (from October to December 2021) and rumors that affirmed that the film was rewritten because it was deemed too gory for Disney’s specifications. Despite everything, the result still lives up to our expectations. By the way, small aside: if you are used to taking your children to the cinema to see Marvel, be careful all the same, because the film has been rated PG-13 in the USA, i.e. not recommended for children under 13 and on our side, we do not recommend it for children under 10/12 years old. Indeed, the film includes the disintegration of individuals, rather wild deaths, decomposing bodies filmed in close-up and also some jump-scares. In short, it is according to the sensitivity of your children.

Otherwise, where we recognize the touch of Sam Raimi, it is both in his camera placements, often ingenious, but also in this horrific aspect that he and Marvel do not hesitate to put forward during press conferences and other interviews. And that’s what interested him in coming back to superhero cinema, the possibility of integrating what he particularly likes. And as everyone knows, when we talk about horror cinema, you inexorably need deaths, and you are going to have deaths in this Dr Strange 2, and not only random characters, but also important protagonists who will be killed , because it is above all about variants of different universes. That’s what’s interesting with the multiverse, is that Marvel can finally have fun and relax. Speaking of gore heritage and horror movie, Dr Strange 2 also surprises in its visual, very graphic, but also very gothic in its approach and its images. Here again, as we are immersed in a Multiverse story, Sam Raimi can have fun and offer us settings as diverse as they are varied. We go from a classic New York to a totally futuristic New York, very eco-friendly in its architecture, to more mystical, more Gothic, more frightening worlds, especially in collapsing worlds. There is a real identity and that is nice to see. Because it’s a reproach that we have often made of MCU films lately, the lack of identity, films that are too smooth, the absence of risk taking. For once, this Dr Strange 2 dares everything!

The other big strength of the film is its pace. The film lasts 2h06 (and not 2h28 as we have seen on some technical sheets), and even if we are the type to greatly appreciate films that last, the fact of having returned to a 2h structure, it allows us to ‘get to the point. You never get bored in the film and above all, Sam Raimi has managed to find a very good balance between the action scenes, the challenges to be posed, the characters to be developed and the big surprises. And this is also the time when it is time to move on to the spoiler part.

Well, now that we are among good people, we will be able to develop the most interesting subjects of the film. Again, if you’ve seen our theories videos on the film these last words; know that all has proved to be right. Certainly the Superior Iron Man with Tom Cruise is unfortunately not present despite all the clues, and yet we believed in it until the end, even hoping to see him in one of the post-credits scenes. There are 2 moreover and one of them is more important than the other, since it introduces the character of Clea who is embodied by Chalize Theron. In the comic-book, she is Dormammu’s niece and she is part of the Defenders team. Moreover, as the film refers to the Dr. Strange Defender that we see at the beginning of the film, it is quite logical to see that Marvel will develop this aspect in the next films. Besides, there will be a 3rd Dr Strange which was confirmed at the end of the movie.

No, what is nice and ballsy from Marvel with Dr Strange in the Multiverse of Madness is to have made Wanda, or rather Scarlet Witch, the real antagonist of the film. As the trailer and the end of WandaVision predicted, Wanda Maximoff has completely misled herself with the Darkhold and this revenge she wants to have on life, by trying to recover her children, allows the character to gain maturity and understand how ultra-powerful she has become. Besides, Dr. Strange says it at one point when he comes to get her to ask for help that she is now the most powerful of the Avengers. And this power, we become aware of it very quickly, from the start of the film, when she reveals her intentions and threatens Dr. Strange, then destroys Kamar-Taj almost with the back of her hand. We really understand that she has twisted when she starts killing other wizards without any mercy, and we really like the representation that was in the film, with a costume of a darker red, a darker look and especially fingers stained with black, the famous oil black of the damned that the Darkhold represents.

When we see that she stuffs herself with all the wizards of Kamar-Taj in a few minutes, but also that she smashes all the Illuminati in a few minutes, we realize that the only way to stop her is for Dr. Strange also immerses his mind in the Darkhold, or else in the Book of Vishanti which is its anti-thesis but that its sudden destruction will make us understand that he will have to go through the dark side of the force. And that’s obviously what makes things more interesting. How will he not be like all the other Dr Strange who have all been corrupted by the Darkhold in other universes? By using what is called a dream-bridge which consists of taking control of another him in another universe and making a puppet of him. I find it super clever and especially super well found in terms of travel in the multiverse.

And the fact that we discover another facet of Wanda in Scarlet Switch, it also allows Eizabeth Olsen to show us the full extent of her talent as an actress, who I find does very well in all that is dramatic. There’s something serious and naturally melancholic about her face, I don’t know, I like it.

We’re going to talk about the Illuminati now, which was rumored, then theorized, and towards the end of the movie promo, which was confirmed by Marvel. The MCU does not include all the members of the Comic-Books, but there are some in common such as Professor Xavier played by Patrick Stewart, Black Bolt (or Black Arrow in VF) with his supersonic power which allows him to disintegrate everything with the sound of his voice), Mr Fantastic who is well and truly played by John Krazinki, whom fans have requested so much on the Internet, Captain Marvel in his Maria Rambaud version, Captain America variant Peggy Carter who is moreover equipped with reactors in his back and finally Mordo who therefore takes the place of Dr Strange because dead in this universe. So no Iron Man like in the comics while we see Ultron robots and no Namor either, that’s where the MCU differs from the comic books.

The fight is undoubtedly one of the most enjoyable of the film, but remains quite limited because to show us the omnipotence of Scarlet Witch, they decided to kill the two men very quickly: Mr Fantastic and Black Bolt. Black Bolt’s death is also really well thought out, with his skull imploding from the inside after Wanda made him shut his mouth. As for Richard Reeds, I’m quite disappointed that we can’t see his powers and after Miss Marvel’s power change for holograms, I’m afraid Marvel doesn’t know how to do the special effects of the arms that lengthen, it will be complicated for the reboot.

In short, all that to say that it is the women who stand up to Scarlet Witch and the fight is not only dynamic but there is also a feeling of power that emerges, it’s nice to see. Special mention also to the mind game scene between Wanda and Professor Xavier, with a super classy staging on a white background where we see the red threat coming up in smoke and allowing Wanda to bust Professor Xavier’s neck. It’s both shocking and satisfying.

In short, I could go on talking to you about this film for hours, but the best thing is that you go see it, because you have to go see it! A Marvel with a real identity, that of Sam Raimi, which offers us horror and gore, a Marvel which takes risks, which surprises with this Scarlet Witch who becomes the villain of the film and a super interesting Multiverse to discover. Here’s hoping Marvel continues to exploit it smartly and it’s not just a passing fancy for just a few movies. Run to see it and come back to give me your opinion under this video, I want to know what you thought of it.