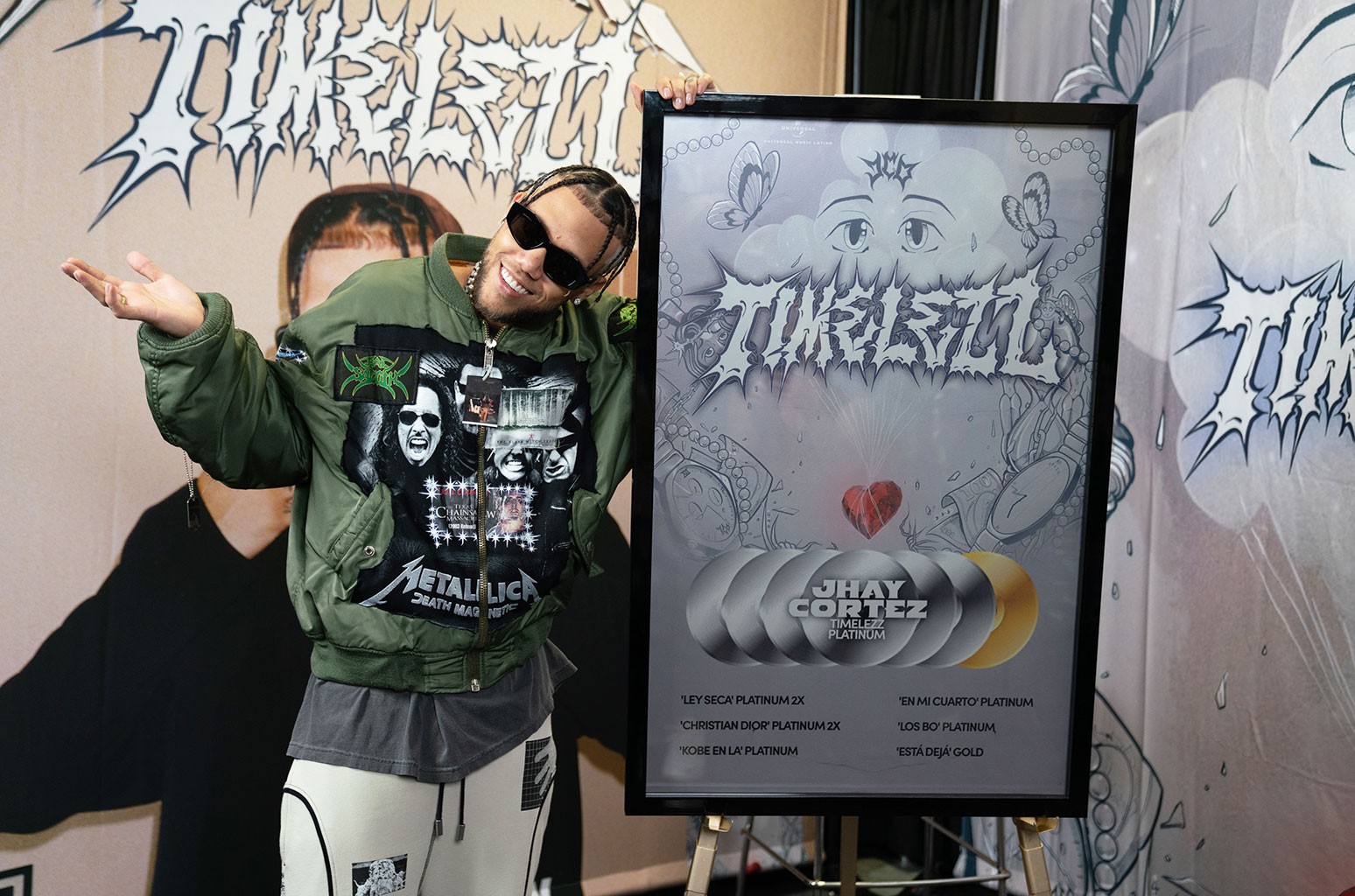 After three sold-out nights at the iconic Coliseo de Puerto Rico — with over 45,000 people in attendance across all three shows — Universal Music presented Jhay Cortez with a special plaque that recognized his last set, Timelezz, as a now RIAA-certified platinum album. Featuring 17 tracks that go from hardcore reggaetón to dance to house, the album peaked at No. 2 on Billboard’s Top Latin Albums chart on Sept. 17.

The three concerts in his native Puerto Rico included surprise performances by Wisin, Arcángel, Jhay wheeler, Sech and Bad Bunny, who joined Cortez to perform their smash hit “Dákiti.” “Thank you for being part of these historic nights,” he said during one of the shows. “Puerto Rico, it feels good to be part of the new generation of Puerto Rican artists. Thank you. From the bottom of my heart, thank you.”

Camilo and Evaluna performed their latest collaboration “Índigo” during The Tonight Show With Jimmy Fallon on Friday (Nov. 5), marking the television debut for their song. The track, which takes the name of the couple’s fist baby scored Evaluna her first top 10 on The Latin Pop Airplay. On Oct. 13, the pair revealed they are expecting their first baby together making the sweet announcement via the music video for “Índigo” where they learn that Evaluna is pregnant and share the news with their family and friends.

Watch their performance below:

Set for Dec. 18-19 at the Miami-Dade County Fair and Expo, Vibra Urbana announced their full Miami 2021 lineup. The list of names includes artists such as Cazzu, El Alfa, Farina and Lyanno, among others, who join previously announced performers including Sech, Don Omar, Anuel AA, Rauw Alejandro and Nio Garcia. The Miami event follows the fest in Orlando, which took place over the summer. The inaugural sold-out festival was held in Feb. 2020 at the Watsco Center at the University of Miami. See the complete lineup for Miami’s fest below.

Rosalía announced her new album will drop in 2022. The Spanish star took to social media to announce her forthcoming set is “coming soon,” and Billboard has confirmed it will be titled Motomami. Set to follow her 2018 Latin Grammy-winning El Mal Querer, the album announcement was accompanied by a 15-second montage with quick shots of Rosalía strutting in a cutout one-piece paired with black-studded heels and, in another look, covered in butterflies and glitter as she chants the phrase “Motomami” over a bass thump.

For Yankee, who was raised in Santurce, this new career move hits home. “I know what it means to a kid, I’m a product of the little league and grew up going to the Cangrejeros games at the Hiram Bithorn,” he exclusively tells Billboard. “ I’m part of something that I’m really passionate about and that’s baseball.”