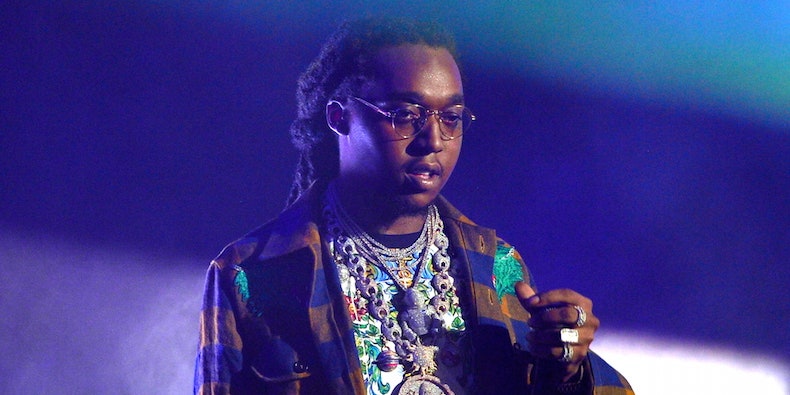 Migos rapper Takeoff is being sued for sexual battery, assault, and emotional distress, TMZ reports. According to TMZ, as well as The New York Times and The Blast, the woman suing Takeoff claims that he raped her at a house party in Los Angeles in June. Following the initial news of the lawsuit, Takeoff’s attorney issued a statement denying its claims to TMZ on behalf of the rapper. Find it below.

According to The Times, the woman (identified as Jane Doe) said she was invited to the house party by DJ Durel, who tours with the Migos. The woman’s lawyer Neama Rahmani told The Times that his client believed she was meeting Durel for a date. At the party, Takeoff reportedly showed interest in the woman and made her uncomfortable. The woman reportedly told DJ Durel that she was uncomfortable, and he took her up to a bedroom where she sat on a bed.

According to the lawsuit, Takeoff entered the bedroom and “began touching her buttocks,” The Blast reports. Also in the lawsuit, the woman alleges that she made clear to Takeoff she did not want to have sex with him, but he allegedly “grabbed her, flipped her over face-down, and pulled down her clothing,” and “proceeded to have forceful sexual intercourse with her from behind, without her consent,” according to The Blast.

After the alleged assault, the woman reportedly went to the hospital where “hospital staff observed evidence of a forceful rape,” according to the lawsuit. The woman also notified the Los Angeles Police Department, who opened an investigation, according to The New York Times.

We have reviewed the allegations and have similarly done our own due diligence. What has become abundantly clear is that the allegations made against Takeoff are patently and provably false. The claims and statements made regarding this lawsuit indicate that the plaintiffs’ representatives have not spoken with relevant witnesses or reviewed available evidence.

Takeoff is renowned for his artistic talent as well as his quiet, reserved and peaceful personality. In this instance, those known personality traits have made him a target of an obvious exploitative money grab. As his counsel, we are well aware and well versed on the importance of civil and criminal prosecution of true sexual assaults. This is not one of those situations.

If you or someone you know has been affected by sexual assault, we encourage you to reach out for support: