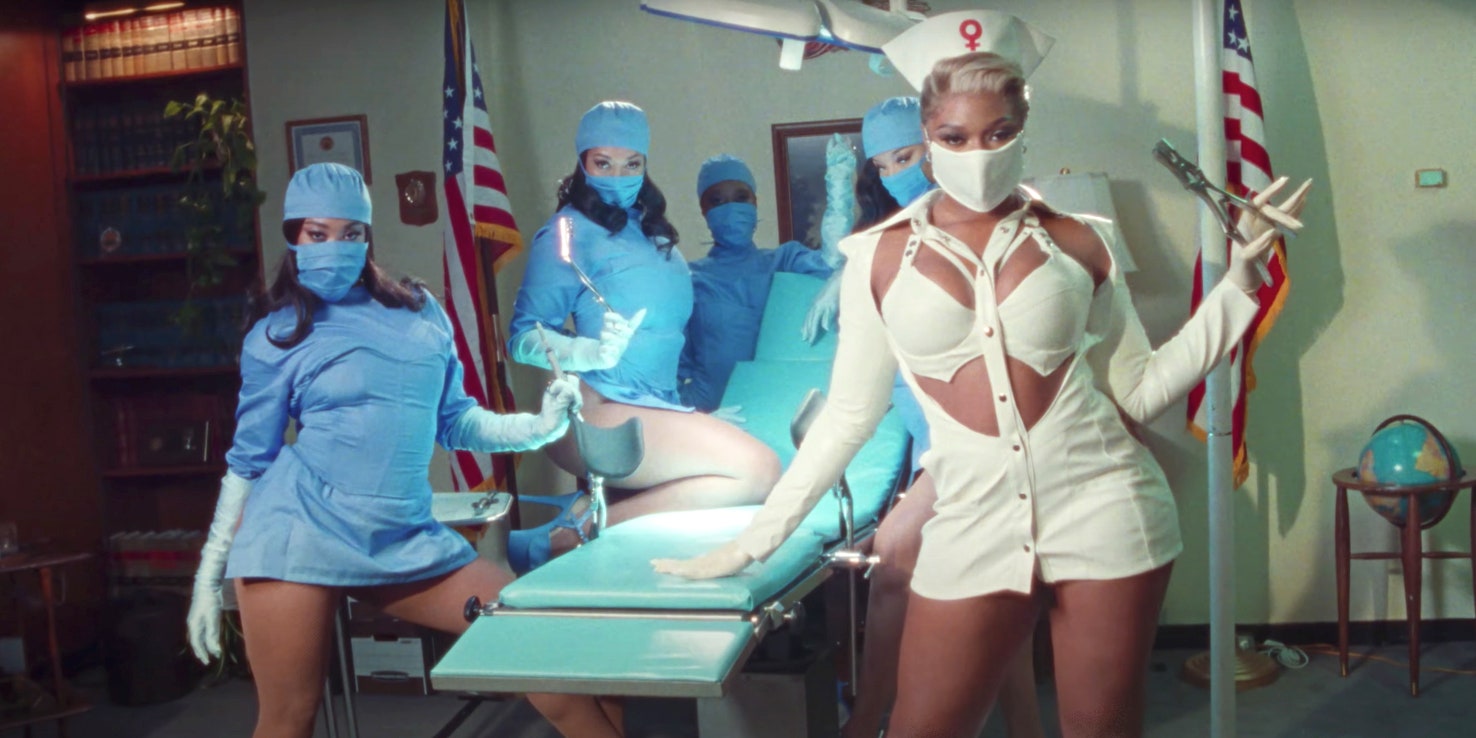 Megan Thee Stallion is staring down her third consecutive Hot Girl Summer—a streak recertified this week with her new single “Thot Shit.” True to Meg form, the single’s video has a sexy surreality brought to life by the commanding athleticism of her dancers. The clip is the work of Left Productions and French director Aube Perrie, who was recruited to the project in January apparently after Megan’s team saw his video for L’Impératrice’s “Peur des filles.”

The new video is a response to the outsize conservative outrage over last year’s “WAP.” Here’s how it plays out: A misogynistic and hypocritical male senator finds himself accosted by asses as he tries to get through a day. Megan and her crew twerk front and center in a grocery store, on a police car, in a restaurant, and at the front of a garbage truck—scenarios that underscore some of the most literal ways that Black women’s labor keeps American society afloat. With allusions to iconic scenes from The Shining and Nightmare on Elm Street, the video takes a final surprising twist after some time in surgery by Dr. Megan. (The closing shot has already inspired a line of official “Coochie Mouth” merch.)

The “Thot Shit” video came together in April over two 18-hour-day shoots. The crew even developed multiple specialty camera rigs in order to capture asses at every angle; the behind-the-scenes footage is predictably great. “She has such a huge sense of humor,” Perrie says, speaking over the phone. “It only brings more power and more energy to the message, because at the end of the day, it’s just fun. We’re obviously going after a certain political class, but we’re not harming anyone when, sometimes, they are.”

Pitchfork: Was there a pitch that you built from, or did you start from scratch?

Aube Perrie: It was collaborative. She sent the song “Thot Shit” and was eager to do something narrative, something Daring with a big D. It started with the term “thot shit” and it sounded to me like Megan doing what she usually does—reclaiming a term that is used to put someone down and really using it as a weapon.

She was deeply involved in the process. She loves horror movies, so we liked the idea of going for something nightmarish. The opening sentence was one of the first things that I wrote and sent to her. She loved it, and we started to collaborate on that to start.