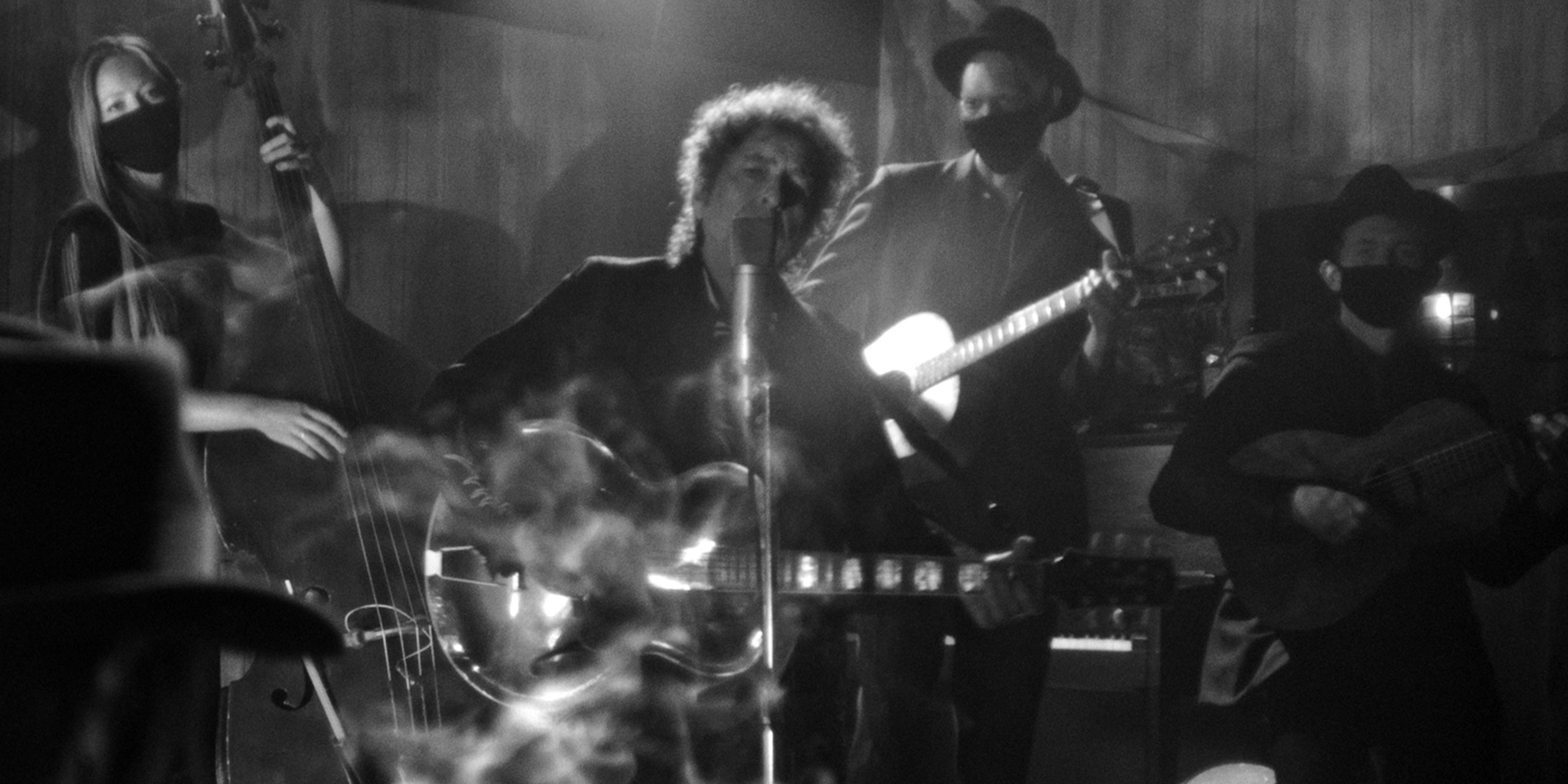 From the betrayed folkies who watched their hero go electric in 1965 to the polarized masses who heard him suddenly, bafflingly preach the word of God in the late ’70s, most Bob Dylan fans have a story about leaving one of his shows a little confused. For me—and, I imagine, many others who came to him in the 21st century—it involved seeing him at a baseball stadium in my hometown, where he spent the entire show facing away from the audience, playing mostly keyboard, and barking through nearly unrecognizable versions of the songs I fell in love with through his records.

Maybe I was expecting something more like the performances in Shadow Kingdom, his gorgeous new concert film, which has the feeling of a stylish art project despite being debuted via livestream platform Veeps and Live Nation last night. With a guitar slung over his neck, and a masked backing band whose mostly acoustic instrumentation feels like different shades of the same muted blue, the 80-year-old icon sings clearly, melodically, beautifully. Rendered in black-and-white, Dylan seems at times to want to burst through the screen, gesturing passionately, staggering slightly.

The film is subtitled “The Early Songs of Bob Dylan,” but that framing is a bit of a misnomer. None of its 13 songs predate his mid-’60s rock reinvention, and the most recent inclusion is a stunning rendition of “What Was It You Wanted,” from 1989’s Oh Mercy. Highlighting album tracks instead of major singles, Shadow Kingdom leans toward the 12-bar blues vamps, love songs, and deep cuts that have populated his recent setlists.

Seemingly recorded in a studio, the performances were arranged for the film in an interconnected series of music videos by director Alma Har’el, whose resume includes the 2019 indie film Honey Boy as well as videos for Sigur Rós and Beirut. She has a knack for visualizing the haunted barroom production that Dylan has favored on his modern studio albums: As he sings in dusky rooms filled with cigarette smoke and lamplight, mannequins and Western characters, the whole thing takes on a surreal, ghostlike quality.

With minor costume and scenery changes, he performs for a crowd of old-timey patrons who lose their shit on the dancefloor during “Watching the River Flow,” and to a sea of dispassionate cowboys staring into their beers as he sings “Just Like Tom Thumb’s Blues.” In moments like these, the title of Shadow Kingdom is not just a reference to the world of Dylan’s songwriting, but to the places and audiences where he imagines himself delivering his songs—a personal twist that gives a bittersweet and elegiac quality to songs like “Forever Young” and “It’s All Over Now, Baby Blue.” (In that sense, the atmosphere brings to mind the self-referential sprawl of David Lynch’s Twin Peaks: The Return—and not just because of the aesthetic similarity to the Roadhouse performances that closed most of its episodes.)