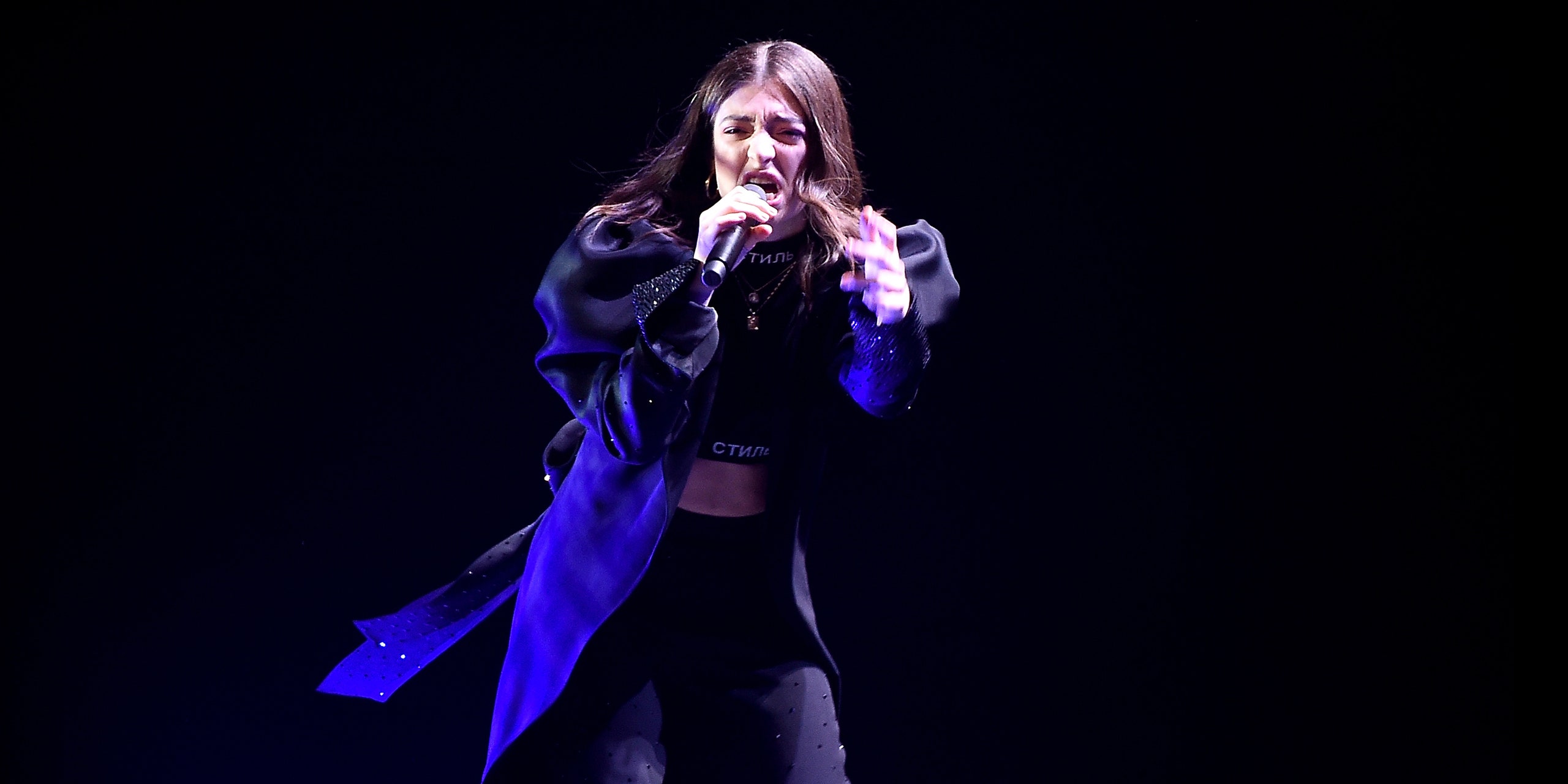 Earlier this week, Lorde shared the cover art for something called “Solar Power.” She included only a vague note, to fuel the conspiracy theorists among us: “Arriving in 2021 … Patience is a virtue.”

Patience is a necessity when it comes to Lorde. After releasing and touring her second album, 2017’s Melodrama, the New Zealander born Ella Yelich-O’Connor largely retreated from the public eye. Over the years, we heard a few peeps about new music. In November 2019, she shared a note about the sudden death of her beloved dog, Pearl, and how the loss had redirected the album. “I have lost my boy, and I need some time to see the good again, to finish making this for you,” she wrote. “It won’t be the same work—as anyone who has felt loss can understand, there’s a door that opens that you step through, and everything is different on the other side.” Then in May 2020, she offered a concrete update that she had been in the studio with Melodrama producer Jack Antonoff. “In my opinion, the greatest treat I can give you is work that will last ten, twenty, thirty years. And that kind of work takes time,” she wrote. “….I can tell you, this new thing, it’s got its own colours now. If you know anything about my work, you’ll know what that means.”

In anticipation of new music arriving soon and maybe (someday!) a tour, we’ve rounded up seven of Lorde’s best live performances, starting with her days as a witchy wunderkind and arriving at the unabashed joy of the Melodrama era. As anyone who has witnessed a Lorde set knows, she brings her heart and body to the stage. She bounces around wildly, beats invisible drums, and quivers her hands with such spirit that Bob Fosse would be proud. Behold.

When Lorde entered the public consciousness with “Royals” and Pure Heroine in 2013, no one knew quite what to make of her. She seemed to exist in two worlds: her low-range growl, bushy hair, and jerky dance moves were tools to convey a very specific strain of teen angst; on the other hand, some half-seriously speculated that someone of her talent and maturity level could not be a literal teenager. This strange cocktail was on full display in Lorde’s early Live on Letterman performance, particularly her rendition of “Ribs.” As she sang about spilled drinks, midnight streets, and lost innocence, she slithered and spasmed as if channeling a memory. A star was born.

Lorde’s dancing has been described as “bad.” A better way to describe it would be natural in the most gloriously unchoreographed manner. Case in point: the pure visceral expression of this performance of her Hunger Games track “Yellow Flicker Beat.” She starts things off in a small box with just flashing colors, a tightly framed shot, and her own intensity—more than enough for Lorde to work with. Soon enough, she breaks out of the cube and bursts forth, convulsing and thrashing around a group of dancers that are almost comically solemn by comparison. The best moment arrives in the final seconds when Lorde lets out the last notes, hits her mark, and smears her dark lipstick across her face.

When Nirvana was inducted into the Rock and Roll Hall of Fame in 2014, the surviving bandmates celebrated with a crew of star-studded guest singers including Joan Jett, Kim Gordon, and St. Vincent. With these legends as a backing band, a pink-suited Lorde tackled the complicated blend of regret and hope that defines “All Apologies.” Performing as a stand-in for Kurt Cobain would be understandably intimidating for anyone, but even just a couple years into her career, Lorde showed that she could be herself while also vibrating on a legend’s specific frequency. As Dave Grohl later told Rolling Stone, “There’s something about her that represented or resembled the Nirvana aesthetic.”

The day after David Bowie died, Lorde published a tribute to him in which she described feeling profoundly changed by their first meeting. Several weeks later, when Bowie was presented with a posthumous Icon Award at the BRIT Awards, his longtime backing band performed a medley of hits—only to be upstaged by Lorde in a Thin White Duke look. While others reached for color and boldness in their Bowie tributes, her “Life on Mars?” cover is appropriately straightforward: there’s no wild dance moves and the strength of her voice takes center stage, underscoring the humanity in Bowie’s songwriting that was too often overshadowed by his alien aesthetics. As the legend’s longtime pianist explained, Lorde was the ideal musician for the moment. “Some of David’s family members and David’s management had some suggestions she’d be the right one. They wanted to bring the next generation in.”

On Melodrama, Lorde grappled with heartache and solitude against a backdrop of euphoria. One of the record’s most devastating moments arrives with “Liability,” a piano ballad about feeling too complex for those around you and instead choosing yourself. She debuted the song live on SNL, dressed “like a moth, no sparkle, swaddled and floating,” as she put it, while seated on a piano bench back to back with Jack Antonoff. In a lovely touch, the producer’s piano is covered with objects that shaped the Melodrama sessions, from baby’s breath to a framed photo of Robyn. The almost-motionless performance cuts through the spectacle of the occasion and gets at the raw vulnerability of the song.

Every Melodrama era performance was special in its own way, but the medley of “Green Light” and “Perfect Places” at the iHeartRadio MMVAs might have been the closest to approximating the energy of a Lorde concert. Kicking things off with a slowly escalating “Green Light,” the performance arrives at its climax on “Perfect Places” when the singer joins up with a large youth choir clad in head-to-toe Adidas. On the recorded version of the song, a slew of multi-tracked Lordes provide the hook, which acknowledges how partying and taking drugs are just rungs on a ladder towards temporary happiness. But Lorde often speaks for both herself and a generation of kids who are consumed by the pressures and pleasures of being young; the accompaniment of her peers conveys the hedonistic melancholy that haunts them all. The longing for a lick of perfection practically bursts through the roof.

Before her scheduled appearance at the 2017 MTV VMAs, Lorde announced that she was suffering from a flu so severe that she required an IV. But ever the dedicated performer, she found a creative way to pull it off: Instead of singing Melodrama’s “Homemade Dynamite,” Lorde performed an interpretive dance in which she leapt across the stage, thrashed as much as she could, and was repeatedly hoisted into the air by a cadre of dancers. (Plus she didn’t even have to change out of sweatpants.) Though some viewers were confused by the performance, as Lorde later told Marc Maron, “I just danced! And I danced with full fucking joy! It’s sort of embarrassing to watch someone experience intense joy. Way more than pain.” Please, Lorde, never stop dancing.